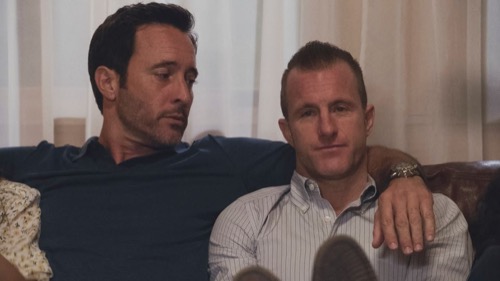 Tonight on CBS Hawaii Five-0 air with an all-new Friday, February 14, 2019, episode and we have your Hawaii Five-0 recap below.  On tonight’s Hawaii Five-0 season 10 episode 16 called, “Man Is A Slave Of Love,” as per the CBS synopsis, “On Valentine’s Day, Tani and Noelani are held hostage during a convenience store robbery.

Also, Five-0 investigates the murder of a Thai diplomat whose wife confesses to the crime, but Danny suspects she’s covering for the real killer.”

Adam asked to speak with Lou. He wanted to clarify things. He wanted his friend to understand that he was acting in Siobhan’s best interest and Lou did understand. He just didn’t know why Adam had to do it alone. Adam could have told the rest of the team what he was doing. They would have helped him. They would have all been there for Siobhan. Adam didn’t have to do it alone and the fact he chose to do so anyways is what Lou couldn’t move past. Lou was going to need time before he trusts Adam again. And thankfully he wasn’t going to let the lack of his trust affect his work.

Both men later got a case after McGarrett and Danny had gotten a call from the Secretary of State. The men were asked to come over to the Governor’s Building and there they were told about a murder. Lorena Massey murdered her husband Prin Khomsiri. He was a high-ranking member in the Thai Consulate and the US Government needed to handle this case with kid gloves. They didn’t want it to look like they were covering up for an American. They also realized there was more to the story than what Lorena was telling them.

Lorena told the authorities she murdered her husband. She later explained to Danny and McGarrett that her husband was abusive and that he had been so bad the last time that he sent her to the hospital. Lorena said she came home today. Her husband was apologetic as ever. He swore he’d never hurt her again and so Lorena grabbed a hammer and waited to sneak up behind him. She then smashed him over the head until he was dead. Lorena claims nothing triggered this killing. Her husband wasn’t threatening her again and he had his back to her.

Only Danny didn’t believe her story. Danny worked in domestic cases back on the east coast. He knows that the abuse comes in cycles. There was violence, apology, and then calm. At each moment, she would have been fearing for her life and so Danny wasn’t buying her premeditated murder. He thinks she was covering for someone. He suspects she met someone and that she’s been hiding this relationship from her husband. And so Danny had the team look into she could have met and secret messages on her phone.

The team found out that Lorena was using her calculator app quite frequently. It turns out the app has a secret messaging system and she’s been using it to contact Dr. Ray Paulson. He and Lorena have secretly been dating. Ray was also a doctor at the hospital Lorena visited. He was so upset to see her so beaten up that he said a few things and that made Lorena believed her boyfriend had murdered her husband, but she was wrong. Her boyfriend has an alibi for the murder and they Lorena so.

Once she realized her boyfriend couldn’t have done it, Lorena recanted. She didn’t kill her husband and she only made it look like she did because she thought she was protecting someone she loves. The team went looking for the real killer. They thought they would have the time to find him or her and unfortunately, they didn’t because Lorena’s husband forged her signature on several documents. One of them was her giving up her American citizenship. Lorena said it would be another way for him to control her.

The US Government also couldn’t protect her anymore. They had to hand her over to the Thai guard and so Five-0 stepped in. They grabbed Lorena and they were hiding her from the government. They wanted to hide her long enough to find the real killer. They also needed all hands on deck and so it was odd how Tani never came in. It turns out Tani and Noelani got wrapped up in a robbery. They had stopped at a store to grab water and then a husband and wife team came in with guns. And the couple tried to rob their place.

They were new at this. Their hands were shaky and the silent alarm had been pressed before they knew it. The cops later had them surrounded. The couple began panicking and so Tani thought she needed to act. She came up with a plan with Noelani and unfortunately it didn’t work because Noelani didn’t grab the wife’s gun in time. Besides that, the couple was more in less in control. They were holding people hostage for a while before the husband had a seizure and needed medical help. Noelani confessed she was a doctor and so she was allowed to help.

Tani also talked to the wife. She found out the couple was only robbing the place because they needed to raise enough money for the husband to get medical treatment and so Tani promised to speak up in their defense if they turned themselves now rather than later. So, the wife gave up. She handed over both of their weapons and her husband got to go to the hospital. Tani also missed out on the case. The rest of the team had handled it. They found out Prin was forced to leave Mumbai after he drunkenly hit a woman with his car. And that woman’s husband came to the island to kill him.

Lorena was freed. She also got to reunite with her boyfriend and so the team wrapped up their case. They also spent Valentine’s together by doing a movie night.

And Adam continued to have secret meetings with Kenji’s people.