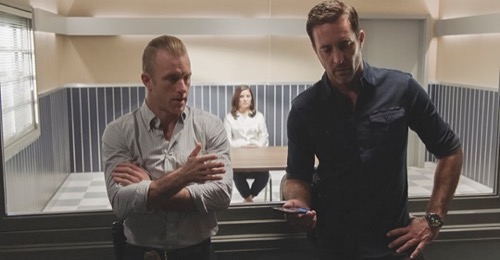 Tonight on CBS Hawaii Five-0 air with an all-new Friday, February 21, 2019, episode and we have your Hawaii Five-0 recap below.  On tonight’s Hawaii Five-0 season 10 episode 17 called, “He kohu puahiohio i ka ho‘olele i ka lepo i luna (Like a whirlwind, whirling the dust upward),” as per the CBS synopsis, “Harry Langford helps the team investigate a series of murders that follow the plot of a fabled unpublished crime novel from the 1920s; and Tani and Junior’s friendship takes a meaningful new turn.”

Junior is back. He left town to join a secret task force and because he was still in the military, he had to go. He had to leave Tani. Tani understood the position he was in. She wasn’t angry with him and she was there waiting for him when he returned. She greeted him as only she could. They were together while the rest of the team were welcoming someone else to the island. Harry Langford was back as well. The former MI6 Agent has since retired and written a book. He couldn’t put his own name on it because he used real events for the book. And so he hired an actor to pretend to be him for the cameras.

The actor was Michael Blanton. He needed Harry to guide him and so the two men used earpieces at all times. It helped Harry hide in plain view. He could still attend the Oahu Literary Festival and it didn’t get in the way of reconnecting with some old friends. Danny and McGarrett were glad to see him. They congratulated him on the book and they were also glad for the opportunity to see the festival. They’ve been meaning to get around to it for years. They were enjoying themselves when HPD reached out to Five-0 about a case. Two victims have been killed and they were both found with pieces of a story attached to them.

The story was an unpublished manuscript. It was the final part of the Deidre Naismith series which was a popular book series a hundred years ago and it was never finished because the author couldn’t bring herself to publish her last manuscript. She had killed her main character. She probably regretted putting that in and so she threw away. She threw away and someone else fetched it from the garbage. It had been a bellman she slept with. She had told him about it and he took the garbage the moment she fell asleep. It turns out this bellman’s family has been sitting on the manuscript until it was hunted down by Suzanne Ridge.

Ridge was an expert on the Deidre Naismith series as well as its author. She planned on publishing the last manuscript and so she was a suspect for a while. The team asked her where she was during the time of the murder. She had an alibi and she told them that she was eating breakfast with her assistant. Ridge hadn’t told anyone about the manuscript. She was going to reveal it at the festival and so McGarrett checked her possessions. He found the pen that belonged to the late author. Ridge said she had received it as a gift and it turns out it had transmitter inside of it. It’s how their killer found out what was in the manuscript.

The team tracked down everyone that had been at the even when she received the pen. They then cross-referenced it with everyone that came to Oahu for the festival and they found four people. The team showed their pictures to Ridge. She identified Collin Hansen as the one that gave her the pen. He, therefore, became their next suspect and so they investigated. He never married or had children. He stayed under the radar his whole life and he was staying at a nearby hotel. The team raided his room. They found evidence of Hansen tracing the author’s handwriting until he got perfectly and they also found photos of Ridge.

There was a third body that came up. It matched how the third victim in the book died and there was just one murder left it to go. That’s when the author had killed her main character. The main character was Ridge herself and so the team wanted her to cancel her book tour. She was going to tell everyone about publishing the manuscript at the festival. She was going to be surrounded by strangers and one of them was bound to be Hanse. But the team was soon split into two. Their old friend Harry had needed their help because the man he hired to be him had gotten kidnapped. The kidnappers thought Michael was this rich spy and they demanded he empty out all of his bank accounts.

Michael tried to tell them he was an actor. They didn’t believe him and they kept demanding money he didn’t have. Michael was still wearing the earpiece. He told Harry what was happening and so Harry came looking for him with Tani and Junior. The three of them located Michael using the earpiece. Harry then went into the building unarmed and he gave the kidnappers what they wanted. He gave them the money. They just got greedy and they wanted him to stay until they were sure they were millionaires. The trio was dealing with them as McGarrett and Danny walked in on Ridge being drowned.

The guys believed Hansen had snuck into the hotel room using an air vent. They traced the air vent and they found out it led to nowhere. It had all been staged. Ridge and her assistant had staged and murdered three people as part of a publicity stunt for the manuscript. The team arrested them both and they later found out what happened to Harry. Harry had a female associate collect his money back from the kidnappers and she was apparently still upset with him for ghosting her. And so she stole the ten million for herself.

Harry still lost his money, but he didn’t let that get him down and so he had a nightcap with the team.

The only one that didn’t show was Adam because Adam was collecting evidence against the yakuza and unfortunately they must have figured that out as well.