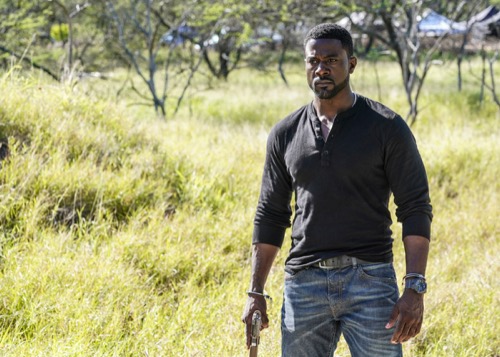 Tonight on CBS Hawaii Five-0 air with an all-new Friday, March 27, 2019, episode and we have your Hawaii Five-0 recap below.  On tonight’s Hawaii Five-0 season 10 episode 21 called, “A ‘ohe ia e loa’a aku, he ulua kapapa no ka moana (He cannot be caught for he is an ulua fish of the deep ocean),” as per the CBS synopsis, “After Steve receives a posthumous letter from his mother that contains a cypher.

Danny is attacked by someone willing to kill to steal it. Also, Five-0 must help Lincoln Cole (Lance Gross), an anonymous good Samaritan who’s in the crosshairs of some very dangerous people.”

Dorris McGarrett left behind a package. She asked that this package be delivered four months after her death and so her attorney followed her instructions. Michael Claypool flew out to Hawaii. He met with McGarrett and he handed over a package that was more a letter. McGarrett read the letter. It affected him in some way and he later visited his father’s grave. He was still there when Danny came looking for him. Danny needed McGarrett because they caught a new case and this time McGarrett didn’t want to hide behind work. He was rather focused on the letter. The letter was a cipher.

McGarrett knew he was supposed to decode it. He just wasn’t sure if he wanted to. McGarrett spent years believing his mother was dead and it was also coming up on the anniversary of his father’s death. He was going through a lot. He wasn’t sure if he wanted to open the door to wherever that letter was going to lead and so McGarrett threw himself into the case. He and the team were investigating two armed robbers who held up the Oahu National Bank. The robbers killed someone and they went into a diner where they ran into a mother and son. The robbers held the mother up at gunpoint.

They forced her to take them back to her apartment. They demanded she patches up one of them that was injured and right as she was about to – someone rang the doorbell. It was the busboy from the diner. He was returning a toy the young boy left and he noticed the mother was acting oddly. He later busted into her home, took on the robbers, killed one, and forced the other to run. He then disappeared. The busboy who had given his employer the name Michael Ellington was not the real Michael Ellington. The real man died several months ago and so this Good Samaritan had taken on his identity.

The team wanted to find this Good Samaritan. They also weren’t the only ones looking for him. The robber that killed had been connected. His name was Marc Acosta and his brother was high up in organized crime. Hector Acosta even knew his brother was at the morgue before the team had identified him. Hector came barging in. He demanded to see his brother and he broke into tears once he did. The team had tried asking him how he knew where Marc was. They asked him if he knew the other robber and Hector quickly clammed up. He wasn’t going to talk to them. The only he was willing to say is that he was going to handle this situation with Marc.

Hector Acosta was going to hunt down the Good Samaritan. The team knew they had to find him first and so they checked out the man’s apartment. They went looking for anything that could reveal his true identity, but all they found was a toothbrush and so ran the DNA off of it. It came back as belonging to Marine Gunnery Sergeant Lincoln Cole. Cole was heavily trained and he had just won the Purple Heart for a mission when out of nowhere he went AWOL. Lincoln disappeared. He hasn’t been heard of until now and so the team believed he came back because of his connections to the island. He was trained in Hawaii. He still has friends there.

The team looked up the man that trained Lincoln. They found him and this, in turn, lead them to Lincoln. McGarrett got close to him. They got into a fight and Lincoln was winning when Junior showed up. Junior threw it in McGarrett’s favor. They were able to bring down Lincoln together and they brought him to the icebox. They all wanted to know why Lincoln ran. Why he ran after the Purple Heart and why is he still running now? McGarrett has his own suspicions. He believes Lincoln blames himself for his last mission. He has lost five guys overseas and Lincoln was never the same after that.

He disappeared because he didn’t want to honor what he believed was a failure. He lost five of his fellow soldiers as well four of the guards that were protecting them and so Lincoln has been running for his past. He was being questioned as Hector made his move. Hector forced a tv camera to film his people as they held the mother and son duo from earlier hostage. Hector’s people demanded that Marc’s killer turn himself into them or they were going to kill two innocent people. The team knew it was Hector and his people. They were the only ones that had an interest and so the team tried to find out where the hostages were being held.

They studied the video. They even tried to get information from the tv crew and unfortunately, it was prerecorded. No one knew where the mother and son were being held. The team tried calling Hector to get his location. He sent them on a merry chase with so many proxy servers that it was impossible to locate and so the team couldn’t find him. They were just about to consider handing over Lincoln when the Military Police showed. They were alerted the moment the DNA test indicated Lincoln had been found. The MPs wanted Lincoln. They pushed McGarrett and McGarrett handed him over.

Lincoln was being taken back to base when he escaped. He knocked out his handlers and he ran off to meet with Hector’s people. He was going to turn himself in exchange for the hostages. Lincoln managed to contact them. He later did as they asked. He went to meet-up and he got lucky because the team arrived at the meet-up as well. They all worked together to protect the mother and son. They also worked at taking down Hector and his people. And together they did it.

Later, McGarrett had managed to arrange things so that Lincoln could be held on the island. He was under Military Review and he might get thrown out of the marines, but the higher-ups were taking into account all that he said to save Silvia and Manu and so that could still go in his favor.

Danny meanwhile took the time to talk to McGarrett. McGarrett found himself in a runt and he didn’t know how to get out of it. He talked to Danny. Like he seriously opened up to him and then they made light of it. Danny went back into the house for something. He walked in on someone robbing McGarrett and he tried to fight up. And sadly he failed.

The thief got away and it took the envelope that held the letter, but thankfully not the letter itself.