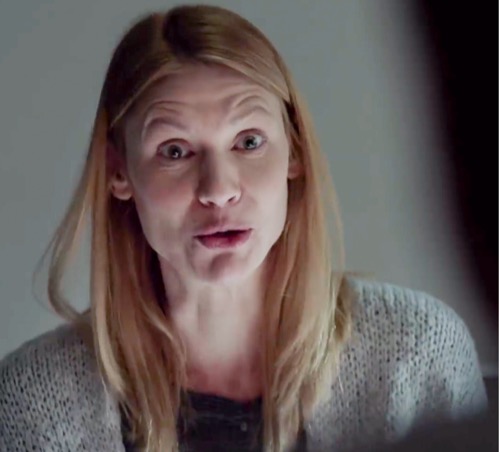 Tonight on Showtime their Emmy Award-winning drama series, Homeland airs with an all new Sunday, February 9, 2020, season 7 episode 1 called “Deception Indicated,” and we have your weekly Homeland recap below.  On tonight’s Homeland Season 7 episode 1 premiere as per the Showtime synopsis, In the Season 8 premiere, Carrie recovers in Germany; and Saul negotiates. Max, meanwhile, has a new mission.”

Tonight’s season 7 premiere episode of Homeland opens with Carrie waking, she had nightmares. She is in the hospital, the nurse tells her that she should take some Lorazepam to sleep, at first Carrie says no, but then she gives in. Then we see Carrie working out, she is running back and forth. On to some medical tests, and then she goes to see Doug, but he is not there, Jim, his supervisor is replacing him. Jim asks her if she was held in Russia for 213 days, she says yes, and she was interrogated by a man named Sergei.

Jim asks why Sergei stopped interrogating her, she says because she threw her feces at him. Jim says that Doug told him that she wants to be reinstated at the agency, she says yes. Jim tells her that a security clearance is impossible since she has 180 days unaccounted for. Carrie knows that and that is why she is working hard. He then asks her if she knows that she failed her polygraph, deception indicated.

Carrie wants to know what questions she failed, he says quite a few. She wants to know what that means. He says it could mean that she is working for the enemy. Carrie is frustrated, she gets up and Jim tells her to sit down. He says she did admit to giving the location of a safe house in Beirut. Then he asks her how she can be sure of anything when there are 180 days that she cannot remember.

The Marsa Malaz Hotel in Doha, Qatar. Saul meets with the press, he tells the US is going to get out sooner than later. Saul gets called away, Afghan VP G’ulom is holding a press conference. He says his country has been tricked to letting go of one thousand Taliban prisoners, he is in charge of them and will never agree to let go of a single one of them.

Saul seeks to find the Taliban delegation, he says there is no deal since G’ulom says he will not release the Taliban prisoners. He asks what if he were able to accelerate the release of US prisoners, that changes his mind. He says he will consider if he can choose the prisoners, and he needs to get G’ulom to change what he said.

Combat Outpost Steedley, Korengal Valley, Afghanistan; a helicopter lands, a man named Petrowski arrive on the bade, he is told to stay low and try not to get shot.

Jim and Dr. Foley meet with Saul, to give him a report on Carrie. Physically she is in good shape, sleep is an issue, her thyroid hasn’t leveled out. She is having a problem with her moods and memory. Jim says he is not concerned about her memory loss, he is worried about the polygraph. Saul says he is there because he needs Carrie right away, it’s an important mission. Saul asks if they have anything else against Carrie than a junky polygraph, they don’t.

Mike gets a call notifying him of a bad situation coming his way, a compromised officer, his old boss, Carrie. Meanwhile, Carrie is on her way, she just arrived at the CIA station in Kabul, Afghanistan. Carrie passes through clearance and meets Jenna, the newest member of the team who has been assigned to take care of her. Mike says the G’ulom meeting is set for Friday. Mike says he is glad that Carrie is there. Carrie is taken to her room, Jenna tells her that she has only been there for a month. She goes on to tell Carrie that it is bad out there. Carrie settles in her room, she is being monitored via her cell phone; meanwhile, troops are on the ground. Saul goes back to see the delegate of Pakistan. He says that he doesn’t know what to do about Pakistan, he just wants peace in the region. She says that it always ends up with chaos on her borders, their army is a joke. She tells him to at least make the Taliban think that they are not running for the exits.

Carrie changes into traditional local clothing to fit in. She manages to get to the main level of the building and gets on a motorcycle. One of the troops on the ground uncovers a device hidden under a fake boulder. Carrie is on her motorcycle and driving through the city, she makes her way to see Arman. She gives him a gift for Daria, he tells her that he is driving her. In the truck, he tells her that nothing has changed. They hear gunshots, he tells her it is probably the Taliban. They arrive at the checkpoint, Carrie gets out and tells him that she will be an hour at the most. She knocks on a door, a young boy answers, she asks him if his father is there, Roshan.

The boy lets her in. A woman comes to see her, Carrie asks if she is Sheena. She tells her that Roshan is there and she doesn’t know when he will be back. The woman tells her to go, the Taliban killed her husband because of Carrie and the CIA. She says they dragged him from the house and dragged him through the streets. Carrie is surprised, she says she never told anyone about her relationship with her husband. Carrie says she is so sorry. The woman tells her to get out of her house.

Carrie thinks back to when Jim asked her if she ever revealed the name of an asset. She is walking through the streets and some men with guns notice her, she sends Arman a text and says now, meaning they should leave. Carrie tries to hide in a house so the men don’t see her. Two women hide her inside their house.

Back to the troops, one of them is trying to fix the switch box that they found. Meanwhile, Carrie manages to escape and makes it back on her motorcycle. When she arrives in her room, Mike is there and is upset that she went out. He tells her that the meeting is rescheduled with G’ulom, it is in six hours. Mike asks her where she was, she won’t tell. Mike leaves, Carrie is having a panic attack.

It’s morning, the troops are still on the ground, but they are heading back to their base when they have to pass through a clearing area. One of the troops falls down, but he makes it to safety. More try to pass and all of a sudden, there is gunfire, they are being shot at. The troops make it back safe, and the switch box is working.

Carrie is at her meeting with G’ulom. She sees a man come out of the boardroom who she recognizes. It is Yevgeny Gromov.