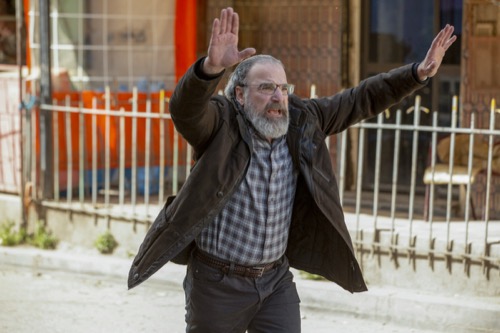 Tonight on Showtime their Emmy Award-winning drama series, Homeland airs with an all-new Sunday, February 16, 2020, season 7 episode 2 called “Catch and Release,” and we have your weekly Homeland recap below.  On tonight’s Homeland Season 7 episode 2 “Catch and Release,” as per the Showtime synopsis, “Carrie reconnects with an old ally. Tasneem seeks counsel. Saul finds hope.”

Carrie walks after Yevgeny Gromovits, as he is leaving out the door, he looks up to her. Carrie then goes in to see the Vice President, he asks her to sit down. She tells Abdul to tell her about the Russians, the ones he just paraded in front of her. He says it was business, she says it was not, they were intelligent officers. Abdul says maybe they are worried about her. He says he knows why Saul sent her there, to release one thousand Taliban prisoners so that he can have his fifteen minutes. He tells her to convince him. Carrie says those people are prisoners of war and when the war ends, they will have to let them go.

She says Saul sent her there because he needs to understand that they need unity now, in everything, they are partners. She says they have been partners for years, someone leaked him information on the peace talks and he used that information to compromise their position. She tells him that he needs to walk back what he said about not releasing the prisoners. He tells her that she can come in there and make demands without a gift, or a gun to the head.

Carrie calls Saul, she says it didn’t go well. And, she saw Yevgeny Gromovits. She asks Saul if he knows that he was there, he says no and she can’t touch him, it is part of the deal to get her released. He tells her to forget it, and get Abdul on their side. Carrie says she is on it and hangs up. Saul gets interrupted, Max picked up an intercept of a command outpost, he says it is Haqqani. There are two people talking, Max can’t identify the other guy, Saul thinks it may be Haqqani’s son, who else would get away with speaking to him that way.

Carrie goes to her desk and finds an envelope, inside there is a piece of paper and Samira Noori is written on it. Carrie wants to flush her out, she does some research and sees she is looking for a job, she wants a posting to bring her in.

Abu Nakhlah Airfield, Doha, Qatar. A plane arrives, an ambulance takes one of the passengers away.

Carrie is thrilled, the interview worked for a job, Samira Noori is coming in and Olivia is going to do the interview.

Saul is alone with the passenger they took off the plane, he tells him he can go home but first he wants him to take a message to Hassam Haqqani. It’s a letter, that he will want to receive. The man asks then what, and Saul says he is free.

Carrie watches Samira Noori as she leaves for the interview. Carrie goes into her apartment to search for her place. They can’t find anything and Carrie is convince that something has to be there, she was married a few months when Gulum killed her husband, she didn’t rush back to her village, she stayed. It is like she bided her time. Carrie notices that there is a full-body coverup in the closet and is surprised to see it as Samira barely wears a scarf.

Saul gets into a helicopter and then lands, he is heading to the border with the man he brought with him.

Samira Noori arrives for her interview, she signs in. Olivia welcomes her and she is the one who is going to interview her. During the interview, Olivia makes a mistake and says that Samira has experience with an audit. Samira says it is not going to work out, she gets up to leave but takes a photo of Olivia and leaves. Olivia calls security and tells them not to let her leave, she took a picture of her and it will be all over Kabul.

Saul is in Peshawar, Pakistan. He gives the man the note and tells him to put in his hands, he will know if he does. Saul is going to wait three days for a meeting with Haqqani.

Carrie asks Olivia what happened, she says that she lost control of the interview. Olivia had Samira captured, she is in a room with Carrie who tells her this is a mistake and she is very sorry. Carrie tells her that she works for the CIA, she shows her a disk that she found in her closet, sewn in a burka. Samira is surprised to see that Carrie broke into her home. Carrie says she saw what was on it, personal files from the army. Carrie says she needs her help, tell her what these files mean and they can work together. Carrie says both counties are trying to make a deal with the Taliban. Samira is upset, she tells her to get out of her country and leave them alone. Samira says she will get Gulum herself. Carrie urges her to work together to get him, alone she will accomplish nothing.

Carrie calls Saul and tells him about the personnel files. He tells her that the only thing that matters is to get Gulum back in line.

Carrie goes back to see Abdul, she shows him photos of what was on the disk. She says that it proves that he stole from his own army, about a hundred million. She gives him a deal, two hours to walk back his statement about the prisoner exchange, says he misspoke and fully supports the prisoner exchange, and then the disk will be between her and him.

Saul gets a call from Max. in the last four hours, there have been a lot of calls in Pakistan, and it bothers him where the calls are, they are getting closer to her. Pakistani intelligence could know that Saul is there. Meanwhile, Saul is being watched. Present Gulum makes his announced that he fully supports peace.
Saul finds out that there is a convoy coming toward them, he is outside, he sees them coming and tells them to turn back. All of sudden, someone from the roof shoots at the convoy. Saul is grabbed and hooded and taken.

Carrie is in a bar, she goes to the bathroom and sees Yevgeny Gromovits, he tells her that he left the note with Samira’s name on it – then he vanishes.