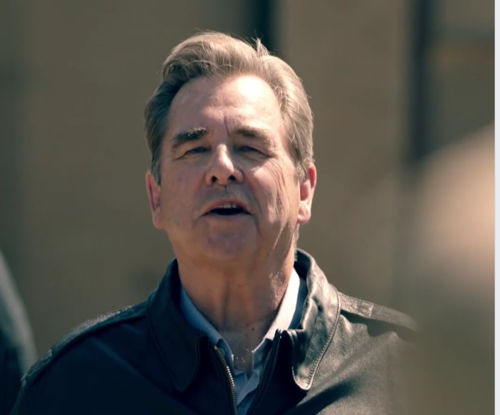 Tonight on Showtime their Emmy Award-winning drama series, Homeland airs with an all-new Sunday, March 1, 2020, season 8 episode 4 called “False Friends,” and we have your weekly Homeland recap below.  On tonight’s Homeland Season 8 episode 4 “Chalk one Up,” as per the Showtime synopsis, “Saul plans an announcement. Carrie gets a surprise.”

Carrie is back, her meeting with Yevgeny is over. She goes upstairs, about to go to her room when she hears something, she listens in a bit and then walks off.

Samira Noori is walking in a market with a friend when a man hands her an ice cream. Her friend tells her to take it while she takes a selfie with the men and tells them it is ok, it is a cease-fire.

Carrie is searching the room where she heard the voices, military police come in and ask them to go with her, furthermore, Saul is fully aware of the situation. Carrie gets in a car with them and they drive off. She sees a sign for Bagram, one of the men confirm she is going there, but won’t say anything else. They arrive at an airport, and Saul is there. He tells Carrie that the President is on his way there to make a framework for peace. He will be met by the Afghan president. The president asked for her to be there when he lends, he wants to speak to her. Saul says they did it, step one anyway.

The President’s Palace, Kabul. Naseem is there, she is entering the front door. She walks up the stairs and goes inside. She sees the General, she tells him the American’s reached a new agreement without them, but expect them to applaud them. She says her president got a call from the US president that Pakistan better is on board with everything, or they are going to implement sanctions against them. Naseem goes to get her cell phone, she wants to leave. Saul sees her and tells her that she is not leaving, she is staying.

Samira makes a meal and sits down with Bilal Khan. He tells her that she should return to the village, nobody has seen her since the funeral and it has been two years. Everyone worried that she is alone. He says she is his brother’s widow. He says they had the elders at the house, it is time for her to remarry. He says he will take care of her as his brother did. She tells him to leave.

The President’s plane lands, Carrie is there in the hanger waiting for him. He gets off the plane and poses for pictures first with the Afghan President. Then the US President goes to speak to Carrie and thanks to her for everything she does. He says he read the reports on what she went through in Moscow, and since he can’t thank her publicly, he wanted to privately, face to face. Carrie is speechless. He says he wanted her there to see the ending of a war that she helped end, and the longest in history. He tells her that he is flying with President Daoud to a combat post to tell the soldiers on the front line that they are going home. He puts on a bulletproof vest and heads out with his security. Carrie walks away, then gets back in one of the cars.

The President is in a helicopter, on his way.

Samira is in her apartment, her brother-in-law is at the door and asks her to open it, he apologizes for offending her. Samira opens the door, he tells her that he only wants the best for her. He is there with other men, he tells her to gather her things, she is going with them.

Samir calls Carrie and tells her that she has to help her, she says her brother-in-law is there with two friends and wants her to go back to the village with him. Samir urges her to come and save her. Samir starts to pack up her things. Carrie tells her drive to go straight, a woman’s life is on the line and she needs to help her.

Max hears the helicopters arrive on base, he heads outside with everyone else. The two helicopters land. Saul goes to the podium and gets everyone’s attention, he tells them that their President was welcomed by president Daoud at the air force base. He wanted to show them a message about peace, from the front line of the war.

Both Presidents get out of the helicopters and face the troops. The US President introduces them to President Daoud, he says that he wanted to come up there to tell them that there sacrifice and courage has helped President Daoud to negotiate for peace. He tells them every one is watching back home. And, before he left Haqqani agreed that no terrorist will find refugee in Afghanistan again. They agree on peace and are not prepared to send anyone else to die at war, time for them to come home. Max is smiling, so is Saul. Naseem looks disappointed. The US President takes pictures and shakes hands with the troops.

Meanwhile, Samir can’t stall much longer. Carrie tells her driver that they need to make a move on. She arrives at Samir’s apartment, gets out of the car, walks down the street, only to see a car outside with machine guns.

Max takes his bags and goes to head out the door, two troops try to stop him, but end up moving aside and letting him go. Max gets closer to the helicopter and tells one of the officers that he is not going, he turns around.

The two presidents are heading back to the helicopters. The US president gives the troops a thumbs up.

Samir is covered head to toe, her brother-in=law puts her in a car. Carrie is there, so is her driver, they put a gun to his head and steal Samir away. Samir is with Carrie and she is crying.

Saul gets called away, he gets in a car and leaves. Four minutes ago the president’s helicopter disappeared off the radar. Actually, the two presidents were on board. Saul is heading to the CIA office.

Carrie has to return to base, Samir thinks it is because of her, but she says it is not.