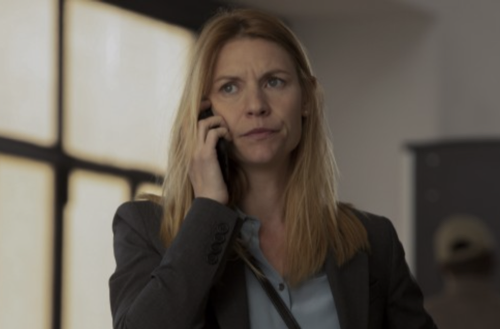 Tonight’s Homeland opens with Carrie is washing up and getting ready for her day. We see Max walking in the desert, there is a man behind him that has him at gunpoint. Max tells the man that his people will pay big money for him. The man stops Max from walking and ties his hands together. Max sees a plane over him and starts to make a run for it when the other man is peeing, in the end, Max gets himself shot.

The Vice-President is sworn in as President and holds a press conference to tell the American people.

Carrie asks Saul if anyone has found Max, nothing yet. Saul tells her that they are doing what they can do.

Saul heads into a meeting, Carrie takes off upstairs, she just wants to find out if they found Max because he was holding the flight recorder. Carrie overhears the FBI there and they want to speak to everyone. Carrie leaves, she gets on her motorcycle and heads out.

Meanwhile, Hassaim Haqqani’s loyal advisor thinks that he was responsible for the attack.

Carrie goes to see Yevgeny Gromov, she asks him for a favor and says she earned it. She says one of her people went missing, she thinks he is still alive and she is worried the Taliban has him. She asks him to find out. He says he wants to help, but she has a surveillance blanket over there. She says she can’t take down their monitoring where two presidents were shot out of the sky. He says he is just asking for two minutes. She tells him at 3:00 pm in the afternoon he will get his two minutes.

Saul is with Hayes and President G’ulom who has 300 Taliban members in a soccer stadium for potential execution. Saul says that Haqqani did not order the hit, and for all he knows, maybe he did. G’ulom tells the two to see themselves out.

Carrie is back in the office, Vanessa, and the FBI agent wants to meet with her. She asks her when she arrived in Kabul and when she found out the President was going to be there. She mentions that the President wanted to speak to her, he thanked her. Vanessa gives her an email address to contact her it and says they are done.

Carrie goes to her computer. Mike and Jenna listen to an audio of Carrie and Yevgeny talking when they met at the water fountain. Mike is stunned, it reveals that Carrie’s entire debriefing of the encounter is a fake. Mike tells her he has to give it some thought, and he instructs Jenna not to let Carrie out of her sight.

We see Max, he is handcuffed to the bed and knocked out with morphine. IT appears that his kidnappers don’t know how important the box is in his bag. The kidnapper heads to a shop and sells the bag and its contents, not realizing what the box is, the store owner focuses on the other items.

Haqqani finds out that G’Ulom has put a price on his head, his advisors tell him that he needs to leave Kabul. If he surrenders, G’Ulom will free the 3000 men in the stadium, if he doesn’t, he will kill them.

The President is talking with Saul, he tells him to speak to G’Ulom and draw a line regarding the 3000 lives. The President says that he could be bluffing, Saul says no.

The President gets on the phone with G’Ulom, he starts talking about the Taliban fighters in the soccer stadium and he wants Haqqani in custody as well. He says if he executes the main it will destabilize his whole country.

Carrie goes to leave the building, Jenna is following her. She listens outside the door, Carrie opens it up and asks her If she needs anything, she says no. Inside, Carrie runs down the hall to another room and takes a picture of one of the screens. Carrie is in the computer room, it is almost three o’clock, she pulls a plug for the two minutes without anyone noticing.

Jenna goes to see Mike and tells him that Carrie shook her, for about 15 minutes. He tells her to write it up.
Two days ago they were ending the war, Saul can’t believe the position they are in now. Mike asks Saul if he has a minute. He shares the details of the recording and says she is lying about her relationship with Yevgeny and aided in the assassination of the President of the United States.

Saul goes to see Carrie and asks her to characterize her relationship with Yevgeny. He says that Mike recoded the meeting, he knows she lied to him and now she is lying again. He says he heard it, all of it. He says it is his fault, he put her in a terrible position bringing her here. He says he has to send her back to Germany tonight, the doctor said she wasn’t ready. Saul says she told Yevgeny things that she never told him, about Franny. He says this is the reason she was in a recovery facility, and this is the reason she is going back.

Saul says she told the President he should come to Afghanistan, and the FBI thinks that she is involved and will be part of an investigation that will frame the rest of her life. Carrie says she doesn’t care, she wants to find Max. Saul tells her that in thirty minutes she will be escorted to a plane, and go willingly or in handcuffs.

Jenna escorts Carrie to the airport to make sure she gets on that flight. Just as Carrie is leaving, she sees Haqqani arrive. Saul hears some troops screaming, he turns around to see what it is. The troops have Haqqani on the ground, Saul says to let him up.

At the airport, Carrie starts talking to Jenna about her wanting to find Max and the flight recorder. She says she printed some surveillance documents, they are back on her desk and somebody should look at them.

Meanwhile, Max is not in good shape. His captor is there, he asks for his backpack. The captor says no more bag, it is gone. Max shouts that they need to get it back.

Carrie’s flight is boarding, Jenna sees her get her passport checked and got to boarding. As Carrie is walking through, Jenna keeps an eye on her until she is out of sight. Carrie gets out, she takes stairs and gets on the tarmac, Yevgeny is there to pick her up.