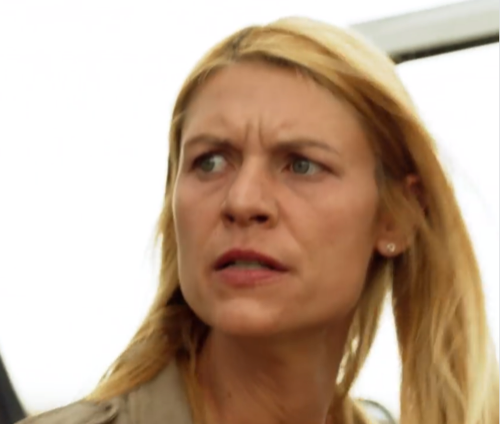 Haqqani is in a cell, the guards go in, put shackles on his arms and leads him out of the cell to a courtyard, where he is strapped to a pole with a firing squad facing him. At the same time, President Hayes calls G’ulom and tells him that the moment he kills Haqqani, Max will die. Hayes says nerves are quite raw now in the US and he doesn’t want another American death to add to it. Hayes tells him that he needs some time, G’ulom agrees to 24 hours.

Carrie gets a call from Saul, she tells him it is quite but messed up. He tells her about the stay of execution for Haqqani, and Max’s situation is stable, he is on the radar with the highest level of government. Saul then meets with his team and tells them he hopes they have a plan. They video conference Hayes and say they would like to send an extraction team to Max on foot. Hayes wants to know what are the odds, they are 50/50 at best.

Saul goes to see Haqqani, tells him that his son has taken an American hostage and it bought them some time. Haqqani tells him that it is up to him to continue what they started. All of a sudden, the guards come back into the cell and pull out Haqqani. Saul is confused, he tells G’ulom that they had a deal. G’ulom tells him to speak to his president, he finally came to his senses. Haqqani tells the guards to tie Haqqani to the post again. Saul says to G’ulom that if he kills him there will be blood on the streets. A guard goes to put a hood over Haqqani’s head, he refuses it. G’ulom calls the order, Haqqani is shot with four bullets. But he is not dead, he is still alive, G’ulom tells them to reload, and again he is shot, this time he is dead. Saul looks disturbed, G’ulom leaves and walks right past him.

Yevgeny tells Carrie that Haqqani has been shot, it is already all over the internet. Carrie is watching Max, just as he is shot with multiple bullets and his captors flee. Carrie runs to him, Yevgeny yells to her.

Carrie calls Saul and tells him that Max is dead, he told him where he was and he did nothing. She asks him to come to get his body, he says yes, then tells her that she has to come in. She says she is with Max, he knows where to find her. Yevgeny and two of his men show up, she tells him that she will help him lift Max’s body.

Jalal’s son interrupts a meeting, Firouzz who was Haqqani’s right hand, tries to rouse support for peace. Jalal says his father is not dead, he is his father and they must all remember the young Haqqani and his beliefs, not the old Haqqani. Jalal is the one who took down those helicopters.

Back at the Whitehouse, John calls a friend and asks her to get dirt on Wellington. Anything he can use, she tells him not to worry, if there is something, she will find it.

Yevgeny asks Carrie what is the plan, she tells him that she is sure he doesn’t want to be there when special ops arrive. She talks about Max with him. Carrie starts crying and throws herself down on the floor near Max, Yevgeny goes to comfort her, he hugs her.

John Zabel’s friend brings him a video of the meeting that Firouzz held when Jalal said that he shot down the helicopters, his father was an innocent man. John brings the video to Hayes showing that Jalal has an RPG and he shot down the helicopters. John tells him that he has to go on the air, he can’t use the script that Wellington gave him, he needs to use the one he prepared.

Saul is about to leave to get Max’s body when he sees Hayes on tv saying that Jalal shot down the helicopters and he has a message for Pakistan, to arrest Jalal or they will go get him themselves. Wellington is furious, he tells John that he took a nobody and turned him into a folk hero; he is starting a war.

Carrie is outside with Yevgeny, near Max’s body when she sees Saul arriving. He tells her that they are going to give her a hard time, she says she can’t stay out there forever, he says why not and smiles. Yevgeny walks off and Saul’s helicopter lands. Yevgeny and his men stick around, from a distance.

Saul says hi to Carrie, two men take Max’s body. Saul tells her what Hayes just did, asks her if she knew anything that could help, he would be grateful. She says she has a lead on the black box, it was taken from Max, but he told her. She says she wants no more crap from anyone, not from Mike and not from him. Saul says they need to go they were only extended a small window.

When Carrie arrives at the helicopter, one man says they will have to search her. Saul asks what is going on, Carrie pulls a gun when she sees handcuffs. Saul says it was a mistake, she calls him a liar. Carrie runs towards Yevgeny, Saul gets on the helicopter, furious, he leaves with Max’s body. Carrie looks devastated by what she believes is Saul’s betrayal. She tells Yevgeny there is something that she didn’t tell him, something she needs to find, the black box, she knows where it is.