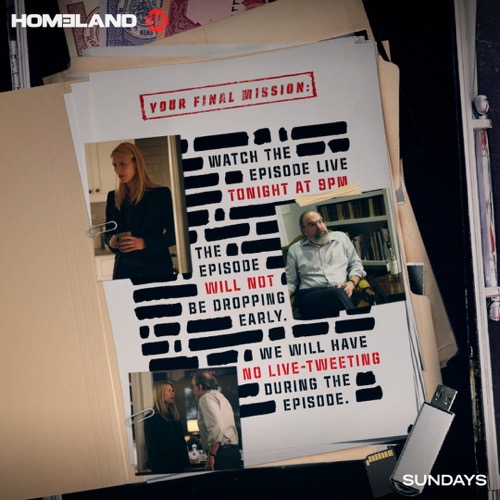 We see Nicholas Brody, in his speech telling people the truth about his captivity. Carrie is driving in a car. Carrie arrives at Saul’s house and lets herself in.

The next day, we see Saul, David tells him that Jilal was not in the farmhouse that they bombed. Hayes has been on the phone with the prime minister who didn’t say much. Saul wants to be on the President’s schedule so he can speak to him.

Tasneem is on TV, she tells people that an American aircraft violated their air space, and President Hayes gave Pakistan an ultimatum. She says that Americans have given them no choice but to arm their weapons. Carrie is listening to the broadcast. We also see Saul’s asset, Anna. She goes to see the Russian director she works for and sees the voice recorder on his desk. He tells her they are on the verge of a great victory for the Russian people.

Carrie gets the poison to kill Saul.

Saul goes to the President’s office and he is not there, John says he can talk to him. He tells him that he is ignoring the facts on the ground, he told him that Pakistan wouldn’t lay down. Saul tells John that the Russian’s have the flight recorder from the former President’s helicopter. Nobody shot it down, it was an accident, a bad blade. John says he wants to listen to the recorder. Saul says he is missing the point, the Russians are not giving it back for a reason, he doesn’t know why, but they need to find out. John says it sounds like he is making shit up. Saul tells him not to be the schmuck to take them to war twice in twenty years for no reason.

Saul asks David to do him a favor, reach out to the Times, and set up an appointment. Saul arrives home and Maggie is there, a colleague saw Carrie at Langley the day before, she is surprised because she hasn’t heard from her. Saul says it is strange.

Its night time, Carrie drives to Saul’s house and sits out in the car for a bit. There are tears in her eyes, she gets out of the car, grabs the poison, and puts it in her purse. She sees a man sitting in a car lighting up a cigarette. She goes into the house, finds Saul in the library, and listening to music loud. He asks her what the heck is going on.

Starting with why she didn’t check in on Franny since she got up, she says she was waiting for the weekend. He says bullshit, she is leaving, so why come back at all. She says she came back to try and stop a war, anyway she can. She tells Saul that she made a deal with Yevgeny, the flight recorder in exchange for his asset. He says there is no asset. She tells him that she knows who it is and knows how they pass their intelligence. The two argue back and forth, Carrie tells him to give her the assets name, he won’t.

He tells her to go upstairs and pack her things she is turning herself in. Carrie goes upstairs, takes out the rubber gloves and the poison. Saul walks in and asks her what she is doing, she says nothing and then touches him with the gloves, he asks her what she did, then falls over. She goes downstairs and flashes the outside light on and off. Carrie goes back upstairs and asks Saul if he can hear her. He can hear her, she tells him a team is coming and then it is out of her hands. If he tells her now who she is, she will call them off.

She says that she knows him, if she is as valuable as he says, he would have put a mechanism in place in case of his death and she wants to know if it is her. He won’t tell her and she tells him it is not worth it. Two Russian men are there for Saul, Carrie tells him to take him. They carry him to his bed, prepare an injection while Carrie is watching. She pleads one last time for him to let her off the hook and not make her do this. She is begging him. He tells her to come close and then tells her no. She won’t give him, she tells the two men they will do the fallback as they discussed.

Saul is tied to a chair, he is coherent. David is calling, he tells them that he is thirty minutes late for a meeting and will send someone to the house if he doesn’t speak to them.

The West Bank, Carrie gets out of a taxi to go see Saul’s sister. She wants to know if he is dead. She says he had a stroke, he managed to call 911 but by the time the EMTs got there, it was too late. He is at GW hospital until arrangements can be made. Carrie says she took the liberty of booking a flight for her. Carrie goes into the house and helps her to pack. Carrie tells her that Saul said he gave her something for safekeeping if anything ever happened to him. She says she is just like Saul, always an interior motive.

She says he was there three years ago, he used her as cover, before that, they hadn’t seen each other for twelve years. She says she is caught up on her own grief and forgot to give her condolences, she lost him too. Carrie says she doesn’t want to pressure her, but she needs what Saul left for her. She pulls out a can envelope from her safe and gives it to Carrie, it is a flash drive. Carrie says she is relived, she is so happy that she had it. Carrie asks her if she can stay there until someone from the agency comes to pick her up, she says yes.

David gets a message from Saul saying he is on his way in and now knows something is not right because Saul knew the meeting was in Alexandria.

Saul’s sister gets in a taxi, while she is distracted, Carrie steals her cell phone. They hug, she leaves.

Yevgeny gets out of a car in front of Saul’s sister’s house. Carrie has her gun drawn and when he comes in, she tells him to put his hands on the wall. She says she has the name, he promises to turn over the flight recorder within thirty minutes. She hands him a piece of paper, with a name on it. She shows him a video of Saul who made a video to her if he died, he gives up the name of his asset who has been spying for over twenty years.

Saul is ok, the police are at the house, he puts in an order to Scott to keep his asset safe, she tries to run, but it is too late, there are four men after her. She and Scott hide in a room, she asks him for his gun, unless he is willing to kill her himself. He won’t do it, but he does give her his cell phone to speak to Saul. Anna tells Saul that she wants to end this on her terms, she asks Saul to talk to Scott and ask him to give her the gun. He tells him to do it. She has the gun, Saul is on the phone listening to everything, she shoots herself in the head.

The Russians look like the good guys, they tell the US President to stand down their troops there is no reason for war.

Yevgenny comes outside and tells her the asset is dead, she killed herself, Saul managed to warn her somehow. Carrie says there was counterintelligence, the two-run to Yevgenny’s car, and head to Gramala, then on to Sierra.

Two years later, Moscow. Carrie is getting dressed to go out, Yevgenny asks if she is almost ready, she says in a minute. He asks her if she is excited, she says very. He then tells her to close her eyes and puts a necklace around her neck. She thanks her. Carrie comes downstairs all dressed up, she goes into another room to get her purse and sees a photo of Franny. She takes a moment to think, look at the posters of cases on the wall, walks out of the room to join Yevgenny.

Saul is packing up, his sister is with him and gives her their mother’s silver. She begs him to move to Israel with her. The landline is wringing, his sister goes to answer it. She comes back in the room, it was a wrong number, a man was looking for a professor Rabinow.

Carrie and Yevgenny are at a concert. Carrie gets up and tells Yevgenny she will be right back. She goes to the ladies’ room and is touching up her makeup alongside another woman, who switches bags with her.

Saul goes to see the man that called his house, an envelope was left for him, Saul says impossible. Saul is back at his house with the envelope, his sister is there and she asks her to give him a minute.

Saul opens the envelope, it is a book from Carrie.

The book is called, Tyranny Of Secrets why I had to betray my country.

Saul thinks about it for a minute.

Then he remembers that his former asset used to hide secrets in the spines of novels.  Saul gets a knife and opens the spine.

There is a message from Carrie telling him about a weapon and how it can be defeated.  She tells him instructions to follow.

Saul smiles, Carrie has become his asset replaces the one who was killed.