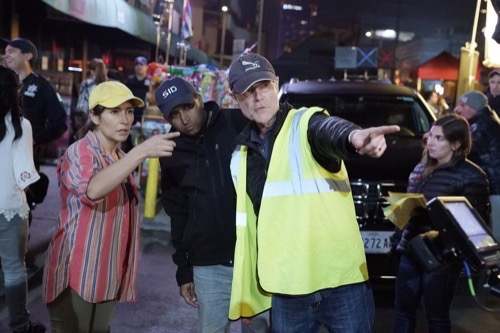 Tonight on ABC their hit drama How To Get Away With Murder (HTGAWM)  airs with an all-new Thursday, April 2, 2020, episode and we have you How To Get Away With Murder recap below!  On tonight’s HTGAWM season 6 episode 10, “Annalise’s disappearance is exposed; Michaela and Connor are charged with Asher’s murder; Bonnie discloses a secret about Tegan; Gabriel becomes a murder suspect.”

Asher was the mole. He was the inside source passing on information about Annalise and the crew. He was also later murdered. Someone killed him to stop him from giving the feds information and now the feds believe they found his murderers. They arrested both Michaela and Connor. The two of them were innocent and they said cameras at the house could prove it, but someone had managed to hack them and arrest the footage from the cameras. There was no evidence to prove they were innocent. There was actual evidence proving that they were guilty because the feds have the murder weapon and it supposedly had Michaela’s prints on them.

Asher was murdered. His body was left outside of Gabriel’s front door and Gabriel claims he didn’t hear anything. He was forced to explain himself to the feds. They came in demanding answers and Gabriel didn’t have any. He had no idea how Asher made it to his door. He said had nothing to do with it and a look back shows that he wasn’t there when the truth came out. The truth about Asher came out to everyone. Oliver, Connor, and Michaela found out together. They hit Asher over the head and he was later able to get up. Asher then went to Bonnie’s. He tried to get her confessing to murder on tape and she saw right through him.

Bonnie even called Frank once she realized it. She called Frank and she told him that Asher turned. Asher had tried to play her. He went over to her house and he tried to claim that Laurel was the mole. He told her that Laurel called them. She explained to them how she was on the run and that Tegan was the one to help her disappear. Laurel explained herself because she didn’t want her friends to think she was the mole. Asher used Laurel’s call to say that she was the mole and he was trying to put the blame on her, but it didn’t work with Bonnie. Bonnie saw through him. She warned Frank and later the two arranged for Frank to “drive” Asher home.

Fast-forward, Oliver is confessing to murdering Asher. He was freaking out because he thought maybe he really did kill Asher and he died from a slow bleed and so it’s a good thing his lawyer showed. Bonnie showed. She talked to Oliver. She told him she saw Asher after he did and that Asher was okay. She also said she didn’t kill Asher. She put the blame on Xavier’s people and that’s a common theme. Everyone was blaming Xavier. Tegan was doing the same as she was doing her best to help Michaela and Michaela should have told her the truth. She instead kept quiet. She didn’t tell Tegan that Asher was the mole.

She also used her one phone call to call her biological father. He later showed up with a high-priced lawyer and so Michael was well-represented. Connor’s family was even doing their best for him as well. His mother Pam showed up at the police station and she told Frank that she didn’t want Annalise’s people to touch Connor’s case. She said that Connor was in trouble because of Annalise. Annalise took on the Governor and that’s what put a target on their backs. Connor told his mother all about it. She, therefore, didn’t want Annalise or anyone connected to her to help Connor and she told Frank to stay away from her.

Frank drove Asher home that night. He and Asher had talked on the drive there and Asher had tried to get him to confess to killing Wallace Mahoney. Frank told him he must be confused. He had already been worn by Bonnie and so he didn’t fall into the trap. He also conveniently walked Asher home that night. There was no need for it. Asher hadn’t taken the mushrooms. He wasn’t unsteady on his feet and so he didn’t need help. Asher was later murdered right in front of his apartment. It could have been Frank or it could have been someone else. The running theory is that it was Xavier because someone erased the footage from the house and Xavier was the only one who would do it.

Only Frank went into the apartment. He searched the apartment for evidence and he found a hidden compartment. Frank grabbed something from there. He also didn’t let Asher know he knew and so Asher still tried to play him. Asher tried to get him to confess again on tape. It didn’t work and it led to an awkward hug between Asher and Frank. Frank left the apartment after that. Asher was also murdered after that. There was no telling what happened back then and the present-day situation was dire. The AUSA was forced to drop charges against Oliver. They still had Michaela and Connor on the line and so the feds offered them a deal.

The feds wanted them to confess to everything. They wanted both Connor and Michaela to admit to all the murders and then say it was Annalise’s fault. The feds wanted Annalise. They didn’t care about her students and if anything they were more desperate now than before because Annalise has disappeared. No one can find her. She left her apartment one day and no one has heard from her since. Frank thought Nate had helped her escape. He reached out to Nate and Nate said he didn’t help Annalise. He made it known that he would never help her again. Nate was done with Annalise. He said he wasn’t done with the others and that wasn’t true.

Nate later went knocking on Bonnie’s door because he wanted answers. He wanted to know if Frank killed Asher and she swore it wasn’t him. She even asked why he was interested. He said that he wanted to be a good guy and so she laughed in his face. She told him if he truly wanted to be a good guy that he would turn himself in for the murder she committed. Bonnie technically had a point and so Nate didn’t argue with her. It didn’t matter that he was worried about Asher or the others. He couldn’t help them and so they helped themselves. Both Michaela and Connor cut a deal to protect themselves and each other.

They were still best friends in spite of everything. They protected each other like always and now the feds are looking for Annalise.

Unfortunately for her, they later found her.