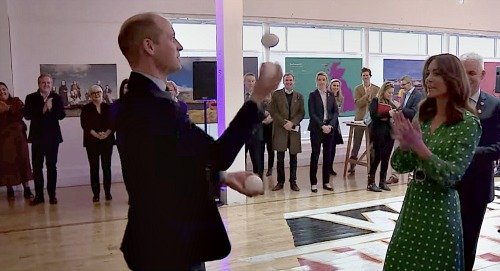 Prince William and Kate Middleton managed to have a special date night and keep it from the media. The royal couple let the information slip while talking about a recent event they attended. Plus, William recently revealed that he has a secret talent, which is juggling! He demonstrated his expertise and it’s on video, which you can watch right here.

The Duke and Duchess of Cambridge are currently on a tour of Ireland. During the past week, William and Kate took in the culture and saw the sights, as well as meeting with leaders. However, it wasn’t until the end of last week when they were actually able to find time to meet with the locals.

One appearance in which they got to do a meet-and-greet was at the Galway Community Circus. While chatting with performers, William and Kate shared some interesting details, including Princess Charlotte’s new activity, a top-secret date night and a secret talent caught on video.

During the conversation, Kate mentioned that her daughter, Princess Charlotte, is taking gymnastic lessons. Being a passionate advocate of children and education, the Duchess of Cambridge talked about how the activity helps kids with their basic skills of balance and coordination. But that would not be the biggest surprise.

Being in the spotlight, it can be next to impossible to have some private time. However, Prince William and Kate Middleton managed to do just that. The royal couple ended up sharing that they recently attended Cirque du Soleil and gushed about the performances. Somehow, the media missed this, which is surprising since it was a very public event. It must have been a treat to enjoy a date night without the paparazzi trailing behind them.

William would reveal yet another surprise, though. It turns out he has a secret talent and it just happens to be jugging! He demonstrated his unexpected gift, which was filmed and posted on Twitter. We have to say, he is pretty remarkable at it and Kate was looking on, all smiles at her man’s multiple talents.

What do you think of Prince William and Kate Middleton being able to sneak off for a top-secret date without the media knowing? How do you think they managed that feat? What are your thoughts on the Duke of Cambridge’s juggling act? He definitely looks talented, if we say so ourselves!

Be sure to catch up on everything happening with the Duke and Duchess of Cambridge right now. Come back here often for Prince William and Kate Middleton news!