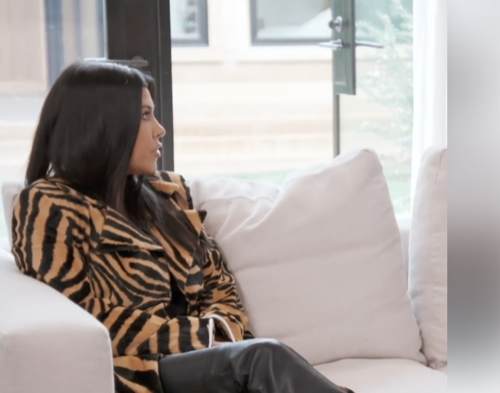 Tonight E!’s most-watched series Keeping Up With The Kardashians (KUWTK) returns with an all-new Sunday, April 30, 2020, season 18 episode 6 and we have your KUWTK recap below.  On tonight’s KUWTK season 18 episode 6 season called, “Kim reveals she no longer wants to host the annual Christmas Eve Party. The family feuds over holiday plans. Scott struggles to talk about his parents when reunited with a relative from his past.”

Kris and Khloe are waiting at lunch for Kim. Kris is stressed, her assistant is on vacation and its the holidays. Khloe offers to be her assistant. Kim shows up. They tell her that Khloe has a new job. Kim pretends to interview her for the job.

Kim talks to her sisters about switching Christmas Eve back to Kris’. Khloe gets upset just thinking they may not have one this year if Kris doesn’t want to take it back over.

Kim is at Scott’s. The kids have been asking about Scott’s childhood. It makes him think about his parents and it makes him sad. Kim and Scott look at old photos. He talks about his Uncle Dave. He doesn’t seem him much. He is the best friend of Scott’s father. Scott calls him to invite him to visit. Kim thinks it is important the kids see Scott’s uncle.

Kourtney is hosting a movie event at her home. Billy Porter is there. They will be watching Like A Boss. At the event, Kim tells Kris she can’t throw the Christmas Eve party. Kris isn’t happy. She also can’t take it back. She is tired and it is a lot.

Khloe arrives to work for her mom. After doing some administrative stuff, Khloe is feeling good about these situations until Kris gets pushy and calls her name over and over. Ron from E1 comes to see Kris. She gets mad that Khloe just let him walk by. They go over Kylie’s schedule. Kris gets even more annoyed when Khloe stays on the phone for too long.

Scott’s uncle arrives. They all sit and talk about Scott when he was younger. Scott seems uncomfortable. Khloe wishes Scott would face his feelings.

The next day, Khloe asks Kris how she did as her assistant. Kris says great but Khloe knows she is lying. Kris explains that they needed to be more business and less chatty. Khloe tells her she is top of the line assistant material. Kris just can’t separate Khloe being her daughter and her assistant.

All the girls get together with an event planner. Kourtney is hosting Christmas Eve. Kylie refuses to leave her house on Christmas morning. She suggests a brunch. They all go back and forth on what they want to do.

Scott, his uncle, and the kids look at old photos. They talk about old times. Scott thinks that when his parents passed it was too hard tot all about. Looking back at photos, he feels happier thane thought he would. The thinks the more he shares with his kids the more they will connect with them. Being with his uncle, it was nice because he remembers so much of Scott’s childhood.

Kris, Kourtney, and Khloe sit and talk. They have decided to stay at their own homes in the morning on Christmas and then head to Kourtney’s. They talk about having hot cocoa. Kourtney has a particular way she wants to make it. Kris and Khloe get annoyed. Khloe argues with her while Kris tries to contain her aggravation. The event planner shows up so they can talk about Christmas Eve.

After all of the planning, the party was cozy and intimate. Everyone was happy. It turned out great. After the party, Kourtney stayed up late to make the morning special for the whole family. Kris thought it was perfect.

They all meet and eat later and talk about how great it all was. They all tell Kourtney how great she did.