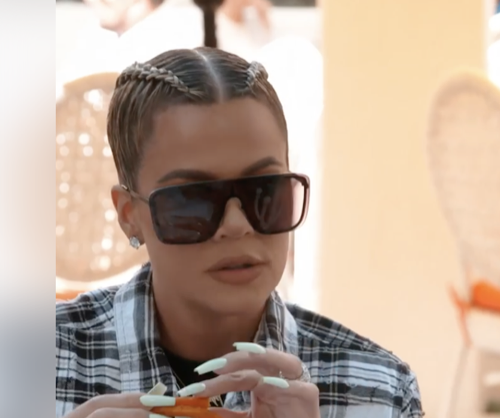 Tonight E!’s most-watched series Keeping Up With The Kardashians (KUWTK) returns with an all-new Thursday, October 15, 2020, season 19 episode 5 and we have your KUWTK recap below.  On tonight’s KUWTK season 19 episode 5 called, “Sister, Sister, and A Babymoon,” as per the E! synopsis, “Khloe takes her bestie on one last trip before her due date, but worries that some issues with Malika’s baby daddy might send her friend into early labor. The family deals with the fallout of Kendall and Kylie’s big fight in Palm Springs. Corey and Kris take a dance class in an attempt to get their mind off the family drama.”

The fight between Kendall and Kylie went from zero to a hundred in less than a minute. The two fought about Kendall getting dropped off of all things. She hadn’t gone into the drag show because she was tired and so she had stayed in the car where she fell asleep until Kylie came. Kylie was heading back to LA. Corey was with her and he was also heading in that direction Kendall was heading back to LA as well. It was a simple situation with all three heading in the same general direction and it turned into a fight because Kendall wondered out loud when she would be dropped off.

Kendall thought she would be dropped off before Kylie. Kylie said she wasn’t going to do that because she didn’t want to drive through the city to drop her off when she was to head home first and so that’s when Corey tried to play peacemaker. He suggested getting another car just for Kendall. This way she didn’t have to go all the way to Kendall and be dropped off last. Only Kendall thought it was perfectly reasonable that she get dropped off from the car she was in. She also didn’t like Corey butting in because then they got into an argument and it was made worse by Kylie joining the argument.

Kendall and Kylie became physical with each other. It’s unclear who started it first or who said what, but there were accusations aplenty and the night ended when Kendall getting dropped off at a gas station. She had needed her mother’s car to come to pick her up. Kendall wasn’t drinking that night and she was dead sober. She claims that Corey was cursing at her. She also claims that Kylie put her own heel into her neck. Kendall was saying a lot. She was saying it without the other side getting their chance. They didn’t get their chance to say what happened until the next morning and by then Kylie was claiming Kendall was blowing things out of proportion.

The sisters had gone to Palm Springs because their mother had wanted to bring them closer. She had been concerned about a different physical altercation between her daughters and so for the trip to end in another fight had upset her. Kris wanted all of her children to get along. She tried to be a peacemaker and it just wasn’t working this time because neither Kylie nor Kendall wanted to talk to each other. The other sisters were forced to take sides. They didn’t want to and they ended up having to. There were some that empathized with Kendall because they know she suffers from her anxiety and they didn’t want this scenario to add to her troubles.

Kendall also felt like she had no one on her side in the first few days no one called her. Her sisters were trying to be impartial at the time and so they felt they had to be there for her. The fight was also between three people. It was two people against one. Which many of them thought was unfair. They especially felt for their mom to be stuck in the middle of it and they were talking about when the coronavirus came up in the conversation. The sisters all have young children. They were being told that preschool had classes with half of the students and they were also hearing how they needed to keep their kids at home.

Now, was the time to take precautions. Khloe sort of ignored these precautions because she was acting as emotional support to her best friend Malika and that included taking Malika on a babymoon. This was something that typical the baby’s father would do. It just that he’s not with Malika anymore and so Khloe stepped up. Khloe has been stepping up a lot in fact. She put together a baby shower for her best friend and now she’s taking her on a babymoon. She didn’t want her friend to feel at any time alone. And so she was being a great friend but a casino trip really wise with Covid-19 happening everywhere.

Khloe and Malika were in a somewhat large group for covid times. They also left the hotel room to go party because Malika wanted to live it up in the few months she had before she gave birth and so she was enjoying herself when a stranger reached out to her about her baby daddy. He was in another woman’s DMS and this person thought Malika should know. She replied, “not her man, not her business”. It didn’t matter what OT was doing. He was just a baby daddy and Malika really shouldn’t have replied. She was being emotional when she wrote that. She also really wanted to get back to her party and so she did.

Malika may not have planned to be single when she gave birth only she has a great support system and she’s going to be okay. She has a sister and her friends were there for her. They partied and meanwhile, back in LA, Corey tried to reach out to Kendall. He wanted to clear the air with her and go to a basketball game and Kendall turned him down. She said he was the adult in the car during the fight with her sister. She also told him he shouldn’t have cussed her out and he said that didn’t happen. He claimed the fight was just between Kendall and Kylie. He said it was them that was going at it and so he didn’t understand what Kendall was saying about him taking a side.

Corey said he didn’t take a side. He tried to be fair and he returned that it was Kendall who didn’t understand how rude she can be. Corey didn’t mean to get into another argument. He literally just called her to invite her to a basketball game, but it turned into another fight and this happened as Corey was trying to move on from the previous fight with Kris. Kris had wanted to put the whole incident behind them. She even convinced Corey to take dancing lessons with her. They were doing their best to put this fight behind them while learning ballroom when a second fight came up. Albeit just over the phone this time.

Kris was still trying to figure out what to do when Covid-19 was officially declared a pandemic by WHO. She came to regret her dance lessons for sure and Khloe regretted her trip as well when she came back with a running nose. Khloe began wearing a mask even when she was indoors. She also visited Kendall to check up on her and she learned Kendall and Kylie still aren’t speaking. They’re sticking to their stances that the other sister was in the wrong.

And so nothing good can come out of such stubbornness.