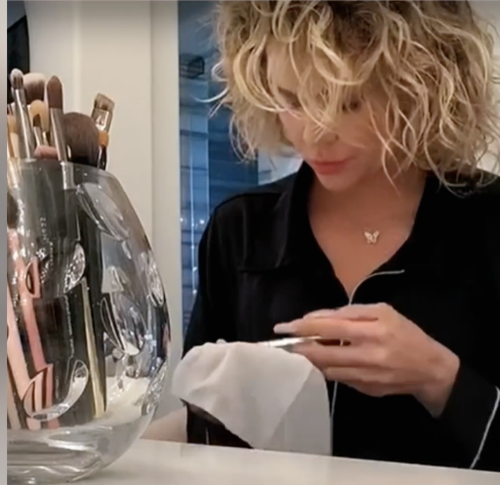 Tonight E!’s most-watched series Keeping Up With The Kardashians (KUWTK) returns with an all-new Thursday, November 5, 2020, season 19 episode 7 and we have your KUWTK recap below.  On tonight’s KUWTK season 19 episode 7 called, “Losing It In Lockdown,” as per the E! synopsis, “Kim struggles to balance work life and mum life in quarantine, while Khloe gets creative to keep herself entertained. The family encourages Kendall and Kylie to reconcile after their argument in Palm Springs.”

Khloe was sick. She has been staying in her room for about fourteen days because she hasn’t been feeling well. She was doing her best to quarantine because she did have Covid-19 and she wanted to keep the rest of her family safe. She truly didn’t want her young daughter to catch the disease. It was already taking a toll on Khloe’s health and she didn’t want her daughter to experience the same thing. Khloe was also physically distancing from the rest of her family. She’s been keeping in touch with them video video-chats and phone calls. She was on a group chat with her family one day when the conversation came back to Kylie and Kendall.

Khloe’s two sisters still weren’t talking to each other. Kendall and Kylie got into this huge fight on their way home from Palm Springs. They got physical with each other. They called each other horrible names and neither wanted to be the first to contact the other afterward. The sisters weren’t talking. They weren’t even on the same group chat like everyone else and so the rest of the family wants them to make up. They needed Kendall and Kylie to put this fight behind them because otherwise, it’s just weird with leaving one person at all times in order not to offend the other. Kendall and Kylie also shouldn’t be fighting while the rest of the world was falling apart.

Covid-19 has affected the whole world. It was a global pandemic and most of the family was just doing its best to deal with it. Kim was spending more time than ever with her children. She has four children and she usually gets a break from them when she’s working, but because she’s not working thanks to the pandemic, she’s been home and she’s been parenting alone seeing as her husband tested positive. Kanye was also quarantining in a room because he was sick. He couldn’t come out and be there for his kids. He had to focus on himself first. Kanye waited to get better and in the meantime, it was Kim who was educating the kids.

The traditional school was closed. The kids were being educated from home and they had so much energy. They couldn’t work it off by playing with friends or cousins. They just had each other and mom. Kim was being driven out of her mind with kids. She tried to be there for everyone and she was finding it possible with four kids. She eventually had to threaten to cut herself in four when the children began fighting over her attention. The threat made Saint sad because he thought his mom was going to bleed out and die and Kim confirmed that when she said she was going to die if she didn’t get a minute to herself.

Kim was able to turn to her mom while she was in need. Kris lived across the street and, after a fourteen-day quarantine for them both, they were able to finally see each other in person. Kim needed her mom because she needed help juggling kids. She knew her mom raised six and so she asked Kris for advice. Kris told her not to say she was going to die to the kids. She also assured Kim that she would get a handle on it. Kris believed in Kim and so now Kim just has to believe in herself. Kim was still trying to work. She was a surprise guest during a call when she saw one of her children around the swimming pool and she had to run out to catch her child.

Kim really needed a partner to help her out around the house. Unlike Khloe, she did not have a Tristan. Tristan was a serial cheat and he treated Khloe awfully when they were together. But he’s a good dad. He stepped up when Khloe needed him and he’s been taking care of their daughter while she’s been in quarantine. Tristan was even helping Khloe. He would put food together and items he thought she would like on a tray and he would deliver it to Khloe’s door. Khloe was so grateful to have Tristan during this time. They weren’t back together or anything. They were just co-parenting and it was nice. Khloe liked having Tristan at the house.

Khloe also reached out to her mother. She had found out Kendall and Kylie publicly admitted they weren’t speaking to each other and she found that concerning. The family doesn’t air their grievances like that unless it’s on their show. Other than that, they tend to remain untied front. Khloe thought Kris needed step in now because only her mom could fix the situation and so Kris agreed to do what she could. She reached out to Kylie first. She talked to Kylie about mending fences with her sister Kendall and she met with some resistance. Both Kendall and Kylie have a stubborn streak.

They get this streak from a certain parent. Everyone in the family knew about it and they still hoped Kris would bring the sisters together again. Kris tried to do just that. She talked to her daughters and they continued to play games. Kendall even called Kylie and Kylie ignored the call. She put it straight to voicemail. So, Kendall was hoping that Kylie would call her back. She waited around and it didn’t seem like Kylie wanted to call her back or mend things with her sister. Kendall was figuring out what to do when she reached out to her other sisters. Khloe was doing better because she finally tested negative and she was able to leave her room.

Kim was also doing better. Her husband tested negative and he was finally able to give her a break from the kids. Kanye took the kids to their ranch in Wyoming. With him and the kids gone, Kim had the house to herself and so she was catching up with Kendall when Kendall had to end their conversation early because Kylie got around to calling her back. Kylie was willing to admit that the night in question did get wild. Neither of them meant for that to happen and they still love each other. They both apologized in a roundabout way and they were ready to move on. Kendall and Kylie made up.

Khloe was reunited with her daughter.

And Kim ended up missing the kids because she was bored without them.