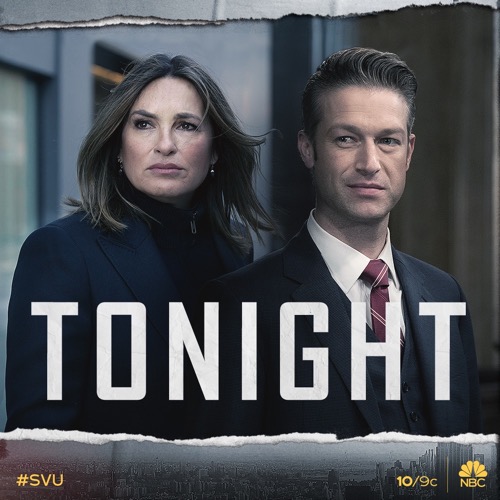 Tonight on NBC Law & Order SVU returns with an all-new Thursday, January 16, 2020 episode and we have your Law & Order SVU recap below.  On tonight’s Law & Order SVU season 21 episode 11 as per the NBC synopsis, “An actress accuses a high-powered media mogul of attempted rape. Benson finds herself in a high-stakes game of cat and mouse. Meanwhile, changes in the squad room put Carisi between a rock and a hard place.”

Monica Russo was a stripper. She was working one night when a client got ruff with her and raped her. Monica tried reporting it to the cops. She tried reporting it to her boss and nothing happened. Her claims were pushed to the side if not outright ignored. Monica did everything right. She reported it when it happened and still no one believed her or even tried to help her. Therefore, Monica snapped. Monica posted what happened to her on billboards and messages all around the city.

Monica forced people to hear her story. It was the only way to get it out there and eventually Benson saw it. Benson saw it when she was with her son. It was an awkward conversation she had had to have with him, but first, she had to investigate the rape. She and her squad followed up on the claims. They spoke to all the strip clubs until they found the right one and they even found the police officer that failed to do due diligence. The officer should have handed the case over to SVU. He instead chose to throw away because he said the victim wasn’t believable.

The officer also buried this case because the owner of the strip club was a former cop. It was a conspiracy to bury what happened to Monica and, by time SVU found her, Monica was a little too jaded to trust them. She had trusted before when they let her down. She didn’t want to give them that same opportunity. Monica had quit her job at the strip club and she now works at an S&M experience room. She said she likes it there because there are clear rules. The men that violated those rules were kicked out and never allowed back.

Monica also took a photo of the officers that found her. She didn’t think they would investigate her case and so she wanted their photos for her next billboard. The detectives at SVU understood why Monica would be guarded. It didn’t stop them from investigating and they eventually learned the name of her assailant. Her attacker was Markeevious Ryan. He was a retired athlete who now owns restaurants and was still wealthy and influential. He was also a regular at the strip club. He was still showing up there and so that’s why the owner tried to bury the rape.

Monica later confirmed their theory that it was Markeevious. She said she took him to the VIP room and that within seconds he was taking off his pants. She had tried to laugh it off. She tried to tell him that he had the wrong idea and he instead pushed ahead anyway. He raped her in the VIP room because he figured he could get away with it. He even left her a two hundred dollar tip that she took because she was in shock. Monica calls what happened to rape. He, on the other hand, said it was consensual and that he was merely frequenting a prostitute.

The cops spoke to Markeevious at length. He called Monica a whore and he said he paid for the whole experience. It even seems like he tipped the club owner for the rape. Markeevious didn’t see what happened as a big deal and he was quick to move on when the cops questioned him. Only they also questioned his soon to be ex-wife. She told the cops that there had been a string of accusations. She didn’t name names or anything because she said all the money should come to her and she told the cops that she wasn’t going to pay towards women that were too dumb to get from out from underneath him.

The ex-wife seems to know about the rapes. She just didn’t care because she didn’t want it to ruin her alimony and so the cops weren’t going to get the names from other women from him. No sooner did they hear from the ex-wife that Monica contacted them. Monica’s old boss at the strip club had sent her some of her old things all broken up and there had even been a dead rat included. The club had wanted her to shut up about her rape and all that did was infuriate her. Monica fired SVU. She then went and chained herself out of Markeevious’s restaurant as a protest.

Monica told everyone that saw her that Markeevious raped her. He then called the cops on her and so she was arrested for vandalism. Benson had felt so bad for her that she found a lawyer for Monica. She thought the lawyer would help and oddly enough all the lawyer did was tell Monica had to peacefully get her message out there. They held a press conference. They told everyone that Markeevious raped Monica and they asked other victims to come forward. It turns out Markeevious was suing Monica for defamation and so that incited them to do a press conference. And so its own fault that the conference worked so well.

Two other women contacted Monica’s lawyer. They had been raped out of state and they were willing to come in to tell their story. Which would go toward proving a pattern? The women all told a variation of the same story. They mentioned how Markeevious was overly forward and how out of nowhere his face would go blank right before he attacked them, but neither woman had filed a police report at the time of the rape and so a judge wasn’t willing to include them in the case. The case against Markeevious was shaky at best and Carisi didn’t know how to properly defend Monica.

He tried to take the rape to trial. He tried to defend Monica and each and every time there was Markeevious’s lawyer ready to tear it all down. This lawyer made the previous victims seem like schemers. She accused Monica of faking the rape to get attention for her art. She also made Monica looked unhinged in court and so Carisi had his worst day ever. He came to doubt his own ability as a prosecutor because he didn’t think he would win against Markeevious. He was almost ready to give up when he talked to Benson and Benson showed how to go forward. Carisi later questioned Monica on the stand.

He had her imply that Markeevious was a coward not to go on the stand. She implied a bunch of things and eventually, it got to Markeevious. He told his lawyer that he wanted to testify. He was then put on the stand where Carisi grilled him and later pushed Markeevious into admitting that he was being sued by several women accusing him of rape. And so that was it. That was the moment that convinced the jury and they found him guilty of rape.

Monica later did another mural and this time it showed her finally receiving justice. She even drew images of Benson and Carisi having wings and being angels.