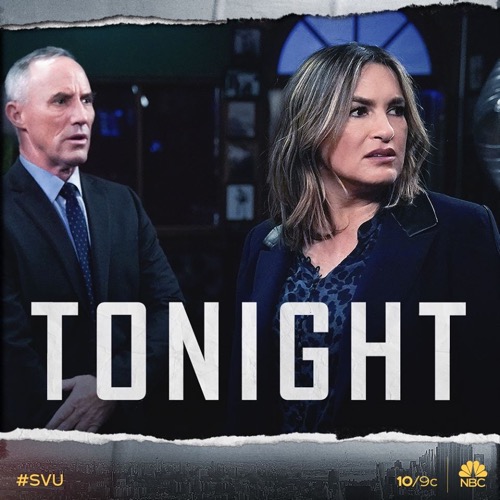 Tonight on NBC Law & Order SVU returns with an all-new Thursday, January 30, 2020 episode and we have your Law & Order SVU recap below.  On tonight’s Law & Order SVU season 21 episode 12 as per the NBC synopsis, “Benson investigates a police officer’s accusations of sexual assault. Captain Tucker’s retirement party ends in tragedy.”

Ed Tucker is retiring. The IAB detective has had a long career and he was looking forward to the next stage of his life. He even had one last party to say goodbye. His friends from all over came and so did Benson. Benson and Ed used to date. She was the one that ended things and yet they ended it as friends and so she went to his party and so did the rest of her squad. They all went there to support her. Benson was glad to have them and it helped to have friends around when she learned that Ed has gotten married.

The marriage is still fairly new. They eloped as a whim and they seemed to be happy. Ed introduced his new wife to Benson and the new Mrs. Tucker had apparently heard all about Benson. Ed it seems had talked about her. He only mentioned good things and so Benson had nothing to worry about. She was talking to Ed and his wife when someone crashed the party. This party crasher was Rachel Wilson. She was a former NYPD detective and she had gone to the academy with Benson. They knew each other.

Only Wilson wasn’t there to catch up. She came to the party because she had some final words for Ed and his former partner. She told them how they let her down and she said she had been a good cop. She also threw her drink at Ed as a final goodbye before storming off. Ed claimed not to know why she did that and everyone at the party was trying to put the whole thing behind them when they heard the gun off. It turns Wilson killed herself in her car. She shot herself in the chest and she did it after making a video.

Wilson made a video. In it, she confessed to being rape and she said that the boy club had covered it up. Wilson had tried to get justice. She reported it to a superior and she even turned towards Internal Affairs. She claims that they all chose to bury what happened to her in order to protect her rapist. Her rapist was someone in a position of power over her and so SVU investigated it. They reached out to anyone she was close to because they needed to know the name of the man that assaulted her. And they found her priest.

Wilson was raped. She tried to get help and no one would listen to her. She then fell into a depression where she drank to make herself feel better. Wilson was found by her priest who gave her a place to stay and he thought she was doing better. Then went and killed herself. Wilson chose that path because she thought that was the only one open to her and so SVU had to investigate it because they had to see if cops covered up what happened. And luckily for them, they had an in with someone that worked with Wilson.

Wilson was in vice. She used to work with a guy named Ralphie Morris who Tamin knew and so Tami and Benson went to go see him. They asked him about Wilson. He told them that she got around a lot and that her word couldn’t be trusted. He also asked that they not include his name in their case. Ralphie didn’t want it to get around that he was talking to SVU and unfortunately that once conversation must have back some sad reminders because he later killed. Ralphie killed himself, but before he did he pointed them towards Gary Wald.

Gary used to be Ed’s partner before he transferred out. The detectives brought in Ed to ask him about it and he told them that he did investigate the rape claim. He said it was unverifiable. There was no evidence backing it up and that Wilson could have brought down three marriages if she kept going. It seems she really did get around or that’s what is claimed by the men that worked with her. Even Ralphie was believed to have slept with her. Ed said he had to drop the case because there was nothing there and yet Benson knew he was lying to her.

She just didn’t know what about it. Benson also had to investigate Gary Wald and she thought maybe Ralphie could help from beyond the grave. The man had been on the phone with his shrink before he did. He could have told the doctor something and so they tried to get the doctor to talk to them, but he refused. He said doctor/patient confidentiality was still in play and so the detectives tried taking the shrink to court. They couldn’t get anywhere there either. The shrink’s files were to remain seal and so later that day someone broke into the doctor’s office.

The doctor believes it was Gary Wald. He said the other man called him to ask about Ralphie and that he refused to tell him what his patient confessed, but the doctor also said that Ed Tucker knew everything that he did and so Benson went back to Ed. She asked him what he was hiding and he told him that he was dying. He has brain cancer. He’s been hiding it from everyone and that’s why he didn’t remember Rachel Wilson. He also said that he never covered up anything. He agreed to wear a wire and he talked to his old buddy Gary.

He got Gary confessing to rape on tape and Carisi was later warned that he couldn’t rely on Ed’s testimony to help with his case. He had to rely on the tape alone.

No sooner did Carisi bring Gary to the court that Ed Tucker killed himself.

Ed wrote in his suicide note that he didn’t want his wife wasting good years taking care of him.