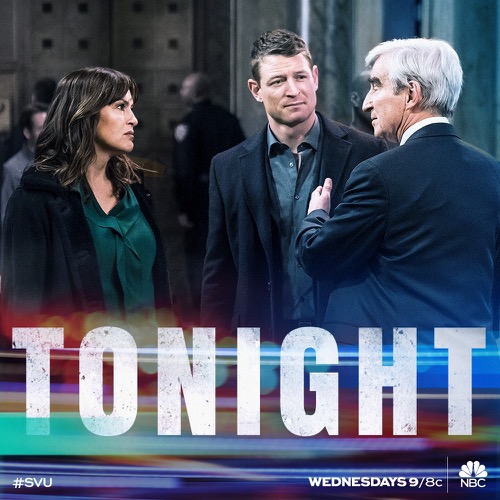 Tonight on NBC Law & Order SVU returns with an all-new Thursday, February 27, 2020 episode and we have your Law & Order SVU recap below.  On tonight’s Law & Order SVU season 21 episode 16 as per the NBC synopsis, “Rollins’ sister stirs up trouble and a possible SVU investigation when she reports a doctor who trades prescription painkillers for sex.”

Amanda goes for a run before going to the doctor’s. She has been running on her bad knee and has to have it drained. During her appointment she misses a call from a young woman who failed a drug test. She tells Amanda she needs advice. The young woman then asks a woman to watch her child when she runs to the bathroom. She does drugs inside and overdoses.

Amanda gets a call and heads to the hospital. The young woman is her little sister Kim who she hasn’t seen in 3 years. She tells her how she is probably going to jail and needs legal help. Maybe Amanda can get her a deal.

Amanda goes to tell Liv. She tells her how Kim says her doctor has been extorting her for sex oxy. Fin and Liv meet with Kim who is surprised Amanda isn’t there. She tells them how she was given samples by her doctor before he has her for sex in exchange.

Amanda pretends to be interested in oxy, visiting the doctor her sister went to. He is exactly as Kim detailed, offering Amanda the meds for sex. Fin and Cat rush in just as he tries to undo his pants.

At the precinct, Liv’s boss wants to see how many other doctors they can round up. Meanwhile, Cat meets up with a drug rep who says she is more into people and parties with prescribers. The more they make the doctors happy, the more they make.

Amanda’s sister calls their father who arrives in town to see them both. Amanda is cold and distant from him.

Amanda lets her dad stay with her and Kim for one night. The next day she tells Fin about it. He tells her to be careful. Kim shows up. Fin warns her this is the last chance she is going to get.

Liv attends a drug conference. She sees Cat come in with her new friend. Liv poses as someone in the prescription drug field while Cat is brought upstairs to spend time with a few doctors.

Amanda goes to court to get temporary custody of her nephew.

Upstairs at the convention, Fin and a partner bust into a hotel room to arrest a doctor, Cat and her friend, Tiffany. Meanwhile, Amanda comes home with the kids to find her father overdosing in her living room.

Liv and Carisi get more information about a doctor that the Chief knows. She believes the doctor is innocent but if they want to go undercut at the convention she has their back.

At the hospital, Amanda is having a hard time dealing with Kim and her father who is in denial.

At the convention, Liv speaks with one of the doctors, trying to get to her target Ray when the chief arrives and tells Ray that the NYPD is here, undercover. Cat and Liv are shocked.

Trey offers the chief a position as his new house council while they talk. The next day, the chief plays her recording to Fin and Liv. She had to do it, find out for herself. They head to court where she is a witness.

At the hospital, Kim and Amanda learn their dad got out of his bed and left. Later, Kim skips her deal and goes to prison to get clean. Amanda’s mom will move close to her to raise Kim’s son.