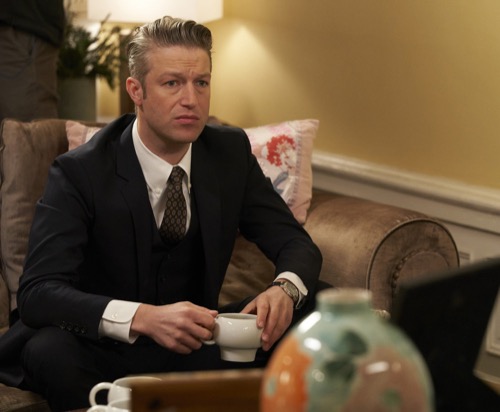 Tonight on NBC Law & Order SVU returns with an all-new Thursday, April 2, 2020 episode and we have your Law & Order SVU recap below.  On tonight’s Law & Order SVU season 21 episode 18 “Garland’s Baptism by Fire,” as per the NBC synopsis, “Chief Garland must put friendship aside when a pastor at his church is arrested.”

Olivia is at a party the chief has invited her to when she is introduced to a gentleman. He makes her blush. Meanwhile, Amanda and Carisi go to visit a suspect who is in trouble for embezzling from her church. In exchange for a leaner sentence, she gives up a sexual predator who is an official at her church. It is a Reverend who is at the same party as Olivia. Carisi and Amanda head there.

The next morning, Olivia arrives to meet the team. The chief stops to talk to her. This whole situation is very difficult as he is friends with the Reverend and doesn’t believe it. They have already started investigating the Reverend. They’ve been going to the church‘s books and noticed some strange checks that were paid out to young girls. They head to the church and ask the Reverend’s wife. She explains everything to them but is surprised to see some of the checks written out in large sums.

They start to question some of the young girls about the money they received. Most of the girls have great stories about the Reverend being generous well one share that he was expecting something.

Olivia goes to speak with the Reverend about all the payments and the checks. He defends himself that these were families in need and the church was honored to help.

Olivia and Tutuola head to take the Reverend in. His wife goes to the chief. She is extremely angry. Her husband didn’t do this and they have been friends with the chief forever. She knows this is all a lie. He tells her there’s video. She tells him it is fake. She threatens the chief that she and the rest of the church will never speak to him again before she takes off.

The gentleman who made Olivia blush at the Chiefs part of the other day arrives at the precinct. He is a criminal attorney and representing the Reverend. She brings him into the room with the Reverand and Tutuola so they can speak about the case. The Reverend tells them that the teen girl accusing him of rape has always had a fixation problem with him.

The teen girl who shared she was abused arrives home to her dorm to find graffiti all over her walls about how she is a liar. She takes off and has no plans to return to school. The team tries to find her. They discover she’s hiding out at her boyfriend’s apartment. They pay her a visit but she doesn’t want to talk anymore, she’s been painted to look bad and she didn’t lie.

The Reverend appears in court. He gets out on bail and speaks to the public, his supporters from the church steps with his wife by his side. During his speech, he bashes the chief publicly as the chief listens on. His wife seems extremely doubtful of her husband for the first time.

The next day, the Reverand’s wife pays Olivia a visit. She cries to Olivia, she had no idea and believed that her husband who is truly tutoring those young girls. She tells Olivia that she reached out to the girls that her husband it’s been a lot of time with and asked for forgiveness, she believes them and she hopes that they will come forward to tell Olivia the truth.

In court, several ladies take the stand in front of a grand jury to describe what the Reverend did to them and all the secrets he made them keep.

Carisi tells the Reverend and his lawyer about the girls and the fact that his wife is the one who got them all to testify. He is beside himself. Later, his attorney pays Olivia a visit to tell her that the Reverand and took a deal. He really had no idea that the Reverend was a predator, he was fooled. Olivia consoles him.

The chief visits the Reverend in jail. The Reverend is delusional and tells him that this is the Lord testing him. He put him behind these bars so that he could take care of all the men that live in jail. As he leaves, the chief cries.