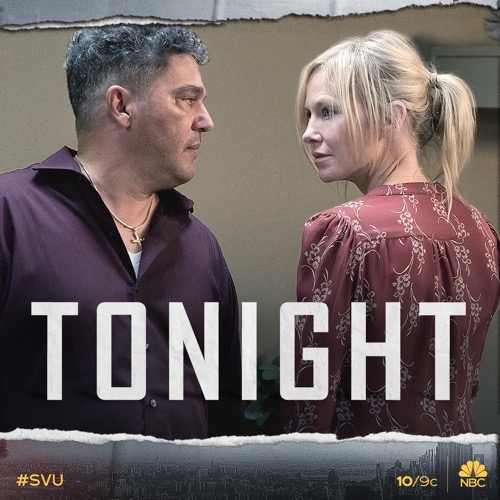 Tonight on NBC Law & Order SVU returns with an all-new Thursday, January 9, 2020 episode and we have your Law & Order SVU recap below.  On tonight’s Law & Order SVU season 21 episode 10 as per the NBC synopsis, “A desperate father takes matters into his own hands in the case against his daughter’s rapist.”

Detective Amanda Rollins was seeing her therapist when an irate father broke in. Frank Bucci broke in because his ex-wife took their underage daughters to a party being held by a pedophile and he had had enough. He wanted the Special Victims Unit to arrest the pedophile. He took Rollins and the therapist hostage and then he had Rollins call up her boss. She called Benson and she told her Bucci’s demands. He demanded that they arrest billionaire Steve Getz. He demanded the safe return of his daughters and he told Benson that he’ll hand over one of hers the moment he gets his daughters back.

Bucci then destroyed the cell phones so they couldn’t be traced. It also didn’t help that Rollins has been keeping her therapy sessions secret and so no one knew where she was being held or that there was a second hostage. Rollin’s squad didn’t know anything until the therapist sent out a message. Dr. Hanover’s son had come early and Bucci didn’t want to let him into the building. He had Hanover tell her son to get lost, but she managed to hide a coded message. She told him to go to his father’s and that he got to Leo’s. She told Bucci Leo was her ex-husband and instead, he was a supervisor.

Daniel, therefore, notified the supervisor that something was wrong with his mom. This message was passed on through the system and it eventually landed on SVU’s desk. They figured out Rollins was still seeing Dr. Hanover. They went to the doctor’s office and unfortunately, both Rollins and Bucci was gone. Bucci was in panic mode. He talked his actions out with the detective and he realized that SVU would find them because faster than he wanted them to. So, he took Rollins. He left behind the good doctor and so she told them that Bucci had taken Rollins. They could have gone anywhere and there no was on tracking Bucci because he knew their tactics.

Bucci was former NYPD. He still has a bunch of guns and he wasn’t well. He was taking pills and drinking the last time Dr. Hanover saw him. Another thing he revealed is that he wanted to see everything happen on tv. It wasn’t much to go off of and so the detectives tried the next best thing. They went to Bucci’s ex-wife. Donna Bucci came out of rehab because Steve Getz’s people called her up and asked her to supervise her daughters at a party. She had no idea that Getz was accused of raping her own daughter. She didn’t find out until Benson told her and then she was so confused that she demanded she takes her daughter’s home.

Donna didn’t want anything to do with Bucci. He apparently cheated on her during their marriage and he even derailed her own modeling career. Its why she so quickly believed the story that he was trying to interfere with their daughter Ivy’s career. She thought he was just a jealous old man and so the rape angle put things in perspective. Donna left with her daughters, but Tamin had gotten the chance to talk to Ivy and Ivy revealed why she went to the party. She said she went because Getz was too powerful. He was even friends with the judge that called her a whore in court and so Ivy didn’t think Getz would ever go to prison.

The detectives followed up on that lead. They found out Judge Joe Ellery had sex with a trafficked seventeen-year-old and that Getz had a video of it. He used it to blackmail the judge. Its why the judge offered him to time served and so ADA Carisi used that same footage against the judge. He wanted the judge to sign off on a warrant. He threatened to reveal the footage to the judge’s wife and to the detectives that will naturally side with the cop’s daughter that the judge basically spat on. He also had the judge wore a wire to a meeting with Getz’s lawyer. The judge and the lawyer were fraternity brothers and so that’s how the judge met the pedophile.

Judge Ellery later wore a wire as he spoke to Paul Abrams. Abrams probably revealed more than the judge would have liked because he said they were flying in a few fifteen-years-olds from Paris and he offered the judge said going, but the judge turned him down. He also got Abrams to admit that he had the real footage of the rapes at his office. He said attorney-client privilege protected him. It does not and so they used the warrant to find evidence of this child pornography. They then used it to get Abrams to flip on Getz.

Abrams got immunity as long as he could give them Getz. He then called for Getz for them and so they later arrested Getz fleeing the country with his pimp girlfriend. They were charged with sex-trafficking. A new charge that he wasn’t going to beat. They then released the info to the press and it was on the tv long enough for Bucci to see it. Bucci saw that the detectives followed through on his demands. He thought it was only fair to release Rollins and so Rollins arrested him. It was the only way she could be sure that he wouldn’t be killed on his way to the station.

Only Getz wasn’t done. He kept a little black book that his lawyer didn’t know about and he was willing to hand it over if he didn’t go to prison. He has information on several governors, an ADA, and a prince. He thought if Carisi didn’t make a deal that someone else was bound to do it, but it seems no one wanted to protect him and only then was his life over.

Thankfully, Bucci’s mental state was taken into account and so he only received a year.

As for Getz, he surprised everyone when he killed himself in prison.