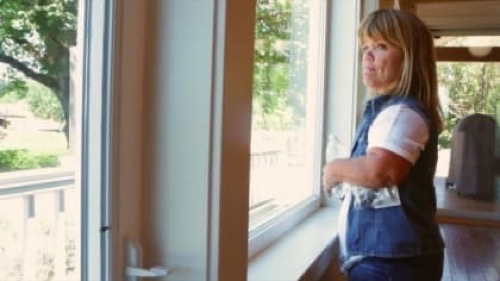 It’s a big exciting day for the Roloff family. Amy was moving on and she had given Matt permission to go in. Matt has been waiting to clean out the farmhouse. He’s been dying as he waited for Amy to finally leave and so Matt went in today with two crews. The crews were made up of people that had been tested and/or was already on the farm. There normally would have been a production there as well, but traditionally filming had to stop with the Covid-19 outbreak and so the family has been filming themselves ever since. The Roloff family filmed the moment Amy was officially done with the house. She was seen off to the side as Matt cleared everything out.

Zach and Tori even stopped by with the kids. Zach wanted to say goodbye to his childhood home and he showed his young son Jackson where his room used to be. Zach and the family were grateful they were on the farm because that’s allowed them to stretch their legs. Everyone else in the city had been cooped up in their homes. The city was now going through Phase 1 of reopening and that allowed more work to be done on the farm. Matt was bringing in equipment as well as people. Zach watched all of this and he realized he wanted to take a bigger role on the farm. He’s been thinking it over in quarantine.

There’s also been great personal news for the family. Jackson’s speech has gotten better. He’s able to fully communicate now and he loves talking. Jackson was doing well. Lilah was doing better. Zach felt now was the time to talk to his dad and he was just working up the courage because it’s not like he ever thought he would take over the farm one day. Zach like everyone else assumed the farm would be taken over by Jeremy. Jeremy is his twin brother. Jeremy was positioned to take over the farm because he always told everyone that he wanted it one day and now it’s unclear what he wants. Jeremy might still want the farm.

Zach would be positioning himself against his twin if he made for a play for it. At the same time, he was also there on the farm and he knows he can work with their dad. Their dad was a difficult person. He wanted to lead and it had to be done his way. Zach believes he can work with his dad because he said he’s fine being Robin to his dad’s Batman. He just doesn’t want his dad to be an evil Batman. Matt was thinking of tearing down the farmhouse to build his dream home and Caryn is like she loves their current. She does wish it had more entertaining space, but it’s their house. The farmhouse is still Amy’s.

Amy still owns it in spite of the move. Amy and Matt also disagree on what to do with the house now. They were still going back and forth over it. Zach did his best not to be in the middle. He hates it when his parents argue and he thought that was over with when he moved out. Zach never chose between his parents. He still supports his mom and he and his family took new family photos for her new house. It was a great surprise gift for her. Amy loved the photos and it was only after he did something for his mom that Zach worked up the courage to talk to his dad. He talked to his dad about how he wants to be involved in the long-term running of the farm.

The farmhouse was going to the farm manager in the meantime. Matt had agreed to it and everything else can be decided later one. Amy and Matt discussed it later when it was just them. They knew Zach’s desires and they also knew he’s been putting in the work. He hasn’t just repeated his interest. He’s been working on the farm every day and he’s been showing his parents that he was serious about taking it on one day. His parents discussed that. They also ended up going back to one of their earlier fights because Matt said that KT living at the farmhouse for a while meant they didn’t have to worry about it for a few months and so Amy naturally mentioned the pressure she felt to move every day.

Amy was angry that Matt pressured her into leaving. He was on her every day demanding when she was going to leave and, now that she’s left, she still can’t stop herself from mentioning. Matt didn’t give Amy the argument she wanted. He pretty much said what he had to say and he left. Amy stayed behind because she wanted to say goodbye to the house one final time. She walked through every room and she remembered all the good times she had there. She had a really hard time saying goodbye to the kitchen. The kitchen was her favorite room because she loved how spacious it was and she remembered all the family dinners she had there with her children.

Her children grew up in that house. Their childhood was there as they slowly renovated the home until it was just perfect and so Amy’s goodbye tonight was heartfelt.