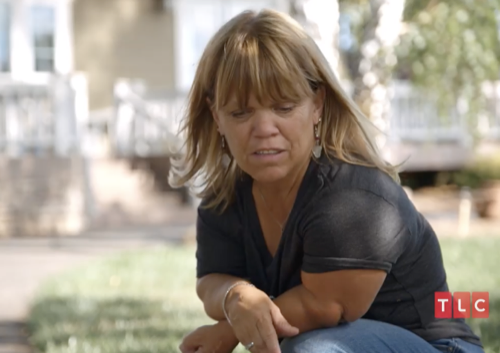 Jackson tries to sleep in his own bed for the first time. Amy is frustrated by house shopping while Chris takes another step toward popping the question to Amy.”

Amy is getting a little down with having to find a new home, she has lived in this home for over 30 children and raised her children. Chris is

Matt wants a fence put in to separate his side from Amy’s side of the property. He and Amy don’t talk a lot unless they have to. They are just trying to be cordial with each other until she leaves the farm. Matt got a couple of quotes for the fence, he tells Amy about them. He hands her some papers and tells her he likes the three rail, she agrees. Matt tells her good fences to make good neighbors. She tells him that she has been outbid three times house hunting. She knows she has to move on, she doesn’t have a place there anymore. Matt tells her not to think about buying her forever, just a place for now. Amy says she doesn’t want anything temporary. She doesn’t have a house yet, and even though she doesn’t know what the future holds for her Chris, a temporary solution is not for her.

Zachary and Tori are in the car with Jackson, they are going to go buy a big boy bed for Jackson. The two think Jackson is doing very well adjusting to the fact that he is going to be a big brother. They are looking for a bed as low as possible to the floor and something that is safe. The bed store gave them some good ideas but they haven’t found the one they want yet.

Chris and Amy are going to be celebrating their third anniversary, there are so many things he likes about her and makes their relationship strong. There is just a connection that happens when you meet the right person, and Chris thinks it is time to pop the question. Chris has never been married before, this is a big step for him. He has already picked out the diamond, now he has to get it set into a ring. He didn’t marry before because he didn’t feel he met the right one, but Amy is that person. Amy likes to look for heart-shaped rocks on the beach, so he got her a heart-shaped diamond. Chris is very nervous, this is new territory for him.

Amy is out to lunch with Lisa and Deb, she talks about moving and knows that when she does, she will have to make an effort to visit the kids because they are so used to the farm and Matt will still be living there. She admits that this is the hardest part. Amy goes on to say that she does think a little bit about what would Chris think of a new place that she would choose.

Tori is four months pregnant and she is getting her ultrasound with Zachary and Jackson. Today, they are measuring the baby’s growth. The baby weighs 1 pound 9 ounces, everything looked normal on the ultrasound, but her head is larger and her long bones are about two weeks behind. She is most likely going to be an LP. They are in a little bit of a shock, but they knew it was going to be a 50/50 chance. It’s hard for Tori to hear that her daughter is going to be an LP because there is more of a chance of her having medical issues. Tori says she is opting for a c-section, it sucks and hurts but she thinks she has no choice because an LP’s head is bigger and sometimes has a harder time passing the birth canal.

Tori is fine, but she thinks it is a bit scary this time around. Zachary tells her to say how she feels. She says she thinks it is just in general, raising a girl and her being an LP makes it even more complicated. She feels like she lucked out with Jackson, and she knows other people are dealing with more problems, sometimes she feels guilty. Zachary tells her not to beat herself up, it is normal for her to feel how she does. Tori says she just worries all the time, Zachary tells her that all parents and they are no different. They just can’t let LP consume them.

Amy is outside blowing bubbles when Zachary and Jackson visit. Amy asks about the doctor’s appointment, Zachary says she is probably going to be an LP. Amy says to count their blessings that she will be healthy, nothing else matters. Zachary himself had quite a lot of health issues because of being an LP, Amy says she will keep praying that Lila will be healthy. Amy says that as an LP girl, she always felt excluded, but their daughter could be different. Zachary says he has met a lot of LP women that are confident and strong, and Lila can be too.

Matt and Caryn are visiting Zachary and Tori. Zachary gives them the news that the baby is going to be an LP. Matt is excited about it, but he knows that it is scary because LP’s can have health issues. Zachary thinks to have an LP girl is going because Jackson and she will have the same deal.

Jackson’s new bed arrives, they bought it online. Zachary just hopes the bed is accessible for him. Tori is worried that the directions are one page. They work together well to get the bed put together for Jackson. They have a stool that Matt made, it helps Jackson to get in and out of the bed. There is a little nervousness, they hope Jackson sleeps through the night. Tori says it could be an issue that he can get out of the bed.

They take a picture of Jackson in his bed for the first night. Getting him to sleep that night proves to be very challenging. He cried for a little while, but once he was out, he was out. They both know that when Lila arrives this is going to be more challenging.

Chris is cleaning out the pool, he is excited to propose to Amy. Amy is there, he tells her that she looks a little stressed. She says the house thing is depressing her. He tells her that it could still happen and she needs to stay positive, change the frown. He says sometimes she gets a little pessimistic and he works on making her change that. He assures her that it is going to happen, they are going to find her the right house. He says knowing that she is going to spend at least 10 years in the next house, it is better that she find the right one.