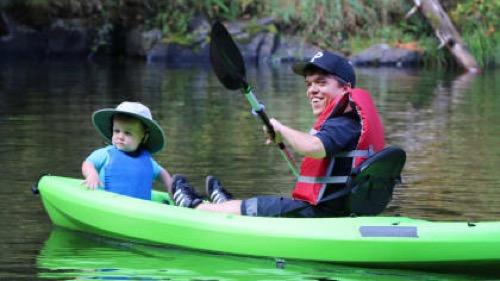 Matt is taking Zachary and Jackson around the farm, show them what he has done to clean it up. Zachary says one of his favorite memories is when Matt built them a water slide. They drive up to the old treehouse, Matt says it’s sad but he is taking it down because it is in bad shape. Matt is worried that Jackson won’t have the same memories. Zachary says he will have his own memories and he is lucky because Matt is building new things. Zachary thinks his father is going to have a harder time watching the treehouse being taken down than he will.

Amy and Chris go to another house to look at, she still can’t forget the house she made the offer on and she lost. Amy is getting tired of looking at homes, she is hoping that this new one is the one so she can stop looking. Meanwhile, Chris is also looking for him, he is hoping Amy says yes when he asks her to marry him and they both will be living there. This is a big house, Amy finds that there is a lot of space for everyone. Chris shows her the backyard, it is well manicured and a good size. Amy wants the kids to like the house, she really wants them to visit her there. She is thinking of making an offer, Chris says it has been on the market for a while so hopefully she won’t get into a bidding war on this one. Amy thinks she still has to imagine herself living in the house alone, she doesn’t know what Chris’ intentions are. There is a lot she likes about the house, she just hopes if she does make an offer that she gets it and can put this behind her.

Chris meets with his oldest friend, Rick, who is his oldest friend, they love playing poker together. Rick knows that Chris is going to propose to Amy. Chris says he mentioned to her father about him asking Amy to marry him and he said, well we always let the kids do whatever they do. Chris was hoping that he would get a bigger welcome into the family.

Zachary is over at the house looking for camping equipment. Zachary wants to know what is up for grabs in the garage, but everything he mentions, Amy says he can borrow. Zachary is excited about bringing Jackson on the trip. He tells Amy that Matt is going to tear down the treehouse, she understands. Amy tells him that she put another offer on a house, this one she got, they accepted it right away. She has an inspection happening and hopes nothing pops up.

Today is a big day, the fence is being delivered to divide the property, what Matt is calling “the wall.” He tells the driver he is excited, it is an ex-wife situation. Matt shows Amy the fence pieces and she is not impressed, it’s a fence. The two get into an argument, Matt says it is always like this.

Tori, Zachary, and Jackson are gone on their little vacation. They are staying in a cabin and Tori tells Zachary that she thought they were camping. Once they get settled, they all go on a hike. Zachary loves going camping, he loves the outdoors. Jackson seems to be enjoying himself, he falls down in a puddle and just gets back up. Zachary asks Tori if she is going to get pregnant again after this one, she says she needs time first to forget this one. This pregnancy has been harder than with Jackson. He tells her that he wants numbers three and four.

Amy and Chris are enjoying a drink outside on the porch, she tells him that she is shocked that she got accepted. He tells her that home inspection is on Monday. Chris tells her that if everything goes well, it will close at the end of the month. He wants to know when she will move in, she says she hopes by Thanksgiving. He then asks her if she told Matt, she says no. Chris says he is going to miss this house and the wide-open space. She tells him not to make it any harder on her. She knows that when she moves, she will have to make a big effort to see the children. Chris asks her if she has any regrets about the farm, she says no. She doesn’t want to be there and have a constant reminder of what they had. Chris tells her that he anticipates her putting on many more meals for the family.

Zachary, Tori, and Jackson are sitting outside by a small fire. They talk about the baby, Tori says that everyone she talks to who is having a baby and a two-year-old already, are loving it. Tori thinks it is going to be an adjustment for Zachary, it is not going to be all about him anymore.

It’s a new day, Zachary, Jackson, and Tori are going kayaking. Murphy, the dog is excited to be there as well. Zachary is in the kayak when Murphy jumps in the water and hops in the kayak, almost tipping Zachary over. Tori can’t stop laughing. Zachary rows back to shore and takes Jackson in the kayak. It was a short trip, but everyone had fun.

It’s a sad day for Matt, time to take down the treehouse. He has happy for one thing, twenty years and no accidents in the treehouse. Matt is in his rig and pushes it down while some of the family watches on. The final push, it’s about to go down. The treehouse was one of the most magical places on the form for the kids. Amy has lived on the farm for thirty years and feels a little sad when she looks on and sees the treehouse down. Jeremy tells her it is pretty exciting, it’s a new beginning. Audrey is there as well and she is a little sad. Matt turns to Amy and says there you go your treehouse is gone. She replies, your treehouse is gone, now you can move on. Caryn is there as well, it’s a little awkward for Amy, but she is being cordial.