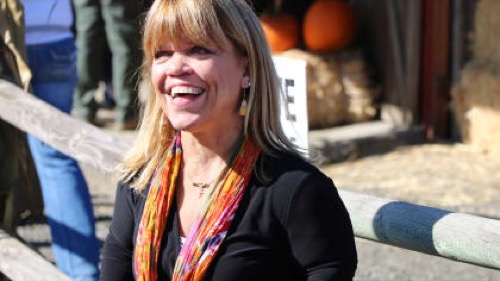 The Roloffs realize it may never be the same again. Amy and Chris host a 1980s throwback prom, but Amy struggles when sad news upends her life”

Matt moves Jackson’s airplane outside near the pumpkin patch for all the other children to share with him, Zach tries to guide him so that he doesn’t have an accident. Matt loved having Jackson there and participating in the process, it reminded him of when the children were younger. Matt can’t wait for Jackson to unveil the plane during the pumpkin season. Matt takes pictures and so happy.

At home, Amy shows Chris a dress that she wore back in 85 or 86 with lots of lace. She and Chris are planning a prom night with lots of friends because they have never gone to prom night. She shows him a blue dress, but he prefers that over the one with the pink lace. Amy didn’t get to her prom because she was never asked, in high school, she felt in the outskirts, left out all the time because she was the only little person in her high school.

Amy is looking forward to the prom, not only does she have a date, but she is engaged. She tells him that she is not going to be spending a day, as usual, during the pumpkin season with the family. Her mom is in her late eighties and her health has gotten a lot worse recently. Since the first time Chris met Amy, he has always known that she has enjoyed it, dressing up and being there with the family. He feels for her this year.

Amy is out with Deb looking for a prom dress, Amy wants something to compare her other dresses too. She is hoping she can find a dress that she doesn’t have to do major alterations on. Sometimes she had to laugh for some of them that she was trying on. Amy talks about Chris moving in with her, she is not nervous, and she thinks they will do fine. Amy did find a couple of dresses, she is not sure which she wears to the prom.

Matt tells Jackson that at 10:00 am he wants him to remind him to open the farm for pumpkin season. Matt and Jackson sit there and wave at everyone when they arrive. So many people are coming in, it was a busy opening Friday. Zach is in charge of private tours. Matt doesn’t know how much Amy will be involved, but he has confidence pumpkin season will go well. He loves private tours and has met a ton of fun people.

Zach has a good role that he likes. His mom has been trying to move out and plan the prom, it won’t be the same if she is not there a lot. He hopes she can finds some time to come down.

The big reveal is today, the airplane gets opened. There is a red ribbon at the door to the plane. Jackson is not impressed with the crowd, he wants to go back to mom. Jackson doesn’t want to pull the ribbon, Zach and Matt do it. Zach thinks it is great that Jackson had to share the plane with other kids, it helps his social skills.

At Amy’s house, she is sitting down on her computer. She is not really a part of pumpkin season, and she gets hit with some bad news, her mom passed away. She needs to flight out to Michigan, for her memorial service and to be with family. Amy is going to leave right after the prom and will definitely miss the pumpkin season. Last summer was the best vacation she ever had, all her children were there and her mother. She wishes she had more time with her as an adult and that she had spent more time with her grandchildren and great-grandchildren. Her mother’s passing brings up a lot of conflicting emotions.

Matt is driving around with Jackson, welcoming people to the farm, and telling them to have a great day. Matt finds Amy walking her dog. She tells him that her mom passed away, he gives her his condolences. She tells him that she won’t participate because she has to leave for the memorial. He tells her as much as she can come down, he would love to have her. Matt tells her to give his best to her dad when she sees him. The first day of the pumpkin season went very well, the airplane reveal was awesome.

Jackson gets his face painted and shows it off to grandpa. Zach hears about his grandma’s passing, it’s really sad, but he is happy that last summer they got to spend time with them. Matt organizes to get the whole family together for the ritual photo during pumpkin season. Zach loves pumpkin season, but he doesn’t know how long his father will be able to do it because it is a lot of work. Amy really thinks this will be her last season for pumpkin season as she gets less and less involved in the farm.

Today is prom night, Lisa, Deb, and Amy are getting ready and try to make themselves look great. Lisa tells the girls about her prom, she is the only one out of three that went. Amy’s friends have lost both their parents and they can have empathy for what she is going through. Amy is very thankful for her friends.

At the prom, Amy looks beautiful in her dress, Chris walks in, she doesn’t recognize him since his hair was brown and he was clean-shaven. Amy is so surprised, Chris beings her a hand corsage. Amy and Chris are named prom king and queen. Andy Stokes is there to perform while the king and queen have their dance.