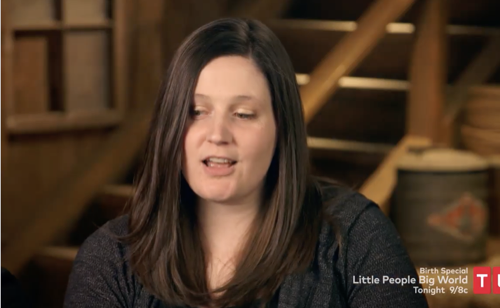 Amy is in a cooking frenzy preparing meals for Tori’s post-C-section recovery. Then, everyone scrambles when Tori goes into labor unexpectedly.”

Zach and Tori feel like they are rolling the dice with having a second LP child. Tori had this vision that she would have a mini her, but that is not God’s plan. Because LP’s heads are bigger, Tori has opted for a c-section. They have decided when Tori has the baby, Jackson will stay with grandpa. Lately, all Tori has been getting is heartburn, and she hates it so much. She didn’t want to have a baby shower because they are reusing a lot of the stuff from Jackson. But, Tori has agreed to have brunch with her and Zach’s mother.

A few days ago they got back from her mother’s memorial. They go to take a look at the house. Chris bought her a stool, but it is not high enough. He tells her that he can help her, but she doesn’t like that, she likes to be independent. The only thing she insists about is having the island lowered. She thanks Chris for going to her mother’s memorial. Her dad is doing ok, but she thinks she has to call him a lot more often. Amy is excited and happy that her family is growing, her mother would have been excited to see another great-grandchild.

Matt and Caryn are out shopping for food since Jackson will be staying a few days. They get the food, they have the place for Jackson to sleep, they just need the baby to come.

Tori, her mom, and Amy are at brunch. Her mom brings photos and they compare when each of them is pregnant. Having kids has put Tori’s life from a different perspective, she knows what her mother went through. Amy says she always wants to be a mom, and when she gave birth to twins she thought it was the best day of her life.

Amy and Chris head to a paint store to pick out some colors for the new house. Amy loves having Chris a part of everything. Although they have different tastes, she likes floral, he doesn’t. Amy is excited, it is going to be fun living together.

At Zach and Tori’s house, Amy is visiting and they talk about Jackson’s favorite food. She offers to make Zach’s favorite food while Tori is recovering. Tori tells Amy that she is so excited to see her daughter, but she is worried about the recovery of the c-section.

Zach and Tori are going through Lilah’s room, trying to get everything ready for her rival.

Zach and Matt are in the middle of an interview when Zach runs out. He gets home and takes Tori to the hospital. Meanwhile, Amy and Matt work together to take care of Jackson. Tori had yogurt before her water broke, so she has to weight eight hours before they will do the c-section on her. Zach has time to run home and get the diaper bag, they had forgotten it at home. Caryn and Matt pick up Jackson, Amy watched him until he finishes his nap.

Matt and Caryn get home with Jackson, she sits him on the counter and starts cooking dinner. Jackson goes to play on the floor with Matt and Caryn drops all the dried spaghetti on the floor. She continues to cook and Jackson keeps getting into stuff. Matt can watch the children in short windows, but he finds it hard for long periods. Jackson twists his spaghetti with his fork and Matt is so surprised.

At the hospital, once Tori lays on her side the contractions start coming really hard which changes plans for surgery, they take her in earlier.