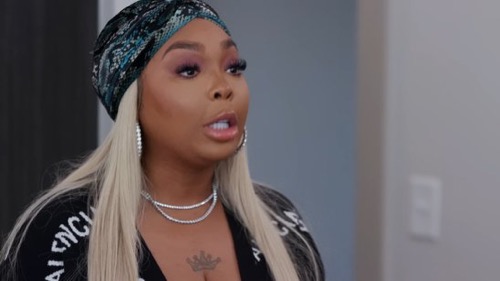 Tonight on VH1’s hit series Love & Hip Hop Atlanta returns with an all-new Monday, May 4, 2020, episode and we have your Love & Hip Hop Atlanta recap below for you.  In tonight’s season 9 episode 8, “The Kids Are Alright’,” as per the VH1 synopsis, “Bambi breaks the news to Scrappy about baby number two, and Kirk and Rasheeda pick up the pieces when Kirk Jr. is released from prison.”

Security has to separate Ki’Yomi and Cheyenne after they get into a fight in a parking lot. After they all get into their cars, Cheyenne says she is cool on Shooter but if she sees Ki’Yomi there will be problems.

After a crazy ski trip, all the girls are good. They hit the road. Bambi has to figure out how she is going to tell her husband they are pregnant. Sierra is heading home to tell BK they are through after he reportedly cheated on her.

Kirk and the family bail Kirk Jr. out. They are happy he is home. Meanwhile, Bambi and Scrappy are at a medieval ceremony where they are deemed the prince and princess of the south. They announce the royal family is having a child. Scrappy is confused and then elated.

Kirk and the family sit and talk with Kirk Jr. about his situation and being responsible. They tell him he could end up in jail again and he doesn’t need that, and they don’t either.

Sierra is throwing Paris a birthday party that is extra special after she was attacked in a bathroom at school. Tiffany is with her. They talk about BK and how Tiffany saw him cheating on Sierra. Sierra needs a solid man. Just then, BK lets himself in. She demands her keys. He tells her she is talking crazy. She gets her keys and tells him goodbye.

Kendra throws a spa day for the girls so they can meet and relax and celebrate her upcoming wedding to Joc. After they head to Lips. Some of the ladies talk at the club. They cannot believe Joc is settling down. They heard he was fooling around with a girl at the shop. Maybe he has changed. The ladies have fun and dance during a drag show.

Scrappy and Bambi have both their mothers over. Dee is mad that she found out they are having a baby on social media when she is sure Bambi’s mother CC knows. The grandmothers go at it. Scrappy brings his mom downstairs while Bambi’s mom CC brings out a voodoo doll. Bambi tells her to put it away. Bambi goes to see Dee and tells her she took things a step further with a eulogy. Bambi and Dee talk further and end up coming to terms.

It is the night of Paris’ party. BK and Karlie were not invited. Shooter arrives. Sierra gets him talking about the Ki’Yomi and Cheyenne drama. Shooter doesn’t want to talk about it. They bring Paris outside to see her gift. It is a car. BK shows up and brings Paris a gift and Sierra.

His gift to Sierra is a condom and print outs of her text messages to other men. She is a cheater too. Everyone watches as they argue. Some of the ladies start yelling at him. Sierra is going through enough.