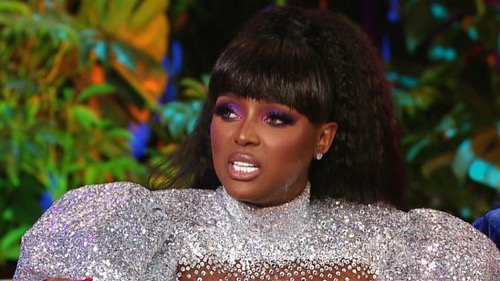 Tonight on VH1’s hit series Love & Hip Hop Miami returns with an all-new Monday, March 30,  2020, episode and we have your Love & Hip Hop Miami recap below for you.  On tonight’s season 3 episode 13, “Reunion – Part 1,” as per the VH1 synopsis, “Amara and Emjay open up about their complicated feelings toward each other and Shay shares her thoughts on what’s best for them.”

It’s a reunion for the cast as they talk about their season. Claudia Jordan is the host for part one. Trick Daddy and Trina talk about her show. Amara talks about seeing her dad at her concert.

Claudia shows highlights of Amara and her mom after she moved Emjay in. After she asked him to leave, he did. But Amara shares he is back in her house but they are not together. Emjay gets upset when his sister starts yelling on stage that he is blind. Amara gets angry as well as Emjay. They both share how they support one another. Emjay’s sister understands that but she still wants him to move on. Bobby gets into it. He doesn’t understand why Amara even listened to Emjay’s ex. PreMadonna gets mad, Emjay’s ex is her friend.

Claudia shows a clip of Amara confronting PreMadonna about bringing Emjay’s ex to lunch. The two get into a physical fight and are broken up.

On stage, PreMadonna shares that she was only trying to talk to Emjay about the situation when she got into a fight with Amara. The two start arguing back and forth.

Emjay is asked to come backstage away from the drama. Kendall, the host, asks Emjay why he is still in Amara’s house. He shares it is to support her. Kendall also brings JoJo backstage to address the cheating rumors between the two. It looks like Emjay is innocent.

PreMadonna talks about how she left Miami to rise to the top. Trick Daddy thinks she needs to keep doing what she is doing. Miami Tip shares that PreMadonna just up and left. PreMaddona understands where she is coming from. They have since talked about their fall out and are good.

Trina discusses how Jullian missed used his finances. It affected her album and also got her into a fight with Amara.

Jullian defends himself and says a lot of his money was spent on Trina’s album. Trina thinks he’s still lying. She doesn’t understand why he would sign Amara amid all his financial issues. He apologizes but Trina doesn’t care. Trick daddy jumps into the fight. He threatens to break Jullian‘s jaw. Jullian did the same thing to him. When asked if anybody can speak good about Jullian the whole room stays quiet.

PreMadonna goes on a tear about Joseline and how she’s just angry that PreMadonna is so beautiful and successful and even managed to carry on after postpartum while Joseline dabbled in unknown substances.

Miami Tip talks about Santana and how things got a little crazy when he exposed himself at a club. They also show Suki and him getting into a fight. On stage, they talk about what happened and get into a fight because Santana thinks it was really an LBGTQ issue. Tip doesn’t think so. He was out of control. They go at it. Trick Daddy steps in. He sees both their sides but talking and apologizing for hurting one another is better.

They go back over Trina and Nikki Natural’s fights during the season. Trina points out that she doesn’t disrespect anyone but Nikki gave her a reason. Nikki starts to roll her eyes and that is enough for Trina to go crazy. She stands up and goes at Nikki. Security has to intervene. Nikki is brought backstage and interviewed on camera. Trina gets angrier and gets up to leave. Bobby follows her.