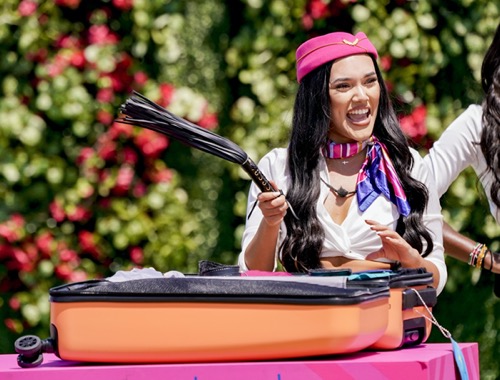 Tonight on CBS their popular reality show Love Island premieres with an all-new Monday, August 25, 2020 episode and we have your Love Island recap below for you. On tonight’s Love Island season, 2 episode 2 as per the CBS synopsis, “A group of single islanders compete for a chance at love and friendship in a gorgeous villa in Fiji.”

So make sure to tune in tonight between 8 PM – 10 PM ET for our Love Island recap.  While you wait for our recap make sure to check out all our television spoilers, news, recaps, and more, here!

Following the coupling of some of the guys and girls in the last episode, the ladies talk about what went down. Kaitlynn wants to make a connection and can’t. Justine’s heart stops when Jeremiah gets a text to go on a date. Carrington also gets a text. They are both going on a date. Kaitlynn says she is happy for Carrington. Justine doesn’t feel great. She wishes she would have left it in the friend zone.

Carrington meets with Kirstin while Jeremiah meets with Rachel. Meanwhile, Tre and Justine spend some time. He talks about his past and how he is really looking now. He finds her attractive. He kisses her cheeks and forehead.

Carrington tells Kirstin she is a blessing. He was coupled up but that changed earlier today. Jeremiah and Rachel are also doing well. They both like each other’s vibes. Their dates end and they all go meet the others. They all sit and talk. Mackenzie makes it know that she is coupled up with Connor. After a few jokes are made by Johnny making Mackenzie look jealous, Mackenzie gets up and leaves. Justine follows her. Mackenzie cries.

Cely and Johnny spend some alone time. He tells her he could care less about the new arrivals. Connor finds Mackenzie who is crying and mad at him for not coming after her.

Rachel and Kirstin talk about their time so far. Everyone goes to bed. Tre sleeps alone. Some of the ladies pair up. Johnny and Cely cuddle.

In the morning, the ladies get ready. Kaitlynn tells Kierstan to feel free to pursue Carrington. The guys work out while Rachel and Kierstan talk. Rachel wants to get to know Jeremiah.

Kiersten heads over and grabs James for a chat. They spend some time talking. He tells her Moira is a bit shy. Moira sits with Mackenzie and Connor and tells them she isn’t in charge of James but it appears as if she is jealous.

It is time for a game. They guys and girls will compete against one another. Dressed like a flight attendant or captain, the ladies receive dirty secrets in a piece of luggage and then have to figure out who it is about. During the game, Rachel really gets into kissing Jeremiah which makes Justine jealous. Justine makes sure to kiss Jeremiah next to put her foot down. Kiersten kisses James next but he finds his way over to Moira and kisses her. The girls end up winning the game after guessing whose dirty secrets were whose among the guys.

After the game, the guys and girls sit separately and talk. Carrington is really into Kierstan. Connor also shares he is pretty into Mackenzie. Jeremiah is feeling bad because he really likes Rachel.

Mackenzie and Connor talk after about his secret, regarding S&M. He tells her that he has only had sex with 3 people and thinks sex is very special. Jeremiah finds Justine and tells her he just wants to be friends. She later finds Cely and tells her what happened. She wishes he would have told her the night before. After Justine sits and talks with Tre. He makes it clear he wants to get to know her.