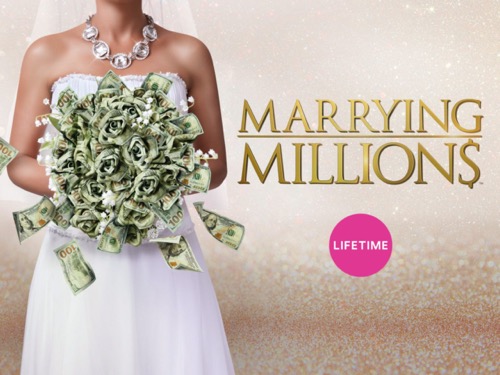 Tonight on Lifetime their hit series Marrying Millions premiere with an all-new Wednesday, August 5, 2020 episode and we have your Marrying Millions recap below.  On tonight’s Marrying Millions season 2 episode 1 called, “Steaks With Snakes,” as per the Lifetime synopsis, “After an eventful first year together, Brianna and Bill plan a big blowout in honour of Bri’s 22nd birthday; Brian and Gentille reconnect for the first time since their wedding day break-up; business powerhouse Nonie confronts her skater boyfriend.”

Brie is just 21 and she is with Bill who is 61. He is a commercial real estate developer with a lot of money. She has had to adjust to his lifestyle and money. She shares how she has been judged.

Bill and Brie talk about how she will be 22 soon. He wants to throw her a party and he plans to invite his ex. They do not get along well but he wants her to try.

Desiry is from New York. She doesn’t have a lot of money and lives frugally so she can continue to do her charity work. She hasn’t had good luck with men. She has since met Rodney who is a millionaire. He has two homes and is looking for love. He likes Desiry because she appreciates him. She is smitten with him.

The two talk by video. She is in L.A. and he is in D.C. He pays all of her bills but she won’t move in with him unless they marry. She also doesn’t like how he keeps their relationship secret.

They have been dating for 2 years and she has never met his family or friends. He tells her that he just wants to keep things private. She thinks something is wrong.

Nonie isn’t your typical millionaire. She has been into beauty since she was younger. She owns several beauty companies and several homes. She was married for 22 years and is now divorced. She has since met Reese, who is 30. He is into skateboarding and music. He lives in a very modest home. They talked for a long time before the meeting.

Reese works as an arborist. He isn’t working much. Nonie asks him if he is going to make rent. He isn’t sure. She doesn’t care if he has money. She mentions how they should integrate their groups. He doesn’t want to. She thinks it is important. He has met a few of her friends and he doesn’t think they like him.

Rodney picks up Desiry at the airport and brings her to his new lake house. She is thrilled to see it all. She cannot believe it is all hers. He asks her about sleeping in the same bed. She tells him no. They need to marry.

Brian is in his 40s and he still lives with his parents. He is in construction. Since Gentille left him at the altar, he has been miserable. Now he is meeting her after months for coffee. He arrives late. They get right into their relationship. He wants to start over. She tells him she has moved on. He asks her if she is cheating. She points out that they are not together. She hopes he plans to move on.

Bri gets ready for her party. She stops by her mom’s to see what she will be wearing. Her sister is also going. They are worried they will be judged. Bri’s mom is annoyed Bill’s ex is coming.

Rodney and Desiry eat dinner after he cooks for her. He wants to know if she wants to move into the lake house. She does not want to because he hasn’t told any of his family about her.

It is the night of Bri’s party. She is nervous. Bill’s ex is there. She is judging it all from the corner. Brie’s family and Bill’s side is not mixing. Bill introduces his ex to Brie’s mom. Things get uncomfortable.