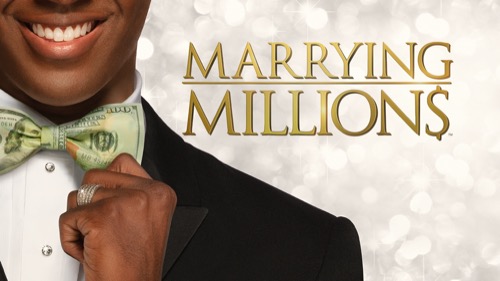 Tonight on Lifetime their hit series Marrying Millions premiere with an all-new Wednesday, August 26, 2020 episode and we have your Marrying Millions recap below.  On tonight’s Marrying Millions season 2 episode 4 called, “I Can’t Get No Satisfaction,” as per the Lifetime synopsis, “Bill organizes a dinner for Bri’s mum, Sharon, and his ex-wife Kathleen to resolve tensions, but soon he becomes the target; Rodney comes clean to his mum about his relationship; Reese considers a new way to make a quick buck.”

Rodney didn’t like how he left things with Desiry. She left him while on vacation with him and she did so for a very good reason. She left him after she realized he wasn’t going to introduce her to anyone. She wanted to meet his family and for them to get to know her. She also wanted to stop feeling like she was a dirty secret. Desiry was a grown woman and she didn’t want to keep playing these games. She wanted to openly be in a relationship with Rodney. It was now up to him to decide what he wants and she wasn’t going to hold his hand while she made a decision. She didn’t reach out to him after she left.

It was Rodney that called her. He called her several times before she picked up and she didn’t say anything new once she did. Desiry repeated her desires. She wanted to meet his family and she wanted to be official. She also wasn’t going back to Rodney until she gets what she wants. Desiry has pretty much left it up to Rodney. He either gives in to her demands or their relationship is over. Rodney tried to sweet-talk her tonight and it went nowhere. Desiry wasn’t falling for his smooth-talking ways anymore. She didn’t fall for it when he tried to say he did introduce to her someone because his assistant doesn’t count. The assistant was not his friend or a family member. She was just an assistant.

Over with Brianna and Bill, Bill is still set on pleasing his ex-wife Kathleen. Kathleen is the mother of his children and they do have a good relationship. It just wasn’t fair to pressure Bri to please Kathleen. Kathleen didn’t like Bri’s mother and so Bill and Bri were going out to dinner with her and Brianna’s family as a way to mend fences. Bill also told Bri what to wear to the dinner. He vetoed certain outfits on what he assumes his ex-wife would like. Bill was going Kathleen a lot of power in this situation and he wasn’t listening to Bri when she tried to bring it up. Bri didn’t like having to dress to please someone else.

Bri tried to complain to her husband about it. She just never expected that Bill would again repeat how important Kathleen is to him. Bill likes saying that he has to be on good terms with Kathleen because she’s the mother of his children and so he puts that above everything else. He puts it above his relationship with Bri. She has to get on with Kathleen. She’s not allowed not to. Bri was therefore told this meeting with her family has to go well and so it definitely feels like her relationship with Bill is dependent on what Kathleen thinks. And ignoring her like before isn’t going to work.

Gentille was not in a relationship. She recently came out of a relationship with Brian and she was doing her best to move on. She was open to meeting someone new. She was sorta hoping that it would happen soon and, if not, she was prepared to go ahead with her baby-making plans by herself. Gentille wants to become a mother. She was getting up there in years and she didn’t want to use a surrogate. She wanted to carry her baby herself. So, she either needs to get to work on doing it naturally or she has to go the IVF route with a donor. Gentille has also moved. She’s moved to a fixer-upper and it was no surprise for her friends because they said Gentille dates fixer-uppers as well.

Dani doesn’t have to worry about the dating scene. She was with Donovan and the two were serious about each other. They’ve both said they love the other. They also said they were committed to each other and so the next step is to make things official. Dani wants to get married and it was Donovan that was dragging his feet. He didn’t want to get married until he was absolutely sure. He wasn’t really there yet because he thought Dani liked a little too much for his money and he wasn’t afraid to tell his mother that. He talked to his mother about his misgivings. He said he didn’t want to get married for the wrong reasons and, unbeknownst to him, his girlfriend Dani was sharing some misgivings as well with her own family.

Dani went shopping with her mom and sister. She took Donovan’s credit card to go shopping and her mother hadn’t felt comfortable about using it. Her mother would like for Dani to be financially independent. She doesn’t want Dani to rely on her boyfriend for everything and that includes work. Dani works for Donovan. He also doesn’t like to appear as if he’s favoring her and so he underpays her for the work she does. Dani doesn’t like that. Her mother doesn’t like that. Her mother thinks Donovan is doing that to keep Dani dependent on him and so she talked to Dani until Dani was finally ready to bring up a raise to Donovan. And once Dani did so, Donovan shot it down because he said she was ungrateful for all the things he does for her.

Then there’s Reese and Nonie. They were both facing questions from their loved ones about who they chose as a partner. Nonie’s friends all thought she could do better than Reese and so she was a little surprised to hear from Reese that his family also has a problem with them dating. Reese’s family wanted him to be with someone who could give him kids. They told Reese that he was the only boy and that it was up to him to carry on the family name. They wanted him to have a boy to keep the name going and that insulted Nonie. She couldn’t have more kids after she got sick a little while ago and so biologically speaking she was done with her one child.

Nonie has a daughter with her ex-husband. She was hurt that she couldn’t give Reese a child because she would have like to have done so and she was also offended about his family wanting him to have a son. Nonie asked what if he has a girl. She thought it was unfeminist that his family demanded he has a son and Reese told her that his family would want him to keep going until he does. Reese has sisters. His sisters have children and one of them was even unmarried. This sister could easily have given her own son her last name and that would have kept the name going. And so that’s when Reese said that’s not the same thing because his having a son will be different.

Rodney meanwhile finally made a decision about his girlfriend Desiry. He decided that he was going to introduce to his family and the first met he wanted her to meet was his mother. Rody has a complicated relationship with his mother. He didn’t grow up having the sort of mother-son relationship that he wanted and he doesn’t talk about his personal life with his mother. His mother was also known to be opinionated. She would have something to say about everything and Rodney didn’t want to hear what she has to say about Desiry because he knew Desiry was unpolished. Maybe too unpolished for his mother. And so him bringing up Desiry was a big step for him.

As for that meeting between Bri’s family and Kathleen, it did not go well. Sherry didn’t care how rude she was to Kathleen because she felt Kathleen had crossed and that she hurt her daughter. Sherry and her husband also thought Kathleen might still be in love with Bill. They asked her about it and, Kathleen says she will always love Bill, she doesn’t want him back. She said Bill was too unfaithful. He cheated on her constantly and she doesn’t think he has in him to be faithful. And so that led to Sherry grilling Bill because she said she would kill him if he ever cheated on her daughter.