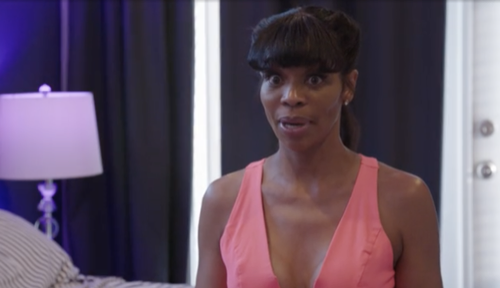 Tonight on Lifetime their hit series Marrying Millions premiere with an all-new Wednesday, September 2, 2020 episode and we have your Marrying Millions recap below.  On tonight’s Marrying Millions season 2 episode 5 called, “Birthdays, Babies, and Blowups,” as per the Lifetime synopsis, “Rodney finally caves to Desiry’s demands and introduces her to his parents. However, Desiry quickly learns that some secrets may be better left in the closet. Kattie and Kevin’s relationship is at an impasse after he refuses to help pay her rent and she contemplates if he even loves her.

Rick is happy to be back on his home turf in Miami, and Erica has an extra sexy surprise planned for his 69th birthday. Bill struggles to find the right words when Bri asks him about marriage.”

Desiry leans on her friends during good times and bad times. This time it was good. Desiry recently heard back from her boyfriend Rodney and he invited her to meet his parents. Rodney agreed to introduce them after Deisry had issued an ultimatum. She hadn’t liked being his dirty secret nor she did like how the only person he introduced her to was his assistant. Desiry was too grown to be playing childish games. She told Rodney to take her seriously or they were over. He chose to take her seriously. He agreed to introduce her to his family. He also told Desiry how much she means to him and so right now she was walking on Cloud 9.

Desiry was seemingly getting the commitment she asked for. She was hoping that meeting his family would be the first step in them getting married one day and so she was telling her good friend everything that’s been going on. Everything that she’s feeling. Desiry thought she was getting commitment and so meeting Rodney’s mother was quite an experience. It did not go as expected. Desiry was her usual self and Rodney was almost embarrassed by her. He wished Desiry wouldn’t have mentioned their sex life to his mother. His mother didn’t need to know that Desiry was waiting for marriage to consummate their relationship.

Rodney’s mother also mentioned they shouldn’t rush into things. She thought they should take their time as they get to know each other and so she was a little bit out of the loop. Desiry and Rodney were not rushing into anything. Desiry told Rodney’s mother that they’ve been together for two years now and what went unsaid was the fact they were no longer children. They’ve lived their lives. They were both up there in age and so two years was a perfectly respectable time for them to discuss marriage and/or children. Children were not going to come into the relationship until Desiry gets that ring. And so Rodney really has to decide what future it is he wants.

Gentille wants children. She originally saw herself having children while she was in a committed relationship and unfortunately things didn’t work that way. Gentille is single. She was in a serious relationship and it didn’t work out. She was also up there in age. The window on her having a biological child was closing. Gentille desperately wanted to carry her own baby and so she decided to pursue having a baby on her own. She later sought out a fertility doctor. They talked about her options and her age might mean she wouldn’t be able to provide an egg. Gentille was asked to consider egg donors and she was willing to pick up one if it meant she would have a baby.

Katie had her own set of troubles. She was low on cash and she had needed assistance to pay rent. Katie thought she could turn to her boyfriend in her hour of need. She reached out to him and she told him that she needed help to keep her apartment. Katie thought Kevin would help her. Instead, Kevin gave her a lecture about why he doesn’t loan anyone money. He had loaned a previous girlfriend thousands of dollars and she never paid him back. Kevin was so vexed about losing money at that time that he decided to never loan another girlfriend. Not even a thousand dollars which is nothing for him as a millionaire.

Katie had been so upset with him that she stormed out of his place after she was rejected. She too turned to her friends and her friend thought Katie should write off the relationship. Katie’s friend thought she couldn’t depend on Kevin and so what’s the point. If he isn’t being there for her when she needs him the most, then he’s never going to be there for her. Katie listened to her friend. She did think maybe it was time to break up with Kevin and just as she was seriously considering it that’s when Kevin surprises her at the gym with flowers. He showed up out of the blue. He came with some flowers and he’s never done that before. Katie thought it sweet.

Speaking of sweet, Erica put something together for Rick. It’s his birthday. Rick was turning sixty-nine and he usually celebrates his birthdays in style with these parties and all of his friends being invited. But that wasn’t what Erica wanted for Rick this year. She wanted it to be just the two of them because she wanted Rick to know how much she loves him and she also had to talk to Rick about a few things. Like marriage. Rick mentioned to Erica’s family that he was interested in marrying Erica and he’s ever asked Erica what she thinks. She received no official proposal so far. She was also told that a proposal could come with problems with her family.

Erica’s family doesn’t approve of Rick. They think he’s too old for Erica and they wanted what would happen next. Rick has mentioned marriage He’s also said that if anything happens to him then at least he left Erica a wealthy widow. Erica now has to decide if she wants to marry Rick. She wasn’t like the other woman. She didn’t openly talk about marriage while Desiry mentioned it in front of his parents. Desiry also said they could live bicoastal and so Rodney put his foot down. He wasn’t ready to live bicoastal. He was already paying Desiry’s rent and her bills. He brought this up at the dinner table and so now his parents know he’s paying Desiry’s way. And they suspect Desiry is a gold-digger.

And Bri is questioning her own relationship because she heard Bill say monogamy is impossible and so what does that mean for them? Bri later asked him if he was cheating on her. He swore he wasn’t, but he still wasn’t ready to marry her. He thinks marriage is a piece of paper they don’t need.