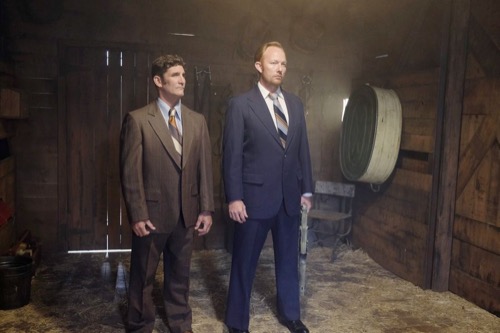 Meanwhile, Daisy and Sousa find themselves at a disadvantage against a power hungry Nathaniel Malick and his goons, and Coulson will have to do the thing he does best in order to save the future.”

The team was forced to give up their position in order to destroy Project Insight. It was a calculated risk and unfortunately, it might not have been worth it. The Chronicoms found them. The Chronicoms also noticed that the team was divided what with Daisy being captured by Malick’s son and half the team is stuck on earth. Mack had tried to recover, but he got rid of the only reason the Chronicoms would keep his parents alive and so he had to intervene. He decided to go after his parents with Yo-Yo and he left out Deke because he found out what Deke had done. Deke had killed Malick.

Deke killed Malick because he was allegedly creating too may waves. Only he never bothered to clear it past the director and he held no remorse. He seemed a little too okay with killing Malick. He was ordered to bring him in and the fact he failed in that mission should have made him apologetic. He instead wasn’t backing down from what he did. He made it known he would make that choice again and so that’s why Mack sidelined him. He did so in spite of Deke being the most knowledgeable about their current situation. Mack left him behind and he went looking for parents with Yo-Yo.

Mack left the ship. The ship was later fired upon and both Coulson and May were forced to watch. The two of them had been arrested. They were being held on base and no one was believing their story about the Chronicoms. The pair even ran into a Chronicom. She was working under Agent Stoner and May felt nothing when she was in the room. It had reminded May of how she felt around Coulson. May told Coulson her suspicions and they actually got into an argument about it. Coulson was tired of May treating him so coldly. He hadn’t liked hearing how she felt nothing around him and so he pushed and he pushed until her emotions slowly came back.

It turns out May is sick and tired of mourning him. Coulson would die and then he would come back. He’s come back so many times now that May is over. She told him as much and she revealed her frustration with the whole process. May also called him a machine with a simulated personality. She threw out there to hurt him and it made Coulson think. He wondered what would happen if the enemy was able to transfer personalities. Not just faces. Coulson was onto something and he didn’t even know how right he was. The enemy was “upgrading” their clones. Personality was now being incorporated.

Coulson and May were still under arrest. So, they had to figure out a way out of their sticky situation and they were doing so as Mack rescued his parents. He had been happy to see his parents again. He sort of let it slip that saving them was personal for him and so they just thought he was a weirdo. Mack also received a lot of pushback on his escape plan. His father didn’t know Mack was his son and so he questioned everything Mack came up. Mack had to be a little creative with his dad. He tricked him into helping and they eventually were able to work together. And they were escaping right as Coulson and May did the same.

They escaped their locked room. They found General Stoner and they protected him from getting his memories wiped by the Chronicoms. He now believes in their tale about an advanced species. He had lost several agents to the Chronicoms and he didn’t want to lose anyone else. Stoner evacuated the base. He wanted to get his team topside and Coulson and May wanted to stop the Chronicoms. Coulson later found the system the Hunters used to contact their Predictor. He found a way to contact Sibyl who was behind the Chronicoms current plan for domination. He talked to her about where they were and how he wasn’t really a Chronicom.

Coulson was explaining what he was to Sibyl as Simmons was dealing with her memory problem. She was losing her memory and she desperately needed it to fix the ship after they had gotten hit. Simmons had turned to Enoch for help. He was working on her when Deke found them and misconstrued the situation. Deke knocked out Enoch. He woke up Simmons and told her that Enoch was evil, but she corrected him. She told him how Enoch was helping her and she revealed to him that she was losing her memory. She freaked out Deke with her explanation. He didn’t know how to repair her memory. He thankfully knows how to help repair the ship and so they worked on it together.

Meanwhile, Coulson got Sibyl to reveal her plan as well as where Daisy’s location. He then told her that his superpower was dying and he said that because he found their ship and he brought along some explosives. Coulson blew up the ship. He killed himself along with several hunters and its okay because he knows he’s going to be brought back. He has faith in his team. Coulson knew they wouldn’t keep him dead for long and his sacrifice helped his team. May and Stoner got to Mack. They saved his life from a Chronicom and this in turn allowed him to get his parents back home where they belong.

Mack and Yo-Yo were later told that Coulson died again. May cheered him up with the fact that Coulson will come back like he always does and they were returning to the Zephyr when May realized that something was wrong with Mack’s dad. She was getting nothing from him. Like he was a Chronicom. He had injured his arm back at the base and so Mack forced his father to reveal his arm. He wanted to see if John was injured like a human or if he was a machine. John revealed he was a machine. Mack’s mother was a machine too. They had unfortunately harvested his parents a while back and so Mack lost them both.

Mack defeated the people who looked like his parents. He returned to the Zephyr where even Deke was keeping Simmons’s memory problems a secret now and thankfully Daisy was there with Sousa. They had been held captured by Nathaniel Malick. He had tried to take Daisy’s powers and it slowly started to kill him from the inside out. Sousa was able to grab Daisy and run during all the chaos. And so they’re safe now.