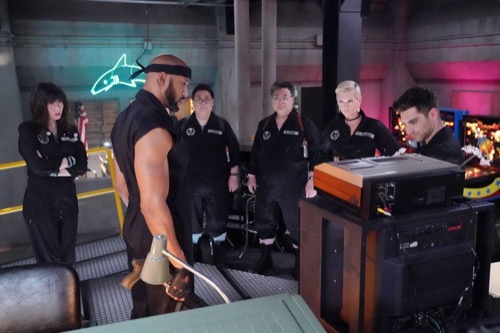 Tonight the ABC series Marvel’s Agents of S.H.I.E.L.D. premieres with an all-new Wednesday, July 8, 2020 season 7 episode 7 and we have your Marvel’s Agents of S.H.I.E.L.D. recap below. On tonight’s episode called, “After being unexpectedly stranded in 1982, Mack retreats to his childhood home to process the death of his parents, while Deke gets to work scouting a chart-topping group of new agents.

With no idea if or when the team is coming back for them, time seems to finally be on their side, at least until the killer robots show up.”

Mack had needed some time to himself. He had lost parents once before and now he’s had to lose them again. Mack left the Zephyr. He took his bike out and Deke followed him, but unfortunately, the ship was forced to leave and so that meant both Mack and Deke were left behind in 1982. They also weren’t alone. Sibyl was there as well. She wasn’t taken out by Coulson’s explosion.

She was still around albeit trapped in a very dated computer. Sibyl managed to find a computer genius at the time and she convinced him that she was friendly. The man she found was lonely. He did not have friends or much family and so he listened to Sibyl as she lied to him. As she manipulated him into getting what she wanted.

Sibyl sent him blueprints. He created an A. I. that was light years away from what it should have been and she even got him to return her voice. Sibyl can now talk to him directly. She was passing messages off to him as Mack was wallowing in his depression. Mack visited his parents’ grave. He visited his old house to see how the younger version of himself was doing as well that of siblings. Mack also did his best to ignore Deke. Deke had to track him down using a shady guy he hired and afterward, he tried to reach out to Mack. Mack ignored all attempts. He didn’t want to play ball or hang out.

Mack hadn’t wanted to leave his house. Deke had to lure him out with a mysterious note about meeting him at a bar and so Mack showed. He showed up at the bar. He asked the bartender if she knew Deke and she laughed. She laughed because Deke was apparently very well known. He was a star at the bar. Deke has been playing music with his band and most of his songs were “created” thanks to his prior knowledge of the future. He was totally cashing in. He was using his knowledge to get notoriety and Mack rolled his eyes so hard when he saw it. He couldn’t believe Deke lured out of the house for this.

Mack was all ready to take him to task when he saw him again. He had his lecture all lined up and then Deke said that his cover band is really a cover. Most of his bandmates were equipped at spycraft. He recruited them to help him fight the Chronicoms and that’s another thing. He found out the Chronicoms are still a problem. Deke has been using the old base as headquarters and he managed to save Coulson because Coulson hid his consciousness on a hard drive. And if Coulson could do it, they were pretty sure Sibyl could do it as well and so they’ve been tracking power surges in the city.

Coulson couldn’t decipher all on his own. He and Deke managed to trace Sibyl back to the power surges and their current belief is that she’s building new hunters. Which is why they reached out to Mack again. He needed to be aware that there was a problem and now he is. Mack also got to sit in on one of the new team’s practice sessions that the same team went on to fail.

They were crap at being spies and so Mack told Deke he was repeating the same mistakes as before. He was building something based on a lie, surrounding himself with sycophants, and to make things worse the drummer was high all the time on cocaine.

Mack also reminded Deke about his supposed failure. Deke had killed a man he was not supposed to kill and he created waves when they were supposed to be creating ripples. Mack made it seem like his parents died because of Deke’s mistakes, but Deke has been trying to do the right thing. He’s been visiting the young Mack and his brother. He’s been dropping off toys and school supplies. Deke has been trying to make things right. One of his new friends had revealed to Mack what Deke was doing. She told Mack to go easy on Deke because he was at least trying to be there for everyone and it was they were talking that the new hunters targeted them.

They were a little low tech. Only the Chronicoms managed to stage a comeback and they came back to base to kill what little of the team there was. Mack was forced to come back too. He returned to the team and together with the new guys they were able to kill the one hunter after them. They killed it and then they talked about why it was there. Sibyl should by now that SHIELD wasn’t its old self. She should know unless she was no longer tied to the Time Stream. This was the weapon she was using to manipulate time like she did poor Russell. She killed Russell and she was going to kill everyone at the base if they stood in the way of her regaining the Time Stream.

Not that the team was going to let her have it. They fought back. They killed several machines and the Chronicoms were forced to retreat. Sibly managed to getaway. She was still a robot in the 80s and so her options were limited. There was also Mack. Mack was his old self again after the fight. He even visited his younger self as a friend of Deke’s and that helped him to heal after his parents’ death. And eventually, their friends, on the Zephyr, returned to pick them up.

Sadly by then, the Chronicoms had reached out to Hydra and they formed an alliance of evil.