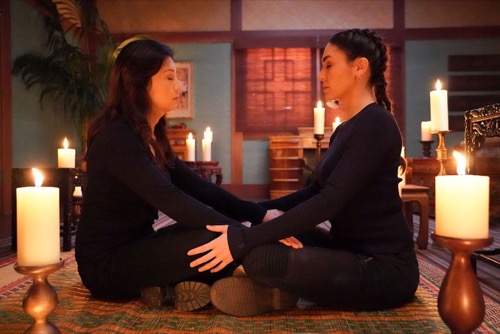 Tonight the ABC series Marvel’s Agents of S.H.I.E.L.D. premieres with an all-new Wednesday, July 15, 2020 season 7 episode 8 and we have your Marvel’s Agents of S.H.I.E.L.D. recap below. On tonight’s episode called, “After, Before,” as per the ABC synopsis, “With the Zephyr’s time drive malfunctioning, the team is quite literally hurtling toward disaster and Yo-Yo may be their only hope. To get her powers back, she’ll need to enlist the help of an old adversary and revisit part of her past long hidden away.”

The boys had their adventure in the 80s. What they didn’t know was that the team had their adventure as well. The team had to deal with a little problem with the ship. The Zephyr kept jumping around in the timeline. It was going and there was no stopping it. It would keep going until eventually, the ship lost itself in a time loop. Simmons and Enoch had no idea what to do about it. They used what little time they had in the 80s to go collect Mack and Derek and then they jumped again. It was creating such a problem that Simmons had to go to the Director about it. Mack was still in charge and he needed to approve of anything they did.

Simmons explained the problem to the Mack. She told him what they faced if they couldn’t get control of the time drive and then she said why she couldn’t fix it. She said there were pulses around the section they needed to reach. They either had to make themselves fast enough to reach it or slow it down long enough for either Simmons or Enoch to get to it. This would have been the perfect time for Yo-Yo to use her powers. But she couldn’t. Her powers disappeared after she was struck with the shrike. She needed to find a way to regain them and so Daisy came up with a suggestion.

Daisy suggested her mother Jiaying. At that moment in time, she knew her mother would be at the Afterlife and so all Yo-Yo and May had to do was get there before the next jump. The team thought about this plan. They later decided on doing it because it was the only thing they could up with and so Yo-Yo left with May. The two traveled to the Afterlife. They met Jiaying who was naturally suspicious. She wasn’t sure why or even how anything could take powers away from an Inhuman. Jiaying was also working with someone named Li and Li hated the two women onsite. He wanted to keep them prisoner.

He felt the same even after confirming that Yo-Yo was in fact inhuman. Li didn’t want them leaving the compound and so it was Jiaying who wanted to help her fellow inhuman get her powers back. She would soon run several tests on Yo-Yo. She would find nothing physically wrong with her and so she informed Yo-Yo that the problem was with her mind. Yo-Yo was mentally blocking herself from reaching her true potential. She needed help in accessing that and Jiaying suggested they use May. She noticed that May had an empathic gift in spite of not being an inhuman herself. Jiaying said they should use May’s gift to help Yo-Yo go down memory lane.

Jiaying wanted them to sit close to each other. She wanted them to meditate with each other and that wasn’t their style. They chose to work out. They fought each other and their connection through that did help Yo-Yo access her memories. She remembered some pretty dark stuff. She remembered being ten or eleven and her dad got mixed up with some bad people. She had been sent away because it was so dangerous. She went to live with an uncle and unfortunately their family had fallen prey to another villain. A guy with a gun came in demanding all that they had and Yo-Yo hid her grandmother’s ring.

She wanted to protect the ring. It’s just moved it after the thief saw it and so he got mad. He got into a fight with her uncle. Her uncle was shot and Yo-Yo has always blamed herself. She wondered what would happen if she had just left the ring where it was. Yo-Yo was processing her grief as they overheard Li and Jiaying talking about someone. May went to go see what they were talking and she found out they had been talking about Kora. Kora was inhuman. She couldn’t control her gift and so that’s why Jiaying and Li had wanted to help Yo-Yo. They thought there was a way to remove someone’s powers and they wanted to use it on Kora.

Kora blew up her room. She injured someone and then she ran off. She ran into the woods where she planned on killing herself, but she was found by someone. She was found by Hydra. Hydra had found Afterlife and they attacked it. Yo-Yo and May both armed themselves to fight off the invasion. This fight wasn’t going to be easy or clean and they were on a timeline. They had two hours left to get back to the ship. Yo-Yo and May couldn’t think about that as Kora came back. Kora had been convinced that she had been held back. She started attacking the very people that were helping her and so everyone made their escape.

May and Yo-Yo tried to convince Jiaying to come with them. They even said they would protect her and she couldn’t because she wanted to go back for her daughter. Jiaying left. May and Yo-Yo went back to the Zephyr. Yo-Yo was beating herself up because she thought she had failed. She was talking it out with Yo-Yo when all of sudden it clicked for her. Yo-Yo went and she reached the time drive. She stopped the shipping from jumping into oblivion. Yo-Yo saved them and she later told Mack that she just needed to believe in herself again. And with what she did, the team believed themselves safe.

Daisy returned to the tank so that she could heal. Coulson who was given a new body had come back and rejoined the others.

The whole team had thought the danger had passed, but sadly the ship had jumped again and so there still is a problem.