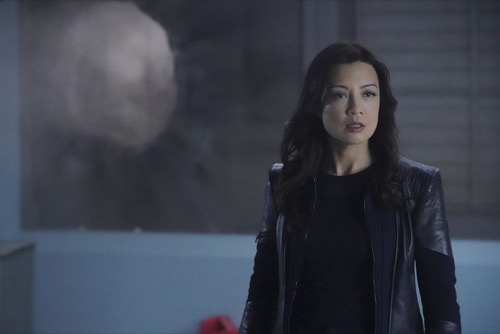 If the team is going to turn this one around, they’ll have to get creative, and maybe even a little out of this world, on the penultimate episode.”

Nathaniel Malick had a plan. He kidnapped Simmons. He also stole the Zephyr and its all because of his plan. His plan is to hunt down Fitz. Fitz it seems is still alive. He remains the one common variable in SHIELD defeating Nathan and so both he and Sibyl wants Fitz gone. Only they couldn’t find him because he went out of his way to hide his location. Simmons even helped him to make his escape and now she can’t remember. She implanted a chip into her brain. It took away her memories and it erased part of her personality as well. Simmons wasn’t at her usual self to plan an escape.

Not when Nathaniel was prepared to use others against her. He and his friend found Deke and they brought him to see Simmons. It turns out Nathaniel knew everything. He knew that Deke was Simmons’s grandson from the future and so he brought Deke into the room because he was threatening to torture him if Simmons didn’t reveal were Fitz is. Nathaniel thought his plan would work yet again, but he didn’t know about the chip. Simmons couldn’t remove the chip on her own and no one on board would know how to remove it either. The rest of her team was still on Earth. They knew about the Zephyr being stolen and they were looking for it.

The team had come back from Afterlife with their prisoners. They put the prisoners in a holding cell and one of the prisoners was Kora. Kora claimed she wanted to meet her sister. She found out about Daisy thanks to Sibyl and she didn’t know that her mother had been murdered. All Kora knows is that Nathaniel saved her life. He stopped her from killing herself. He convinced her that she had been caged for her whole life and that reveling in her powers was her path to true freedom. Kora also believes the only way forward is through killing. She told the SHIELD Agents that they should join her in “cleansing” the world of truly evil people.

Its why Kora wanted to join them. She thought that by joining them that she too can convince them of this grand scheme and she wanted her sister to join her. Kora told Daisy that in each timeline they joined together to fight. She said that Sibyl saw Daisy supporting her sister and so that pushed Daisy to go looking for the Zephyr. She did have a sister. She’s had a sister this whole time. Her sister was Simmons and Daisy went to go rescue her with Daniel and Mack’s help. They went looking without a plan because the only way to beat Sibyl is by having no plan. She couldn’t plan for what she couldn’t see.

Unfortunately, time was of the essence. Nathaniel found out about the chip in Simmons’s brain and he realized he couldn’t reach it. He had no way of operating the system used to fetching the chip. He was also pretty desperate by then and so he decided to go in and collect Simmons’s memories personally. There was a machine to help do just that onboard. Nathaniel and Simmons went digging through her memories and that meant all of her memories of Fitz were brought to the surface. Simmons was lucky in one sense because most of the memories she kept were of her falling in love with Fitz. And that’s what she remembered.

Simmons was knocked as she went down memory lane. Neither her body nor Nathaniel could protect itself and Deke was still in the room. Deke had been knocked out earlier once Nathaniel realized he wouldn’t crack under torture. So, Deke returned to his senses before anyone spotted it, and that gives him an opportunity. He was still figuring his next move as things took a turn for the worse back at the bunker. Kora used her powers to knock out their power supply and that freed her from the cell. It also lowered its internet shield wall. Sibyl got back into the system and she was now talking directly to Coulson and May.

Only May still had a card up her sleeve. May talked to Kora and Kora believes the timeline shouldn’t be preserved. Kora even said the first person they’d kill would be Grant Ward. Ward was a child at the time, but Kora reminded May that she’s killed children before and so May decided to tell Kora about her mother. Jiaying’s body was still at the bunker. May took Kora to see it and it naturally hurt Kora more than she thought it would. Kora thought her mother would heal. She didn’t and so Kora demanded the truth. She wanted to know who killed her. She thought it could be Daisy because of the signs on the body and May told her no. It wasn’t Daisy.

It was Nathaniel. Nathaniel killed Jiaying because Jiaying attacked him in order to protect Daisy. Jiaying was just keeping her daughter safe and at first, Kora grieved. May thought she could reason with Kora because of that grief. She tried speaking with Kora again and Kora refused to hear anything against Nathaniel. She still believed in his vision. She attacked May and she soon escaped. Kora went to the Zephyr where the rest of Nathaniel’s plan was revealed. Nathaniel had stolen the Zephyr because they used to send a signal to the Chronicoms. The Chronicoms answered it by sending a fleet and that fleet began killing SHIELD.

Nathaniel also didn’t find out about Fitz’s location. The chip did its job and Simmons ended up forgetting Fitz entirely.