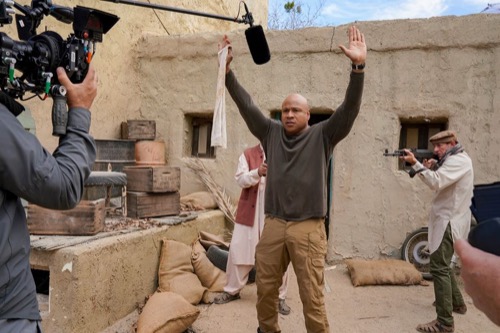 Make sure to bookmark this spot and come back from 10 PM – 11 PM ET for our NCIS Los Angeles recap. While you wait for our recap check out all our NCIS New Orleans news, spoilers, recaps & more, right here!

An incident took place in Afghanistan. The troops were checking on the aftermath of a drone strike when they found a body in a rumble and someone came up with the bright idea of posing with the body. The men took a picture with the corpse. It was disturbing and the incidents didn’t stop there. The man with the idea was now being accused of murder. Special Warfare Chief Petty Officer Thomas Argento was being accused of murder by two of his fellow Navy SEALs. It was his own team that turned against them and this struck a chord with Sam. He wanted to find the truth no matter what. He went to question the officers that made the accusation and unfortunately one of the men backed off.

After the one guy backed off, the second one was quick to follow. No one wanted to be alone as they made an accusation against Argento. Argento was well-connected in Washington. His wife was a senator’s cousin and his career had been helped by it. Argento also found out what his team members were doing behind his back. He found out about the investigation. He started texting them threatening messages and he even said he was going to send a kill squad. This was why the first guy backed out. Kensi and Deeks went to Kendricks’s apartment and the man had been so paranoid about the death squad that he pulled a gun on Deeks.

Deeks and Kensi had to talk him down. They calmed him and they found out why he pulled out of making an accusation. He was afraid for his life. He also did things with Argento in Afghanistan and so he was immunity from prosecution before he talked. Kendricks demanded immunity and so did the second guy Barr. Barr came back on when he saw Kendricks was willing to talk. Both men wanted immunity. They also said the information they had on Argento was huge. They apparently have evidence of him murdering civilians and so the team had to report this to Lt. Colonel MacKenzie.

MacKenzie had assigned them this case. She asked them to handle it with tact and that sort of blew up when Sam and Callen flew to Afghanistan in search of Argento. They had wanted information on Argento. They were going to ask witnesses but bringing Roundtree with them had been a mistake because he leaped before he looked and he got them all in trouble. The guys were forced to surrender their weapons. Sam and Callen were dealing with this problem as Kensi and Deeks spoke with MacKenzie. MacKenzie is refusing to offer the officers immunity. She didn’t want to hand that over until she got something credible from them.

Kensi and Deeks were also warned about their teammate’s decision to lose their tracker. Sam and Callen hadn’t wanted to be found by Argento and his men. Argento was supposed to check in with his team and he refused to do so because he’s hiding from the investigation. He knows that NCIS was in the area. He was hiding from them with what few men that are loyal to him and so that’s how Sam and Callen got in trouble. They were trying to stand under the radar. They went too far down in their search for finding a witness and they were almost handed over to the Taliban. They thankfully convinced their captors not to trade them.

They also finally spoke to the witness. Sam and Callen spoke to a young man named Jawan. Jawan had watched as Argento pulled out a knife and stabbed a sedated and unarmed man. Argento had done it for the story. He told his team that he couldn’t wait to tell everyone how he took down a guy with a hunting knife and so he made it sound like it had been a genuine fight when it wasn’t. It was murder. Argento went on to murder several people like that. He was a serial killer posing as a soldier and he needed to be stopped. Kensi and Deeks believed they have enough evidence to put him behind bars and so it was MacKenzie that told them about the issue.

There was an issue with the senator’s cousin. Argento’s cousin-in-law wants to protect him from the fallout of the investigation. The man was most likely worried about his own career and so he didn’t want to be connected to mass murder. Only Argento needed to be stopped. They tried to track him in Afghanistan after his team went dark and they soon found them moving on a building. It turns out Argento had found Sam and Callen. He wanted to kill them and anyone who may have found out the truth. He had hidden that from his team. His team didn’t know that they were Americans in the building they were attacking and so Sam and Callen had to think of a plan.

Sam managed to talk one of the Afghanis into allowing him to talk to the Americans. He identified himself and he revealed there were more Americans in the building. Sam got through to Argento’s team, but Argento himself had still wanted a bloodbath. He ordered his team to shoot up the building and his team was forced to turn against him. They didn’t want to be responsible for dead Americans. It seems that was their line in the sand and so the team sided with Sam. They saw to it that all the Americans were freed and safe. They also stayed quiet as Sam later put Argento under arrest.

Argento’s team had all turned against him. They would later give evidence of his misdeeds and so there was no burying what he did. Argento was a serial killer. He killed people for fun and he was finally going to be punished for it.

Although, Argento still believes that he’ll never be convicted.