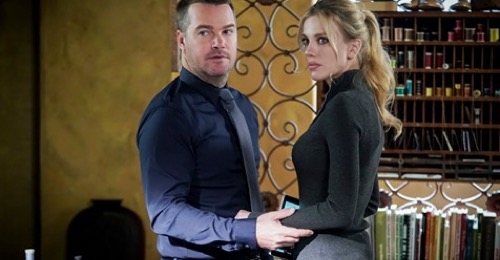 Callen and Sam were considering new recruits. They each were looking for something different and this meant they kept butting heads. They couldn’t agree on what’s best for the team. They both decided to table this discussion for another time and they split up. Sam went on a date with Katherine. Callen went to hang out at the bar. Callen lived above the bar and he promised to lock up after he left. He was just settling in for a long night by him when the unexpected happened. Callen was playing pool and then someone said his name.

It turns out it was Anna. Anna came out of hiding. She’s been doing work for the CIA and she wanted Callen’s assistance with the Cosmescus. She was looking for Darius Reznikov. He somehow survived the bunker and Anna said he was spotted at LAX airport. She wanted NCIS to help her locate him in the city. She also needed their help in staying under the radar because she still wanted for arrest in the US and not many people knew she was in town. The CIA may or may not know for instance. They know Anna’s mission. They just don’t know the lengths she’s willing to go.

Anna went to Callen. Callen went to Hetty and Hetty agreed to assist in any way she could. She knew hearing about the Cosemescus wasn’t great for Callen. Those people killed his mother and he was naturally going to be carrying a grudge. He also wanted to know how Darius was mixed up with them. Callen and his team tracked Darius from the airport. He was on the plane with a few other notable Russians and that didn’t seem like a coincidence. The team would have explored it further, but they got a lead on Darius.

They tracked him down a park. They ambushed him and they forced him to hand himself over. They then brought them to the boatshed where Anna wanted to question the suspect. Anna wanted to see if she could turn him. She thought if she talked to Darius that she could make him give up his cohorts and change sides. Anna also wanted to do this alone. Callen didn’t approve and so he brought up the fact the CIA wasn’t allowed to work on US soil. He told her she couldn’t question Darius and instead he did so.

Callen and the team found something. They found out Darius was working with Navarros and that the group was collecting women. Women who have gone missing all throughout Europe. It was clear the Navarros were kidnapping and even trafficking the women. They even stole women from a Cosemescus held area and that’s why Darius was in LA. Darius came to town looking for a woman that was kidnapped. It was his fiancé, Mina. Mina was kidnapped and she was going to be sold during an online auction.

Darius wanted to stop that. He got close enough to his enemies that he was on her trail and he learned about the auction. Darius even took on the name Cosemescu because he knew the name would strike fear to anyone who ever heard it. It also helped get Darius places where he wouldn’t normally go. Darius knew about the bad blood that came with the name and he was aware between his and Callen’s families. He just didn’t care. He wanted to find Mina and he was willing to accept help from NCIS.

Darius wanted to go with them to the auction. Callen didn’t trust him and so he turned it down. Only Hetty overruled him. Hetty agreed to front them the money they needed to get to the auction and in exchange, she demanded that Darius go with Callen and Sam. The boys were forced to take him along. They went to a party where the buyers were all lining up to view the women and they had to go in blind. Their signal was blocked. Eric and Nell could not see or hear anything in the building. They had to hack the signal that was being sent to the building.

He then crowd-sourced the signal. He used his friends from San Francisco to help find where the majority of the women were being held and then the boys meanwhile held a distraction at the party. They had Darius create a scene. They followed this up by attacking guards and freeing the women that were in the building. The boys were doing a great job until Callen was knocked out. He began hallucinating and it was lucky for him that one of the women revived him with smelling salts. And by the time he came to, most of the action was over at the house.

Mina had run like Darius like told her to. Darius was looking for her when the rest of the team cleared the building and Callen later came across Darius in which he saved the other man’s life. Darius was now a free man. He later agreed to defect and he was going to be resettled here in the states with Mina. And so Anna got what she wanted after all.

Kensi and Deeks had rescued the women at the warehouse and so the team saved everyone.

Callen also hid the fact that Anna stayed behind to spend time with him and for now that will be their little secret.