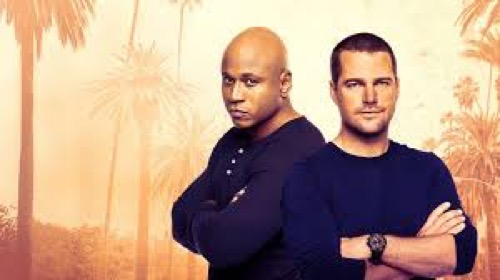 Marty is tending bar making jokes to Richard. When he turns around Richard is long gone and didn’t leave a tip. Bell shows up to give him the sad news that a joint mission by the Navy SEALs and several other government agencies has gone sideways. Fatima is involved and they do not know her whereabouts. She needs to get the team together.

They all arrive at headquarters. Sam and Callen have already headed to Egypt to try to rescue Fatima. The rest of the team talk. Marty tries to console Hen but she isn’t very optimistic about this whole situation.

Fatima is in the middle of nowhere in the mountains trying to radio for help. She comes to the clearing and sees two trucks and a bunch of men with guns. They hear her and begin to look for her. She runs off. They chase her and eventually catch her.

He touches base with Nate. He thinks she knows where Fatima will go if she’s on the ground. Nate isn’t so sure but he’s going to follow Hen’s lead.

Kensie and Marty meet up with Callen and Sam. They get briefed and head out. Callen and Sam pay a visit to a soldier who knows about the raid. He isn’t optimistic and hopes Fatima is tough.

Fatima is brought to a leader for the man. His name is Cobra as in G.I. Joe versus Cobra. She pretends to be a reporter who lost her way. When they begin to let their guard down she goes on the attack but loses out against them as there are too many.

Nell picks up on a broadcast via a radio station and determines Fatima is alive.

Sam and Callen bring their soldier buddy with them on the ground to come through the area where they believe Fatima is.

The team is contacted by Fatima‘s kidnappers and they want to ransom. They decide if they want to paint and how they should react well Sam and Callen are also add an impasse as to how to find her that is until their soldier friend shares that he has a secret informant.

Kensie and Marty assist Fatima‘s parents in making a ransom video. They promise to get her home safe.

Sam, Callen has to and their friend meets up with the source who tells them all about a man named Cobra. Callen offers himself as bait to get to Fatima. Their source who knows about Cobra will deliver him for a fee and then he will help Fatima and get free. The plan goes well with Sam moving in after to get them to safety. The blow the place up as they make their exit.

Fatima calls home, happy to tell her parents she is alive!