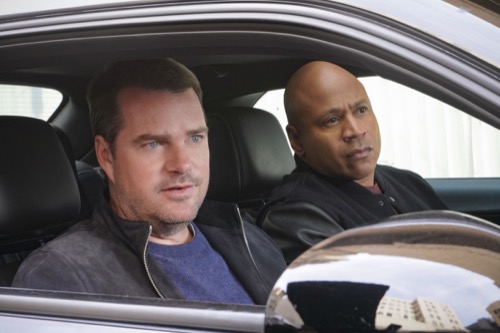 Two pilots are up in the air and their fighter jets when they come across some trouble. Callen meets with Anna for dinner. Anna talks about her situation and how it is going to take a long time to see her name and her records. He canceled her, telling her that he stands by her. He offers her help but she doesn’t want him to stick his neck out for her.

Marty reads a review for his restaurant. He needs to write a comment that matches such a glowing review. Kenzie gets involved but throws the simplest comment in there, working Marty up. Fatima interrupts them to tell them they have a case. They ask about her and she tells them she’s living with her family now. They didn’t have the best relationship before so it’s still stressful.

Nell updates the team on a case from the Pentagon. They have a missing male. The team thinks it’s weird, he has only been missing 3 hours. Nate heads over to the agency to find out what the missing man was working on but they won’t talk to him. Callen and Sam show up. The special agent lets them in.

When they enter the office they see nobody else there. The agent reveals that it is just her and the missing man Walter who works there. They are working on a special case involving UFOs and recent sightings. Eric is mesmerized.

They sit down with the agent and talk to her. She reveals that recently Walter has been hiding things from her and they had an argument. She shares that Walter is a firm believer in UFOs and he seemed to believe that she was there to cover it up.

Marty and Kenzie go through Walters’s homes, learning that he is a true believer with all of his books and maps. They see a camera outside and check his entertainment system. They may be able to pull video and find out what happened to Walter.

Sam and Callen find their first person of interest, a friend of Walters. They pull him in to talk to him. He talks about his and Walter’s meeting. Meanwhile, Marty and Kenzie realize the clocks are all off in Walter’s home.

Sam continues to question Walters’s friend who shares that there was a break-in at his home. Callen checks in on Anna. She plays it off that she isn’t up to much but she’s wearing a disguise and headed somewhere. She has two local café and set her sights in a Russian man who’s getting a drink at the bar.

Now and Fatima ends up getting into video footage that shows a suspicious fan and they might have Walter. The whole team heads there to scope the place out. Sam and Callen follow two guys to jump in an SUV. They head to an abandoned restaurant. Sam and Callen go in to find out what’s going on with their guns at the ready. Through a cracked door, they see Walter tied to a chair. Someone spots them and it begins in an altercation between all of them. They take out the bad guys and call for an ambulance.

Back at headquarters, the team talks to one of the captors. He appears to be Chinese intelligence who is trying to get information from Walter.

It appears the man that Anna has been tracking as her dad. She calls him on the phone while I’m watching him from a distance. He tells her how distraught he’s been. She tells him there’s something she has to do. Somebody beeps a car horn and he becomes aware that she’s near him.

Eric begins to freak out to the special agent who works with Walter. Walters other captors who are free are headed their way and he needs the team but they’re not responding fast enough. Walter’s colleague pulls a gun on Eric. She is extracting files of things that she wants to hide from the Pentagon. It appears those files show specs for all of the aircraft and she plans to sell it. Moments later, the team arrives to find Eric on the ground. Apparently she knocked him out and ran. Callen gets a call from Anna‘s dad that she’s in trouble. Down the street, Anna is trying to turn her self into the authorities.

Stuck, the team makes a deal with the captor they have in custody. They’ll keep his fiancée safe if he gives them the location of the agent and his fellow associates. He gives up the address and Marty and Kensie make the arrest.

Callen visits Anna in lock up. He doesn’t care anymore and he’s going to help her. An agent comes in and tells them that there is no warrant out for Anna’s arrest and he has no idea what’s going on.

Nell comforts Eric back at the office. She has a surprise for him, a picture of Area 51. The team goes to Marty’s bar after to hang out and enjoy a beer. Marty finds out that Anna was the one behind the beautiful review of his restaurant. Seconds later her dad comes in and the two are reunited.