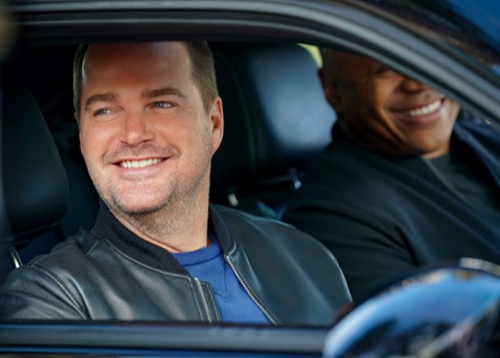 Callen is back. He’s back from vacation and it doesn’t seem to have fazed his partner. Sam acted like Callen’s first day back was nothing new. He didn’t pester Callen with questions about Anna or ask how she’s doing. Sam was fine with not knowing. It was Callen that felt the need to talk and it was a new occurrence for him. He usually talking about his private life. This time was different though because he wanted someone to tell and so he really wanted Sam to care about what he had to say. Only Sam was giving him the attention he wanted. He told Callen he was fine with not knowing and so Callen had to keep his news to himself.

They didn’t talk about what happened. They just fell back into work and they quickly caught a new case. NCIS was asked to investigate a potential arson case. It didn’t have any connection with NCIS and so it was the DOJ that asked the DOD for a favor. It turns out the house was an FBI safe house. Two FBI agents had been at the house at the time of the fire and they were there protecting Patricia Ruiz. She was a Venezuelan political activist. She couldn’t return home in fear of being made an example of and so she was being protected by the Americans. They even protected her when the fire broke out. They had moved her to the second location.

The agent sent to work with NCIS was keeping mum about where Patricia is. FBI Special Agent Audrey Rush wasn’t in a hurry to say this was arson or that her asset was compromised and if anything she was downplaying what happened. Rush was fresh off of having a baby. She was pumping her breast milk at the office and making both Kensi and Fatima very uncomfortable, but it all could be a ruse to get them to drop the real issue. The women couldn’t talk about Patricia or why she was being protected. They couldn’t help her by keeping an eye on her and so NCIS had to work around Agent Rush.

They asked to see her baby pictures. They used that ruse to keep her busy and all the while Kensi put a tracking device under Rush’s car. They wanted to use the device to track down Patricia. She had been very vocal against the corrupt government of Venezuela and there’s no telling who from the regime may have found her and made a move against her. Sam and Callen went to the location they later got from the tracker. They sat on a house in which they believed Patricia was being held and they were there when Rush spotted them. Rush figured out what they were doing. She accused them of putting Patricia at risk and she also guessed correctly how they found her.

She called the whole tracker thing cruel. She couldn’t believe they used pictures of her baby to get to her and she was telling the guys off when they heard shouts from inside the house. All three rushed to Patricia’s defense. They spotted her as she was being attacked and they managed to frighten off the men that were hurting her. Sam and Callen had tried to follow the men except the perps got away. Sam and Callen went back to the house and they found Patricia safe and well. She hadn’t been too hurt. Patricia was well enough to be transported again and this time it was the team that was calling the shots.

They tried to let the FBI handle it. Patricia was almost killed on their watch and so NCIS took control. They had Patricia taken to the boat shed. They also looked into how her safety was compromised because the perps managed to track her down to at least two safe houses and that was way too lucky on their part. Kensi and Fatima talked to Rush about what she knew. She broke the train of command in order to give them answers and she was doing that while Sam and Callen discussed the case. They questioned if the guys that recently attacked Patricia were the same men as before. It did seem odd to them that someone would start a fire first time and tried to kill her personally the second.

The guys were in the middle of their conversation when they heard about a second fire. The fire seems to have been started by the same man as before and yet Patricia was nowhere near it. It also wasn’t an FBI safe house. This second fire had nothing to do with the FBI nor has it ever involved someone from the FBI and so the team was looking for an arsonist. Someone who likes to set fires. This arsonist also called 911 almost right away as the fire started and so this person was a conscientious arsonist. This arsonist has been distracting the team with fires. The team pushed that to the side to focus on Patricia and so they later searched nearby faces and they ran them past Patricia.

They had her identify anyone who looked familiar. She later identified Miguel Perez as someone she saw while she was being transported and he turns out to be someone from the Venezuelan Armed Forces. He arrived several army buddies from Venezuela a couple of days ago. They’ve been looking for Patricia and its really easy because over two hundred people from the FBI knew where she was at any given time. Rush told Kensi and Fatima how the FBI has been tied up in bureaucracy. She gave a list of names who knew about Patricia and it was three pages long. And to make things worse, Rush’s boss FBI Special Agent Munger had found out NCIS was trying to take on the case.

He became upset because he said this was FBI business. He didn’t care what the DOJ or the DOD said about it and so he took Patricia. He took her to a place the team didn’t know about and so they couldn’t track him, but they did track Miguel and his people. They found them and they approached. They claimed to be friends of the cause. They got Miguel to meet with them and they used that opportunity to arrest him as well as his friends. As it happens, Miguel and his people have nothing to do with the fires. The fires were set by a firefighter with a hero complex and so it had nothing to do with Patricia.

Patricia was later granted asylum to the United States. She’s safe and the FBI will probably reconsider how many people they tell about her.

And someone finally got around to asking Callen about his vacation but it was Kensi not Sam and Sam left the party early go hang out with his new girlfriend.