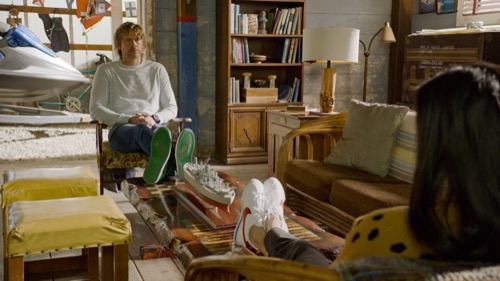 A young woman is doing stand up on stage at a club. She sees a face in the crowd and suddenly tells the audience her time is up. She leaves the stage, the man comes near her in the to get into a fight. She breaks a chair over his head before escaping.

Deeks is upset because his bar has been given a bad review. Eric tries to talk him down. Deeks wants Eric to hack the reviewer. Meanwhile, Hanna and Callen talk about how Callen is looking for a new place to live. Fatima and Kenzie are working out. Kenzie tells Fatima that she really needs to do other things besides work or she’s going to burn her self out. They get a call for a case.

Eric updates Kenzie and Fatima about an agent by the last name of Forbes, who is missing that is working in Los Angeles on a top-secret case. He is either on the run after selling information or he’s been kidnapped.

Meanwhile, Hannah and Callen arrive at the rental property for the agent. They see a young girl making her way out of the side of the house with the alarm going off. She tells them that she is also an agent. The agent Moretti tells them how she was almost killed last night by one of their enemies and came by to see if Forbes was OK. They tell her that he is missing.

Fatima and Kenzie head to a nearby church after catching a lead. They speak to one of the employees outside who tells them that Forbes comes to the church every Saturday for AA meetings.

Moretti is brought to Deeks who questioned her about forms and anything else she might know.

After some more digging Hannah and Callen think maybe Forbes went on a trip by his own will.

Deeks continues to question Moretti who tells him that Forbes is a standup guy. He always helped her out and she feels bad that he was going through a divorce because he has enough stress. Deeks tells her that Forbes was never married. He’s been lying to her.

Hannah and Callen check in with Eric who tells them that he got a license plate from the scene where Moretti was attacked. They head out to try and locate the person of interest who is a plumber. Meanwhile, Kenzie and Fatima track down a woman who is also of interest. They take her down to headquarters. Hannah and Callen get their plumber who attempted to run.

After checking with one another the team determines that Forbes has stolen something from somebody dangerous. Eric manages to get footage of areas near Forbes’ rental. The woman Fatima and Kenzie previously interviewed as seen on video. After they talk to her they realize that she helps women in dangerous situations, and that’s why Forbes reached out to her because he had an informant that needed to disappear.

Fatima and Kenzie arrive at the address that the woman gave them where the female is being hidden. After the female lets them in a mail comes barreling through the door, Fatima takes him out but Hannah arrives just in time. While Kenzie tries to get the female out of the back another male comes out of nowhere. The rest of the team takes him out too.

Fatima surprises Kenzie with tickets to the Eagles. Kenzie’s been trying to get her to go out. Eric heads to Deeks bar. They talk about that review. Deeks feeling better.

Hanna tells Callen that even though he’s been giving him a hard time about buying a house he’s just glad that he is planning his future.