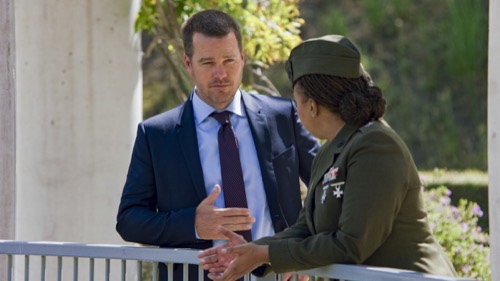 Former Chief Petty Officer Thomas Argento is to have his day in court. He used to be a naval officer. Then he killed an innocent and unarmed man while he was deployed. He even tried to cover up his crime. He lied and he forced his whole unit to lie about it as well. Argento did whatever he wanted in the Middle East. He was flying high until one day he was found out. He was arrested and now it’s time for his trial. It’s been a long time coming. Sam and Callen brought him down months ago and they couldn’t wait to testify against him now. It was not every day they got to be at a war criminal’s trial. They were going to give testimony alongside Argento’s former unit and the whole nation is watching.

Argento’s trial has caught media attention. The president was texting about it and everyone wanted to know what was going to happen to this man. This monster. Argento killed an unarmed man who was not an enemy combatant and afterward he forced his unit to pose with him in a photo with the body. Argento instructed his men to turn off their body cams. The only evidence they have of this encounter was the photo itself and the testimony of four of the soldiers. Petty Officer Malcolm Kendricks was the first to give testimony. He was asked to recall the exact moment he witnessed Argento stabbed an unarmed man and instead he changed his testimony.

He changed his testimony while he was on the stand. Kendricks claimed that he killed the unarmed man. He said it wasn’t Argento and that he lied earlier when he claimed differently. His new allegations had shocked the prosecution. The prosecutor was so stunned that she had genuinely needed a moment to recollect herself and even Sam and Callen didn’t know what happened. The guys, like everyone else, wanted to know what was really going on. They were the first to question Argento’s unit and the unit had all said the same thing. They all said it was Argento. Sam and Callen had spoken with Kendricks and he didn’t tell them anything different.

Therefore, this new claim needed time to be investigated. The prosecutor asked the judge for that time and he gave her less than a day. She couldn’t argue against it. She had to make do with what she was given and so she turned to Sam and Callen for help. They believe that someone got to Kendricks. Kendricks’s family must have been threatened somehow by someone close to Argento and so NCIS went to work investigating this new angle. Fatima looked into everyone who visited Argento in prison. His wife, his siblings, and also his parents had never visited him. They were all in the media about how Argento was the victim of a witch hunt and weirdly none of them visited him.

It didn’t make sense. No one related to Argento visited him while he was in the brig and so it was just strangers. Random strangers. Fatima was looking into everyone under Nelle’s watchful eye and both Kensi and Deeks went to Kendricks’s home. They wanted to check on his family to see everything was okay. His wife Monica was fine and so were their two children. Monica didn’t even know that her husband was planning on changing his testimony much less claim it was him that killed the Taliban cleric and so she had no idea what was going on. Her husband hadn’t talked to her about it.

Kendricks also wasn’t speaking to NCIS. He fobbed off every opportunity to speak to Sam and so the team still didn’t know what was going on. They also were missing a second witness. Moffet had disappeared and his friends didn’t know where he was. They suspected he might have been shacked up an ex. They went looking for him and in the meantime, Fatima told the team what she found. She found that every person who visited Argento is prison was a courier in the city. They were literally messengers and so that begs the question who was sending him messages. Kensi and Deeks went to the courier office. They got a name and it turned out to be fake.

The name/person didn’t exist. The law firm they claimed to work at also didn’t exist and so their best bet in finding out what’s going on was Moffet. Agent Rountree tracked him back to his ex-wife’s place. He knocked on the door and the moment Moffet saw it was him – he tried to run. He ran out of the backyard and jumped the fence right into the pool. Rountree was able to catch up to him after that. He stopped Moffet and he questioned him. He wanted to know why Moffet didn’t show up at court. Is Moffet scared? Was he threatened or told about a threat? Moffet was the only one who could give them clarity.

Moffet told Rountree the truth. He said he received pictures of his son from outside of the house and these pictures go back months. It was just pictured at first. Then a night before the trial he was told not to show his face or else something was going to happen to his son. Moffet was so scared that he told Kendricks. Kendricks changed his story not to protect his own family, but to protect Moffet’s family and so the team finally figured out what was going on. Their next step was finding the person making the threats. Odds are it’s the same person paying for the courier service and so the team went back to the office base for the service.

They met a druggie by the name of Martin. Martin was so confused that they had to ask the same question repeatedly before it sank in and so Martin eventually told them that he had footage of this man. He was Former Naval Captain Parker Cole. He was the father of Michael Cole and the younger man was once on Argento’s team. It makes no sense why Parker who goes to such lengths to get Argento off. The team couldn’t understand it and at the same time, they had to protect the case. Kendricks almost destroyed everything with that stunt of his. The team needed Moffet and their third soldier to be perfect if they meant to keep Argento imprisoned.

The team had evidence enough to witness tampering. They were going to arrest Parker Cole and they were going to get Moffet to court. They were transporting Moffet when Michael Cole appeared with a gun. Michael thought he had to kill Moffet to stop him and thankfully it was Sam who stopped him. Sam understood what it was like to deal with pressure from his father. He knows that Michael didn’t mean to hurt anyone. He had the younger man arrested and then he got Moffet to court. Moffet later gave telling testimony against Argento. This plus Kendricks’s testimony being thrown out had helped the prosecution.

There is now little chance that Argento will be getting off.

The team did their job and they were feeling quite proud of the work they did.