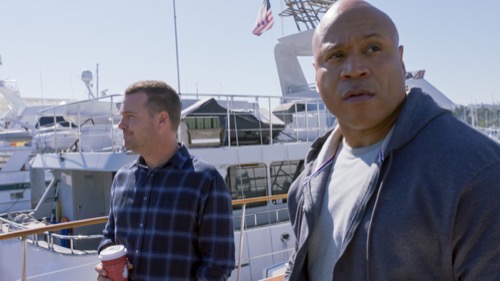 Tonight on CBS NCIS: Los Angeles returns with an all-new Sunday, December 13, 2020, season 12 episode 6 called, “If The Fates Allow” and we have your weekly NCIS: Los Angeles recap below. On tonight’s NCIS Los Angeles season 12 episode 6, as per the CBS synopsis, “Before Christmas, Hetty assigns Callen the case of his former foster brother and his wife, who, upon reentry into the U.S., are framed for smuggling drugs across the border; Deeks is struggling with losing his job at NCIS.”

LAPD canceled all liaisons with other departments. It seems like a random decision because there was no forewarning whatsoever and it left Deeks in the cold. Deeks can no longer work with NCIS. He couldn’t even join NCIS. He was far too old to be considered for a federal position and so there was no chance for him in starting over. He was either a liaison or he was nothing. He was currently nothing right now because Nell tried to keep him on the team and nothing she said nor did could change the outcome. Deeks is out. He’s having a hard time dealing with the fact he’s out and his wife couldn’t cheer him up. There was someone hunting Kensi. She was in danger and that was a focus for the team, but Deeks couldn’t do anything about it.

The most he could do was keep an eye on her when she was with him. Deeks and Kensi were going back and forth over whether to put their money into infertility treatments or to buy a house and they’re both leaning towards a house. It wasn’t the right time to bring a child into the world. 2020 was a dumpster fire of a year and there was also that guy that was hunting Kensi. Kensi was at first leaning towards infertility treatments until her life was threatened. She now realizes that she wants to make her husband happy and so she agreed to look at houses. They even found a place that was within price range. Kensi was happy with it and she thought Deeks would be too. Only Deeks was still obsessing about no longer being a part of the team.

Deeks could barely look at their dream home because he was in such a runt. He also couldn’t stop mentioning the person that was threatening his wife because he felt he could do more to protect her if he was still working at NCIS and, once Kensi realized there was nothing she could do to help Deeks get pass this, she went in to work. Kensi needed to take her mind off her troubles. If her husband couldn’t help her, then she at least knew that Nell would. Nell did have a case. She was given this case by Hetty and initially she didn’t know why she was given this. It was a drug bust. Raymond Lewis and his wife were found with over thirty pounds of crystal meth by a border patrol guard. This guard pulled over this black couple because he was totally racially profiling them.

It was only by luck that it turned into something else. It also didn’t look good for Raymond because he has a history and this history involves Callen. Callen used to be Raymond’s foster brother. He spotted Raymond breaking the law one day and he turned him in. Raymond went to prison where he was in and out for a while before he got himself straight. He later met Paula. Paula became sick with COPD and their insurance wasn’t covering all the expenses. The couple ended up going to Mexico for cheaper treatment. She was given oxygen tanks while they were there and these oxygen tanks were later proven to be filled with crystal meth. Paula was so depleted of oxygen that she had to be rushed to the hospital while her husband was being arrested.

However, both Paula and Raymond said they had nothing to do with the crystal meth. They have no idea how it got there and so Hetty put Callen on the case. Callen was reunited with his old foster brother. He didn’t tell Raymond who he was because over thirty years has passed and they’ve both moved on, but for some reason, Callen believed Raymond’s story. Raymond hasn’t been in trouble in twenty years. It seems illogical that he would suddenly fall back on crime now and so he and the team were going to help Raymond. Callen also came clean. He revealed he was his old foster brother and the two of them caught up. Raymond told Callen that he changed his life after he started going to church because that’s where he met Paula. She sang at the choir and he fell in love with her.

Raymond and Paula now need help. They talked to the team about their last visit to the hospital in Mexico and Raymond said that he recognized a nurse there. He said he saw that nurse doctor at a hospital in LA. Raymond told the team which hospital in LA. Callen stayed with Raymond while Kensi and Sam went to the hospital. Sam stayed outside. Kensi went in pretending to be a patient and she was about to talk to a doctor when Sam alerted her. He spotted a nurse going into the hospital with a gun. This nurse didn’t take long before he pulled out that gun and tried to shoot Dr. Soto. Kensi had been forced to protect her. She got the doctor out of sight and together the team tried to figure out what was going on. And it was hard to do because ops was down.

Eric had come back to town. He came back after working with Department of Defense on a multibillionaire contact and it was supposed to upgrade NCIS’s computer system. Only Eric ended up shutting the whole thing down. He was back less than a hour when he inadvertently caused everything to collapse and started to freak out about it. He even tried to blame Fatima. He wondered what she’s been doing to Ops that the computer system couldn’t handle the upgrade and so Nell had to keep the two from fighting. She also worked with them to help put Ops to right. Eric later realized that the safety measures that the computer system had in place was why it resisted the upgrade at first and so he course corrected.

Ops was soon back online. It found out who the nurse with the gun was and why he was after Dr. Soto. Soto had been helping the smuggling ring. She didn’t know why the nurse turned on and so Ops could answer that. It turns out the nurse was Diego Huerta. He accidentally lost sight of the drugs because they had been given to Paula by accident and so he tried following the couple from Mexico. He saw them get pulled over Border Patrol. He also saw that they had been released and were speaking to federal agents. The nurse, or truly the person he works for, decided that too had been exposed and was now killing people to keep them quiet. Huerta tried to kill the doctor. He missed and so now he has to kill the Lewis couple.

Callen was still with his foster brother. He was alerted that Huerta was on his way and so he did his best to protect his brother and his wife. Callen doesn’t like speaking about the past, but he had cared for Raymond who had been a big brother to him and now he doesn’t want to lose him again after they’ve been reunited. Callen took out the men that came with Huerta. He then found Huerta thanks to new computer system at Ops and he came just in time to watch Raymond knock out Huerta. He knocked him out with an oxygen tank. A real one this time and so he and Callen laughed about it.

Callen then remembered what really happened all those years ago. He hadn’t called the cops on anyone. His foster brother had beaten up Callen’s old bully and the cops got called on him. Callen always blamed himself for what happened because Raymond got sent to juvie. He then went from juvie to jail as he got into even more trouble and so Callen apologized to Ray for setting things in motion. Only Raymond said there was nothing to apologize for. He made his own decisions and here he is married to an angel after everything.

Callen was glad for Raymond. He was also glad to spent time with his team who became his new family and that family was at different places in their lives. Deeks was thinking of selling his bar to get the dream home for him and Kensi. The two were in the building when Hetty called. Hetty wanted to congratulate them because Deeks has been accepted into the NCIS Academy. She may have pulled some strings to get him that only now Deeks gets to be an agent and the team gets to stay together.