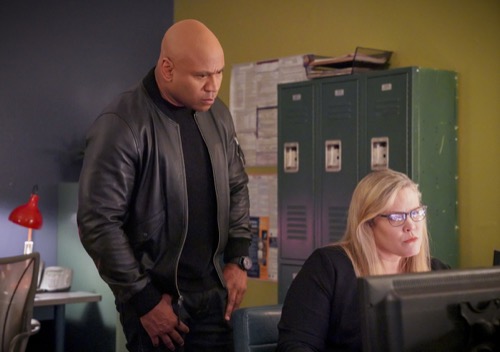 Make sure to bookmark this spot and come back from 10 PM – 11 PM ET for our NCIS Los Angeles recap. While you wait for our recap check out all our NCIS New Orleans news, spoilers, recaps & more, right here!

CIA Officer Veronica Stephens was attacked before her morning workout. She had gotten out of her car and was putting herself together when a guy came at her with a syringe. Veronica fought him off before she got back into her car and drove away, but she later ended up going to NCIS. It seems she had told Hetty that she thinks this attack had something to do with a favor the CIA did for her. Hetty had wanted something in exchange for helping them out in Cuba and she asked that the CIA take in a doctor that was in trouble.

The doctor’s name is Dr. Joseph Olongo. He was a Nigerian Agriculture Engineer and Veronica had helped him to get to the states, but then Olonga disappeared. He vanished into thin air and Veronica has been looking for him ever since. She was still looking for him when someone attacked. She thought those two things were connected so she went to Hetty and Hetty turned her over to Sam and Callen. The boys weren’t happy with seeing Veronica again. They thought the CIA has enough problems as it is with that mole they never uncovered and so the boys thought this attack was personal.

They think whoever outed Veronica as CIA last year were the same people that attacked her now. They also told Veronica to stay at the boat shed because the bad guys knew her routine and as far as they knew she might have brought them straight to boat shed. The boys told Veronica to stay put while they investigate what’s really going on. They tried to reach out to Hetty. She was gone and she wasn’t answering her phone. Hetty had apparently collected Ahkos’s remains and went to Greece so that she could put him to rest. And with Hetty out of the way, the team was left floundering.

Sam and Callen couldn’t find the doctor. Neither could Nell and Kensi and Deeks couldn’t find any evidence of the attack on Veronica. The same Veronica that left the boat shed at the first opportunity. There’s no telling where she went. Which wasn’t fair on the team because they were helping her and now she was just getting in the way. Veronica had at least left the boat shed of her volition. She wasn’t forced out and so Sam questioned whether or not they were being played. This wouldn’t be the first time someone used NCIS for their own purposes.

Sam could think of several women who’ve duped Callen. Callen was also quick to believe Veronica’s story and so that was Sam’s first warning that this case might be iffy. The second was the lack of evidence Kensi and Deeks found. They went to the parking lot where this attack took place and they found nothing there proving Veronica’s story. They didn’t even come across the things she supposedly left behind in her panic to drive away. The team had nothing with Veronica and yet they found evidence of the doctor being snuck out of his hotel.

The doctor disappeared the same time a waiter was moving his cart. The doctor could have easily been hidden or stashed under that cart and the boys were going through security footage when surprisingly Veronica showed up on the live feed. She came to the hotel looking for the doctor and the boys were able to detain her. They later brought her back to the boatshed for questioning. They needed answers and she was the only one available with Hetty out of town. Callen tried to crack her and unfortunately, he fell into a game of chicken with Veronica.

Neither of them was willing to crack or reveal their sources. They tried to ask her about the man that Olonga was supposedly meeting with at the hotel and she claimed not to know who they were talking about. She denied all knowledge of Peter Sanders even if he did belong to the Department of Agriculture and used to work with Olonga in Nigeria. Veronica had claimed she didn’t know much about farmers and so the team left her handcuffed at the boat shed as they searched for answers elsewhere.

They found the waiter. They went to his house to question him and he snuck out the back, but he didn’t make it far because he was turned into a road bump by a garbage truck. Thereby making their one lead very dead. The team was left without options afterward and so they tried searching through the dead man’s things. They searched his home before they searched his van. It was in the van they found Sanders. He had been dismembered and it seems whatever killed him had first been injected into his system.

Sort of like how Veronica claimed her attacker came at her with a syringe. She was alive while Olonga was missing and Sanders was found murdered. The team told Veronica that she was free to go if she wanted to take her chances by herself, but she chose to stay and work with NCIS. Veronica could be the last person alive that was involved in whatever and so she knew she needed help. She was also willing to tell them the truth in exchange for said help. Veronica later brought Sam and Callen to a warehouse

This warehouse used to hold automotive farming equipment. Things that could basically be making farming better and so Veronica didn’t think it was worth much. However, the warehouse had been emptied out. There was nothing there left and the team now believes the thieves gain access when they kidnapped Sanders. They must have gone after Sanders when they failed to grab Veronica. Veronica wanted to do something only there wasn’t much they could do with an empty warehouse. They had to check other avenues and luckily their dead hitman had left behind a laptop.

It was heavily encrypted, but Eric was able to crack it and it led them to an office building that should be empty. The team soon figured out their bad guys were using the building to house the machinery as well as the good doctor and so they smoke out their baddies. They got someone on the roof and he used released a smoke bomb into their ventilation system. They then waited as the smoke drove someone out of the building and they knocked him out before they infiltrated the building.

The team went in to go find the doctor and they later found him all tied up. His kidnappers tried to flee, but the team was able to get them all and they recovered the stolen machinery as well as saved the doctor’s life.

Veronica later thanked the team for their help but she’s not ready to be anyone’s best bud just yet.