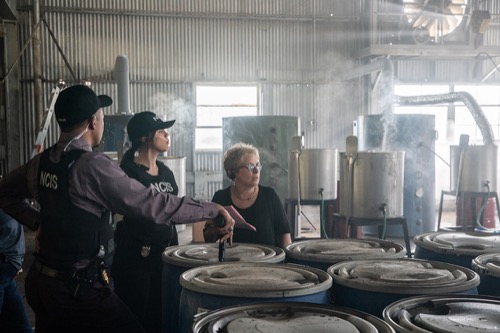 Some skateboarders found a body. They were over by several abandoned buildings when one skateboarder took a risk on his board and he fell into a trashcan. He was trying to get himself out of it when he saw the body. The body belonged to Petty Officer Brayden Murphy. He was murdered and his body was clearly dumped. Murphy was killed by a single gunshot wound to the chest. The team needed to trace the wound back to the killer and they had to do so without Sebastian. Sebastian left to go be with his mother. His mother was getting her appendix removed and Sebastian wanted to be there for her. He was off with his mom at the hospital while the team broke the news to Murphy’s wife.

The wife lived in New Orleans. Sarah was in the area taking care of her sick father and she also doing her best to look after his farm. The farm was doing so well. The wife was stressed and she later said Murphy was stressed as well. The situation they were in was difficult. Sarah and Murphy weren’t even living together. He was stationed elsewhere and he made several trips to come out and see her. He would sometimes make the trips in a day. Sarah said it had been hard on him and so the team looked into it. They found some odd payments made on the farm. The farm was heading to foreclosure when someone began paying nine thousand dollars a day on it.

The team questioned where the couple was getting that kind of money. They first suspected that Murphy was stealing from the Navy to help his wife and so Patton found something for them. He found it illegal. The team, therefore, couldn’t use it and they had to use their backup plan. They retraced Murphy’s steps. They took the same road he did and they found a car accident. They initially assumed the car accident was their original crime. Only it wasn’t. The car accident had a different victim. The driver was dead in the car. He was later identified as Jace Lennon and he had a long rap sheet.

There were also footprints around the car. The team believed that Murphy may have come across the crime scene and he wasn’t alone. There were second footprints around the car. The team ran an analysis of the vehicle plus the nearby area. They were able to connect it to Clay Bledsoe. He was another one with a record and he was also Sarah’s brother. She failed to mention it when she talked to NCIS. The team believed she knew what was going on with the secret payments and so they later followed her. They followed her as she delivered a bag of drugs to some strange man. The team arrested her as well as her buyer.

Sarah began talking once she was in custody. She told them the whole story. She told them how her brother was driving around one day when he came across an accident and he found a bag of money. He tried to use that money to pay off the farm. His sister found about it and she informed her husband. Murphy made Clay take him to the accident. They tried to find who the man was because they were going to return the money and they found a phone. Murphy called up the dead man’s last contact. He was going to return the money and so he didn’t know about the drugs. Clay kept that from Murphy and his sister. She didn’t find out about the bag of heroin until her husband was dead and she was told Clay’s life was in danger.

Sarah has been trying to make things right ever since. The team later used her to call the drug dealers and they traced the call. They found out that the drug dealers were back at Sarah’s house. They went there and unfortunately, they just missed them. The drug dealers had left. They left after they wrecked the house and tied up the old man’s nurse. The team was left with nothing. Clay was still being held hostage and so the team searched the house for evidence. The only thing they found was some plants. The plants were poppy flowers and they were a clue. Patton also found security cameras of a black vehicle heading to a farm. He ran the license plate and it belonged to Peter Shaw.

Shaw was connected to a bombing back in 2015 at the Marine Relief Gala. He was supposedly in on it with Sasha Broussard who ran the Broussard Syndicate back in the day and she was caught while he wasn’t. Pride went to prison to visit Broussard. He asked her about Peter Shaw and the man they had in custody. She recognized both men. She said she worked with Pete and that Blaine had worked with Peter for her cousin Luke Doucet. He was their suspected drug dealer. Pride tried to squeeze Broussard for more information as if she owned a large plot of land where heroin could be grown. And she was willing to give him that information for a prize.

Broussard demanded a deal before she helped. She had tied Pride’s hands and so he made a deal. He got a location out of it. He found out where this poppy farm was. He and his team moved on the farm and this received additional help because Sebastian came back. His mother had a new therapist. She told him her co-dependence on Sebastian wasn’t healthy and so now Sebastian os receiving space from his mom. It came at just the right moment too. The team was all together when they took on the drug dealers. They also had the DEA for extra help when the gunfight got out of control and by working together they took down Doucet.

The team even returned Clay to his sister alive. Clay later apologized to his sister for what happened to Murphy. He didn’t mean for it to happen and his sister wasn’t sure if she could forgive him. But Clay was going to have to testify against Doucet and his men. His sister meanwhile has to go back to taking care of their dying father.

Khoury later handed over the signed divorce papers to Ryan. He’s moved on. He was dating someone else and so Khoury realized she needed to move on as well.

And sadly Broussard was going to get released early, but she feels like she has some unfinished business with Pride and so she’s about to become a problem.