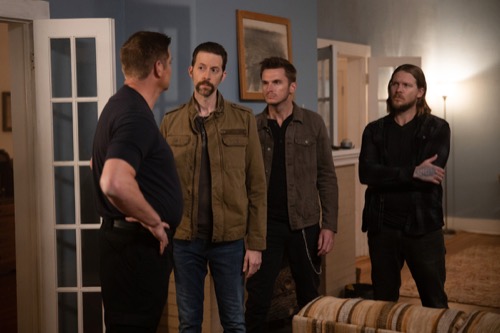 Sebastian is undercover. He was working alongside white nationalists because he wanted to find out if this group that calls itself American Corps was responsible for the death of a Naval Aviation Mechanic. This mechanic’s name was Jeff Tegan. Tegan was approached by a group that wanted him to work for them and he had turned down their offer. It was after he turned down their offer that he began getting threats. He was later found beaten to death and the team suspected it was these white nationalists. And so they sent in Sebastian.

It usually would have been Pride. Only Pride was burned by that community after he spent some time undercover with a militia and so it had to be Sebastian. Sebastian managed to earn some cred when he “killed” someone. He pretended to kill one of their own and not only did it give him an in with them, but his victim later got to be questioned by the team. The team asked the guy about the RAC. They found out they act as a militia and that they believe in someone named the Commander. The Commander was also shrouded in secrecy.

No one except the inner circle knew who this Commander was. Sebastian was their best bet at getting information on the guy and so the team maintained his cover. They let everyone believe Sebastian killed someone for the cause. They even hid his background. Sebastian was known as a former CSI who snapped and attacked his supervisor just because the man wasn’t white. He was able to play up that angle. He got several members of the RAC to trust him and so he eventually met the Commander.

The Commander identified himself as Jim Keene. Sebastian had gotten a name and he needed to let his team know that he was okay. He just had to stay off the grid while he was at it. Sebastian helped the RCA to cover up a dead body and in turn, he made sure this body was found by his own people. He wrote “Pride” on the body in acid. He also made sure one fingerprint was still usable and so the team identified the victim as Byron Landis. He was a courthouse guard. The team had no idea what he part he played and so Sebastian tried to help with that as well.

Sebastian questioned the Commander. He asked who the dead guy was and Keene told him that he had made the man an offer that the guy rejected. That was apparently enough for the Commander to kill him. Sebastian was doing his best to get information on the Commander and all the while the team found out about Keene. The connected Keene with the members of the RCA they identified. Patton told the others that Keene was a former Army Ranger. He killed one of his own men in battle and tried to cover it up.

Keene was found out. He served three years for manslaughter and since then he’s taken part in bombings. Keene was planning something bigger now. He didn’t trust his men enough to tell them the full plan and so Sebastian didn’t have enough to tell his team. He tried to make secretive drops in which he tells them what happens. Sebastian couldn’t do that anymore as the things began to heat up with the white nationalists and so his team had to “find” him. They found him and they made this big scene. And they got close enough to Sebastian for him to pass on information.

Pride asked Sebastian if he wanted to be taken out of there. But Sebastian wanted to keep his cover with the RAC and so NCIS just “missed” him. Sebastian was still trusted by the Commander. He later asked Keene for a bigger role and Keene gave it to him. He entrusted Sebastian with the role of a sniper. He also teamed Sebastian with someone that didn’t trust him and so that made things difficult for Sebastian. He now has to act without being seen. And Sebastian had even more information to give to his team.

Sebastian found out Keene was going to nitrogen in a terrorist attack on the military. It seems the Commander resented being thrown out of the military and so now he wants vengeance. Keene told his people that the military needed to stop bringing in women and people of color. He thought by killing them by the hundreds that his lesson would have gotten out and the military would be handed back to the “right” people. And so he was clearly delusional yet Sebastian did everything he could to undermine him.

Sebastian’s team, on the other hand, had had to investigate things on their own. They found out all they could about Keene and the sniper that they killed. They found out the sniper had been near a military recruitment fair. So, they went there looking for Sebastian and he spotted them first. Sebastian has known out the guy he was with and he used a burner cell to contact Pride. Sebastian then told Pride that the snipers were supposed to herd people into this one building where they would all be poisoned to death by the nitrogen.

Sebastian tried to warn his team in time. However, he had been forced to kill a RAC member and the ensuring panic drove everyone inside. Like planned and so Pride went into the building. He had to decide between shooting Keene or a window to allow air and he chose the window, but thankfully Khoury was there and she chose Keene.

Sebastian did a great job undercover. He saved the day and he later learned he had made it on the REACT team which were like the NCIS’s SWAT team.