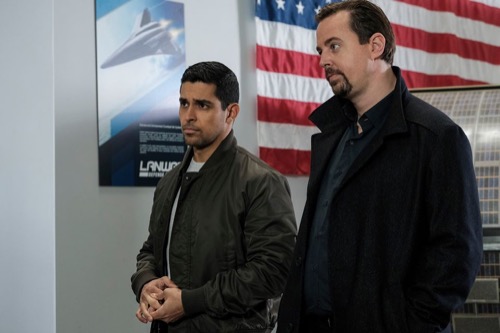 Tonight on CBS NCIS returns with an all-new Tuesday, January 21, 2019, season 17 episode 13 called, “Flight Plan,” and we have your weekly NCIS recap below. On tonight’s NCIS season 17 episode 123, “Sound Off” as per the CBS synopsis, “The NCIS team investigates an F-18 crash and the subsequent disappearance of the pilot who operated the aircraft. Also, McGee reluctantly discusses a very personal decision with his teammates.”

Palmer is looking for a new medical assistant. He’s been putting it off since Ducky’s retirement and the extra workload was beginning to get to him. Palmer was doing the work of two men. He was barely getting any sleep and it was slowing him down in the field. Everyone had noticed that he was off his game as they worked their latest case. They were investigating the murder of Retired Gunnery Sergeant Daniel Backer and the man had been blown up. There were pieces of him all over the place. It made it harder for someone like Palmer to perform an autopsy on so many pieces and yet he tried to keep up with the rest of the team.

Palmer determined that Backer was dead before he blew up. He said the blood flow had seemingly stopped before the explosion and that was his proof that Backer had been dead for several hours. Even if the explosion did make everything harder. Palmer barely had all the pieces and the team was trying to figure out what happened. Backer was a drone testing field. He would have known better than to be in that area and so his body must have been moved to that location postmortem. There was also the woman manning the drone.

The woman was later identified as Marine Staff Sergeant Diana Murphy. Murphy ignored a direct order to not fire her drone and she did it anyway. She blew up Backer and as it turns out Backer was her ex-boyfriend. The team would have liked to have questioned Murphy, but she left the base and no one knows where she went. The MPs later found her at Backer’s place. She went there for some reason and so that made the team believe even more that she was guilty. They thought she returned to the scene of the crime to revel in the murder.

They later brought Murphy in for questioning. They asked her several times about her relationship with Backer and she said she loved him. She said she would never think about hurting him. She went back to his place because he was the only one that she could trust and she said she hadn’t known what to do after supposedly killing someone. Only Murphy didn’t have an answer for why she failed to follow a command from her CO. She was panicking and so Gibbs tested her. He tested her with the Marine chant. And Murphy failed to hear him.

Murphy is deaf. She’s been losing her hearing to the point where she can’t hear her CO give her orders and she’s been hiding it by reading people’s lips. She’s gotten very adept at that. She was following the investigation by reading lips. She was also hiding something and is refusing to say what happened though the team thinks they found out her secret. They learned that Murphy went with her boyfriend Backer as he was showing off a new long-range missile that uses sound rather than bullets and that she didn’t have on her earmuffs when it tested it out for her.

It was this new weapon that caused Murphy to lose her hearing. At first, her ears were just ringing. She even thought she would get her hearing back and so Backer had helped her to cover it up. They were doing fine until she lost all of her hearing. She still wanted to cover it up and Backer told her that she had to inform her CO. They both knew what would happen once she did. She would lose her job and it would have been his fault. The team believed that was a good enough motive to kill Backer.

There was just one problem with that theory. She had an airtight alibi. Murphy was at work and she was seen work long after the window of opportunity had passed. She couldn’t have killed Backer, but she was still hiding something. Each time they pushed her on it, she would give them something else and this last time she told them about Backer’s stepbrother. It seems Backer and stepbrother have been fighting over the family home. The stepbrother, Ronald Kepczak, had had permission to be on the property in the beginning and that all changed after he put in a sound-proof studio.

Ron was a musician. He had needed someplace to practice and so he resented Backer for taking the studio from him. He just didn’t hate him enough to kill him. Ron has an alibi for the night in question and so the team decided to check out the house for themselves. They wanted to see why Backer needed a sound-proof room and it turns out Backer was holding the sonic weapons there. The new ones that took his girlfriend’s hearing. There was no reason why Backer had them in his possession and the only reason anyone could think of was that Backer was intending to sell this weapon to an arms dealer.

The team followed Backer’s last movements and they learned more about him. They learned he forged his girlfriend’s signature to get his hands on those weapons. He had even gotten into a fight with Murphy about those weapons and he told her he couldn’t explain why he needed those weapons because it might put her at risk. That’s what she was hiding. Murphy was hiding the fact her boyfriend was into something nefarious and she said she didn’t tell anyone because she didn’t want them to think of Backer that way.

Murphy still believes Backer was honorable. It didn’t matter that he forged her signature or that he was having secret meetings. She said he must have had his reasons. The team, however, was skeptical. They investigated the people Backer was in contact with and they found out that Backer had stolen the weapons to prove a theory. He wanted to prove how harmful they were. He apparently had written several reports in the past about how faulty the weapons are and each of them had been buried.

They were buried by the private contractor in charge of those weapons. Mr. Geary buried the reports because he was trying to sell his share int the company, but he has an alibi and so the team asked who he was selling his shares to. Geary was selling his shares to George Ingram. Ingram was Murphy’s CO when she blew up her boyfriend and he usually didn’t handle field testing. He did it that day because he reassigned himself and so the team went looking for him. And they found him knocked unconscious at Murphy’s place.

Ingram tried to attack Murphy, but she fought him off and it’s a shame that she lost her job because she really is a great Marine.

And Gibbs must have been thinking the same because he found a job for her as a civilian liaison with a new military contractor.