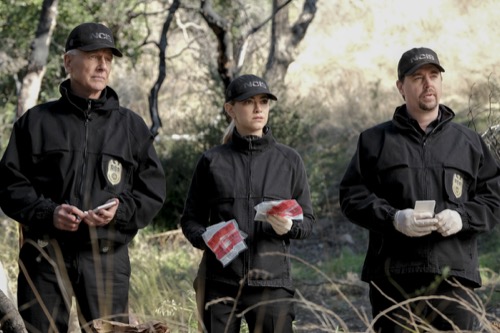 Tonight on CBS NCIS returns with an all-new Tuesday, February 11, 2019, season 17 episode 15 called, “Lonely Hearts” and we have your weekly NCIS recap below. On tonight’s NCIS season 17 episode 15, “Lonely Hearts as per the CBS synopsis, “The lead suspect in an NCIS murder investigation is a woman Gibbs’ friend met on a dating site. Also, Sloane has a secret admirer on Valentine’s Day.”

Torres was back at work. He was going stir-crazy being at home and so he came back to work early. He couldn’t have come at a better time. The team had a new case. They were called to the scene of an apparent homicide that happened on a popular hunting trail and their victim was identified as Navy Captain Alan Wales. Wales was found dead and in his underwear. His clothes were found nearby behind a log along with some identification. Wales was also shot to death. He was shot by an arrow straight into the heart and then left to rot for weeks.

Wales has been dead for approximately six weeks before he was found. Prior to that, he was on the dating app known as Fleet Date and it was used by navy personnel. The team looked into his usage of this app. They figured his date might have been the last person to see him alive and so they found her. Her name is Stacy Gordon. She’s since moved on from Wales and she was dating Gibbs’s friend Phil. Phil and Stacy have been together for four weeks. She was dating Wales before and the relationship ended because she thought he ghosted her.

Stacy also wasn’t that disappointed by Wales ’s death. He was a player and she believed he was seeing other people behind her back. Stacy had an alibi as well. She was out of town for work and there were plenty of witnesses to back that up. Stacy wasn’t their culprit. They were looking for someone who wanted to humiliate Wales. They stripped him down so that he could be found naked and they shot him in the heart because they thought that was the only way to break it. And so Sloane said they were looking for someone who felt humiliated themselves.

Someone like one of the women Wales could have been juggling. The team were looking into it when they were notified about the similarities of their case to another case. This second victim was Chief Petty Officer Craig Olson and he was murdered by being shot in the heart by an arrow. He was also on the dating app Fleet Date. He had been seeing several women and one of them turned out to be Stacy. Stacy was the only connection between Olson and Wales. She was either killing these men herself or someone close to her was doing it.

The team decided to investigate the first theory. The found out that Stacy had a few days off while she was working in Atlanta and so they suspected she used that time to drive back to town to kill Wales. She also did not have an alibi for Olson. The team suspected she killed both men and so they brought her in for questioning. Stacy came of her own accord. She didn’t bring a lawyer and she answered all of the questions. Stacy held nothing back. She told them that she was watching movies in her hotel room when Wales died and she also added that she had no reason to kill the men.

She didn’t care about them. They were just dating and Stacy claimed it was all a coincidence. She even repeated herself when Gibbs brought up her late husband. Stacy used to be married to Mark Tucker and his death had been accident. He supposedly died after a fall. He was drinking and he lost his balance. The local police had written it off as an accident. They also refused to hear a bad word about Stacy because she grew up in the area and the local sheriff had taught her how to shoot with a bow and arrow.

The team had looked photos of her late husband’s accident. They could tell from the pictures that the story about it being an accident didn’t match up with the wounds and so the team believed Stacy killed her husband as well. They wanted to test her hair against the hair they had found on the arrow point. Only Stacy wasn’t going to give them a sample of her hair. They had to use Phil and so Phil tried to grab a piece of his girlfriend’s hair. And unfortunately she caught him stealing the hair from her brush.

Stacy broke up with Phil. She also gave him a sample of her hair as a parting gift and so the test still had it tested. It came back as a negative. Stacy wasn’t their killer and they ruined her relationship with Phil. Phil fell into a depression after the breakup. He began singing breakup songs and drinking milk. He was so depressed that he said he wanted to be like Gibbs and Gibbs told him he deserved better. Gibbs later returned to work. He and the team found another link between the men.

They found out both men were taking meth. They were buying it from a nutritionist who ran a supplemental pill company and neither of them men knew that the pills they were buying had meth in them. They just thought that they were buying virility pills. The nutritionist withheld several facts from them, but he wasn’t their killer. He was seriously injured months ago and his shoulder was never right again. He didn’t have it in him to use a bow and arrow. Gibbs was just wondering where to go next when he got a call from Phil.

Phil called because he went by Stacy’s place. He said someone had broken in and he also believed they were still in the house. No sooner did he say that the phone call was cut off. The team raced to Stacy’s home and they didn’t find her or Phil. They did however run into the sheriff from Stacy’s hometown. It turns out the sheriff is a friend. She covered up the husband’s murder because he was abusive and Stacy was only fighting back. Stacy’s husband’s family was also quite vindictive and that’s why they covered up what happened.

The sheriff mentioned how the family still blamed Stacy anyways. She also said that the only person that didn’t blame Stacy was her husband’s cousin, Tom Logan. Logan was sweet on Stacy and he recently moved into the area. The team went looking for him and they were told he didn’t show up to work. Logan was the one behind everything. He kidnapped Stacy and Phil because he thought killing Phil would mean he and Stacy get to be together. And so Stacy burst his bubble.

She told him she never loved him. Logan was going to kill both her and Phil when the team found them and Gibbs killed Logan.

Phil also managed to get Stacy to take him back and so it was a happy valentine’s day for everyone.

And that includes Torres who took some time away to rest up.