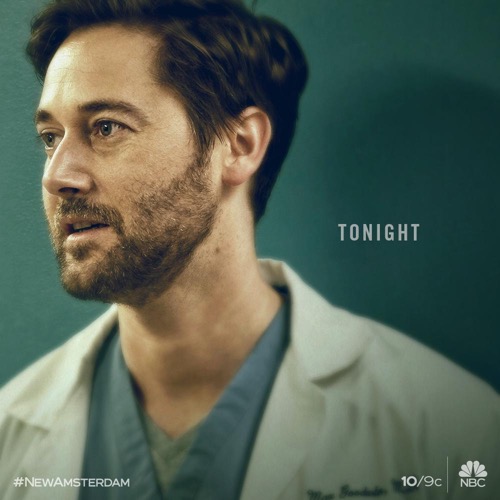 Tonight on NBC New Amsterdam airs with an all-new Tuesday, January 14, 2019, season 2 episode 10 called, “Code Silver,” and we have your New Amsterdam recap below. On tonight’s New Amsterdam season 2 episode 9 as per the NBC synopsis, “With the hospital on lockdown after the patients from Rikers escape from their beds, Helen and Max find themselves in a situation that could cost them their lives.

Meanwhile, Bloom must put aside her pain to help a patient in need, and Iggy is forced to come to terms with the issues in his marriage.

Max runs to see Helen after she has been demoted. He is going to do something. Helen tells him there is nothing he can do. She is lucky to have a job still. She needs time to think. It might be time for her to go, she tells him. Meanwhile, Laura is begging Zach to tell her he took her pill. She didn’t. Iggy talks to Martin. He needs to explain about the adoption. He is interrupted by an employee who is there for a performance review. Martin storms off. Iggy chases after him. He just needs an hour.

In the ED, the nurse notices a patient is missing and a guard is laid out on a bed behind a curtain and his gun is missing. They call Code Silver. Laura and Zach hide out in a patient’s room. They realize her appendix is about to rupture. Max is called from the nursery. The police arrive as people find rooms to hide in. Vijay looks for Ella frantically. Floyd tells the OR they need to focus even if they are in lockdown. One of the female prisoners comes into the observation room in scrubs.

Max helps security evacuate patients. He tells Helen that Jackie from Rikers is behind this. Laura works on the patient with appendicitis. Vijay finds Ella and tries to help her focus on organizing the closet they are locked for the time being. Max and Helen find a trail of blood in the hall. It leads them to a patient who tells them she was separated from her group. The female prisoner makes her way into the OR while Floyd is operating.

Laura starts operating on her patient while Helen learns the patient they found is from Rikers and is part of Jackie’s plot. She tells Max who runs to tell Floyd but he doesn’t make it there. Another prisoner stops him. She has a gun. He tells her he can get her out of there. They head back to Helen and the other female prisoner.

In the OR, Jackie finally makes her move, stabbing the patient on the table. Floyd gets stabbed in the process. Jackie runs for it.

The two female prisoners get a text. They want to get into the OR not out of the hospital. Helen tells them she knows away.

Martin and Iggy sit and talk with the employee Iggy was planning to fire. She is a psychologist who delves into their problems.

Laura forgoes her pain meds to operate on the patient. She is in pain but manages to complete the procedure.

Ella starts to panic when gunshots sound outside of their room. She doesn’t feel the baby moving. Maybe all of the stress?

Floyd is losing it during surgery as he works while he is bleeding. Duke has to jump in and compress his wound, making him become more alert and stop the bleeding.

Helen and Max get the two prisoners past one guard as they head to the OR. Max thinks this is a bad idea but Helen tells him he needs to trust her.

Iggy has a breakthrough when he shares through tears that he can’t stop helping people, to the point where it is ruining his relationship because there is nothing else about him that is good. He is fat, worthless, a loser. And if Martin really saw him, he would leave him. Martin tries to comfort him.

Ella cries. She is going to be a bad mother. Vijay listens to the baby’s heart. He tells her she will be a wonderful mother and that her OCD can be valuable as a mother. He tells her to envision her baby and her best life.

Helen leads the prisoners into a nest of cops. They are taken down. Max runs to the nursery. Everyone comes out of lockdown. Iggy and Martin kiss. Iggy tells his employee she passed her review. Zach confesses to Laura that he took the pill and he needs help. She rubs his cheek as he breaks down before she kisses him. She tells him when he finishes rehab not to call her, text her or email her.

Floyd’s fiance arrives. She was scared. Life is short. She is going to turn down the job. He tells her no, San Francisco sounds good to him.

Helen apologizes to Max for putting him in danger. He tells her she needs to do what she wants, go where she wants. She tells him she isn’t going anywhere.