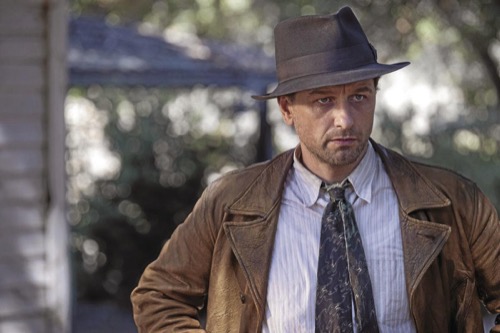 Tonight on HBO their new series Perry Mason Based on characters created by author Erle Stanley Gardner, airs with an all-new Sunday, July 19, 2020, episode, and we have your Perry Mason recap below. In tonight’s Perry Mason season 1 episode 5 called “Chapter 5,” as per the Showtime synopsis “Mason and Della run a solemn errand up north, while Strickland tracks down the sergeant originally assigned to the Dodson case.

Before returning to L.A., Mason drops in on his ex-wife Linda and son Teddy, hoping to make amends for his recent shortcomings. Disturbed by Emily’s blind faith in Sister Alice and her new lawyer, Frank Dillon, Della sets out to find Mrs. Dodson’s more capable legal representation.”

Perry Mason the season 1 episode 5 airs at 9 PM – 10 PM ET on HBO. Make sure to bookmark this spot and come back for our Perry Mason recap! While you wait for the recap make sure to check out all our television recaps, news, spoilers & more!

Della cries hysterically after finding EB dead in his house after he commits suicide. Later, Perry arrives. He consoles her. They bring EB’s body upstairs. Della preps him as if he died in his sleep.

Della meets with an insurance agent. She tells the man that EB was found in his bed, dead. She later gets on a train with Perry headed to San Francisco. Meanwhile, Alice and Birdy are counting to get church donations. Alice would like $25k to help Emily. Birdy and the church officials share that they need to cove overhead and more. Determined, Alice threatens to relieve Birdy if she doesn’t bring her the sick and helpless. She also wants the money.

Perry and Della meet with E.B.’s son Byron who could care less that his dad is gone. He shares that the rest of the family didn’t career either. After, Perry and Della get drunk and talk about why E.B. would do such a thing.

The next morning, Perry checks out ahead of Della from the hotel and takes a ride on the back of a truck with some workers. He gets dropped off and heads to the home of his ex, Linda. She lets him visit with his son even if he is a little drunk still.

Out on bail after help from Alice, Emily is brought to sister and Birdy. Back at Linda’s, she tells Perry he hasn’t been a father. Her husband arrives and things become uncomfortable for them. Ed, Linda’s husband is nice to Perry who clearly wants to leave.

Officer Drake attends church with his wife. Della drops by to see Emily at Birdy and Alice’s. Della learns that Emily’s new lawyer is there. They all sit to discuss the case. The lawyer would like to know if E.B.’s approach was.

Della visits a friend in the business. She needs to find Emily a new lawyer asap. Her friend tells her that the case is a career killer.

Officer Drake and his wife head to the beach with another couple. The ladies lounge in the water while the men talk on the beach. An officer comes by and tells Drake, his wife, and the couple they need to leave the beach, it is too crowded. Drake’s wife questions the officer who doesn’t back down. It appears he is targeting them because of their race.

The dirty detective Ennis tells Pete that Holcomb is the one with his thumb on the Dodson case. Pete meets with Perry to tell him about Ennis. Perry shares the news about E.B. and how he cannot pay him. Pete doesn’t care about the money.

Alice holds a service. She brings a man on stage who hasn’t walked in a long time. After preaching, the man gets up and walks. Alice screams with excitement. Birdy looks annoyed.

It is clear to Della that the new lawyer Frank was appointed by the DA’s office and that he is dirty when she eavesdrops on a call. She takes the files and hides them at her house.

Perry arrives later to taunt Frank. He throws books at him. Perry then visits Della. He is mad that this case has no chance even if they do not have any physical evidence. His rant gives Della an idea. She creates some documents.

The next day they visit Emily, Alice, and Birdy. They tell them Perry has been apprenticing with E.B. and will take the bar soon. They also share that George didn’t kill himself. They agree to hire Perry.

Perry gets some help from Della’s friend and passes the bar. He takes an oath, officially becoming a lawyer.