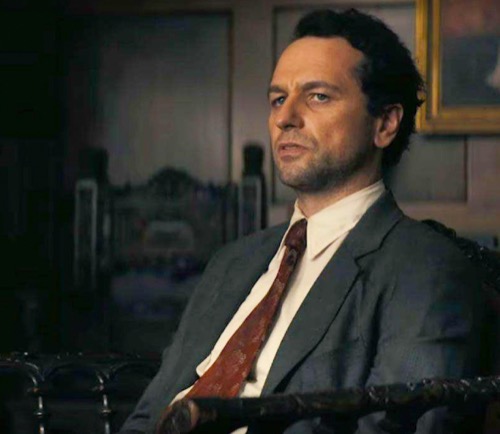 Tonight on HBO their new series Perry Mason Based on characters created by author Erle Stanley Gardner, airs with an all-new Sunday, August 2, 2020, episode, and we have your Perry Mason recap below. In tonight’s Perry Mason season 1 episode 7 called “Chapter 7,” as per the Showtime synopsis “Mason puts Herman Baggerly on the stand in an attempt to expose the hidden link between the Radiant Assembly’s staggering debt and Charlie’s ransom.

Sister Alice faces mounting pressure from the church elders about her promises for a “resurrection.” Strickland loses track of a key witness, while Drake’s detective work opens a new avenue in the case.”

Perry Mason the season 1 episode 7 airs at 9 PM – 10 PM ET on HBO. Make sure to bookmark this spot and come back for our Perry Mason recap! While you wait for the recap make sure to check out all our television recaps, news, spoilers & more!

Years before, Birdy and Alice are out in the middle of nowhere when their car breaks down. Alice stands in a field nearby, listening to an unseen voice. Out of nowhere, a man arrives to help them. Birdy shares that they have nothing. The man offers to help, eyeing Alice. Birdy calls her overlooking upset and disgusted.

Present Day – Alice, Emily, and Birdy sit for a meal. Tension is high between Birdy and Alice. Meanwhile, Perry visits in the night with a man, Mr. Hicks, who bought land from Herman Baggerly and another man, Eric Seidel. They talk about George Gannon possibly rigging numbers for Eric Seidel.

Officer Drake collects a file after hours from Ms. Nina. It is an internal file for Emily Dodson. Across town, Alice is performing her radio show when the elders come in with the man she supposedly healed the week before. They call her out on air. The man cannot walk again. She says it is because he lacks fate.

Headed into court, Perry is accosted by a woman and several others. Inside, Perry questions Hicks on the stand. Perry questions Hicks about the church and missing money. Perry has the financial records brought in to prove the church was in financial trouble. On recess, Pete shares with Perry that he has proof that Ennis, Seidel and some of the others were all working together prior to Colorado.

Herman takes the stand. Perry cross-examines him. Perry points out that Herman made lots of donations to the church but just 3 weeks after refusing to donate his grandson was kidnapped. Just then, several men come into the court dressed in sheets with stink bombs. They all rush out of the court. Della and Perry warn Emily against going out in public or the cemetery. Meanwhile, Pete follows Seidel.

Seidel starts to realize that Pete is following him. Pete chases after him through crowds but loses him following someone who is dressed like Seidel.

Perry heads to have a drink. He sees Lupe. She breaks the news that she bought his house at auction. He is upset. Meanwhile, Della has a drink with Hamilton. She asks for advice about Emily’s case. They joke about one another’s lovers.

Pete tells Perry he last the trial on Seidel. When Perry begins to yell, Pete tells him he is done on the case. He has taken enough of Perry’s crap.

Officer Drake arrives at a hotel. He asks about two men. The manager won’t share any information but the maid remembers.

Ennis meets with Seidel to give him a ticket out of town. He pretends to offer him a ride, opening the car door when he stabs him to death.

Drake shows up at Perry’s family home. He tells him how Ennis may have been seen at the hotel and that he also used a woman of Chinese descent to help calm the baby. They think she may be from Madam Jin’s. They head there. Perry thinks he has found the right woman. He gives her money for information. She cries, telling him she wasn’t the woman who Ennis hired. The woman who did help Ennis was hooked on heroin and died after Ennis paid a visit the other night. Just then, several men come in and beat up Perry. Drake comes out of nowhere and saves Perry.

Alice catches Emily smoking outside. They talk about George and how he called Emily the day Charlie died. He loved Charlie like his own. They get to talking about faith and how Alice hasn’t brought Charlie back yet. Alice feels like Emily doubts her.

Perry pays the morgue a visit to see the body of the Chinese woman. Perry asks about a baby who nurses from a mom on heroin. The mortician shares that a baby would suffocate. The next day, Perry tracks down Emily to talk but she ignores him as she rides into the cemetery.

Crowds gather as Alice tries to resurrect baby Charlie. She opens the gasket and it is empty. Everyone goes crazy. People begin to fight. Birdy gets pushed. Emily breaks down hysterical. Perry tries to help. Birdy and Alice are rushed away in the car. Della saves Perry and Emily from the crowds, driving them off.

While leaving the cemetery, Birdy and Alice come across a crowd. One woman is holding a baby. They believe it is Charlie. Birdy holds the baby. She tries to talk to Alice who runs away instead.